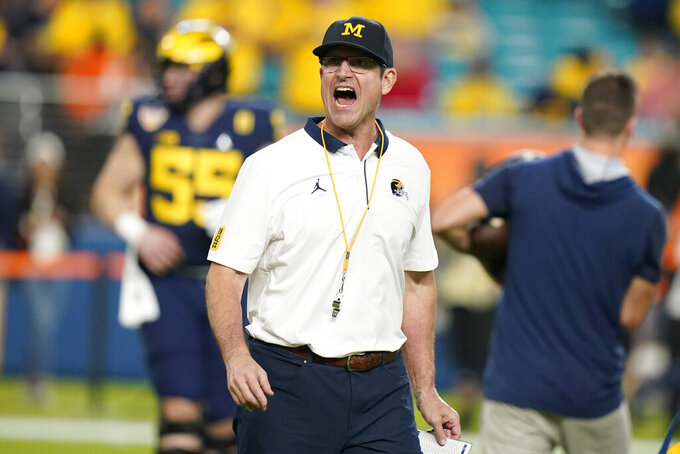 MINNEAPOLIS (AP) — Jim Harbaugh has taken a step toward a potential return to the NFL.

Harbaugh and the Minnesota Vikings had an exploratory conversation about the team's head coaching vacancy Saturday, a person with knowledge of the process told The Associated Press.

The person, who spoke on condition of anonymity because the team was not publicizing the interview, said both sides were gauging interest. The Vikings made the formal request earlier this week to speak with him.

A message seeking comment was left with Harbaugh, whose seventh season at Michigan ended last month with a loss to Georgia in the College Football Playoff.

The Vikings hired former Cleveland Browns vice president of football operations Kwesi Adofo-Mensah as general manager this week, and they're still searching for a coach.

The 58-year-old Harbaugh could be a good fit with Adofo-Mensah, who is a first-time GM at age 40. Adofo-Mensah started working in the research and development department with the San Francisco 49ers in 2013, when Harbaugh was in his third of four seasons coaching the team.

Might Michigan's khaki-wearing coach be ready to leave his alma mater?

Harbaugh is 61-24 with the Wolverines, who he led to a win over rival Ohio State last season for the first time under his guidance. They went on to end a school-record, 17-year streak without a Big Ten championship and made the four-team national playoffs for the first time in eight years under the current format.

The former NFL quarterback was 44-19-1 as San Francisco's coach from 2011-14 and 5-3 in the playoffs, helping the 49ers reach the Super Bowl after the 2012 season. They lost to the Baltimore Ravens, who were coached by his brother, John Harbaugh.

A little more than a year ago, Michigan gave Harbaugh a new, five-year contract that cut his guaranteed compensation and gave him an opportunity to make up for the financial loss with performance bonuses. Harbaugh bounced back to produce his best season with 12 wins.

The Vikings fired general manager Rick Spielman and coach Mike Zimmer after a second straight absence from the playoffs. Zimmer went 72-56-1 in eight seasons and 2-3 in the playoffs.

The Vikings also conducted a virtual interview on Saturday with New York Giants defensive coordinator Patrick Graham. They have now spoken with 10 candidates, including Harbaugh.

The Rams and 49ers play on Sunday in the NFC championship game.