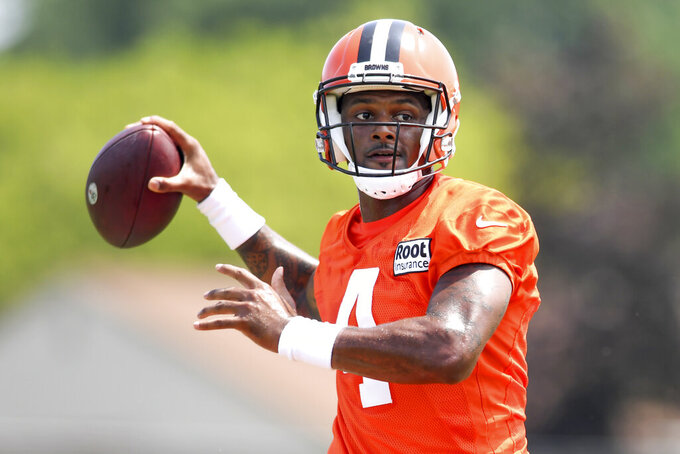 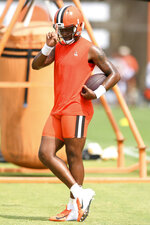 Cleveland Browns quarterback Deshaun Watson would accept an eight-game suspension and $5 million fine to avoid missing the entire season, a person familiar with his defense told The Associated Press on Thursday.

Watson, who is facing a potential year-long ban for sexual misconduct, would agree to a lesser penalty in a settlement, said the person who spoke on the condition of anonymity because of the sensitivity of the case.

The biggest question is whether the NFL would make this compromise.

A settlement has always been possible, but it’s not clear if the sides are in active discussions.

The league is seeking a minimum suspension of 17 games, a significant fine over $5 million and wants Watson to be required to undergo evaluation and treatment as determined by medical experts before he could be reinstated.

An independent arbitrator suspended Watson, accused of lewd sexual behavior during massage appointments with two dozen women while he played for the Houston Texans, six games for violating the league’s personal conduct policy on Aug. 1.

Asked Tuesday at the owner's meetings why the appeal was filed, NFL Commissioner Roger Goodell said: “Because we’ve seen the evidence.”

“She (Robinson) was very clear about the evidence. She reinforced the evidence, that there was multiple violations here and they were egregious, and that it was predatory behavior,” Goodell added.

“Those were always things we felt was really important for us to address and in a way that’s responsible.”

Harvey’s decision “will be binding,” per the collective bargaining agreement. However, the NFL Players Association could try to challenge his ruling in federal court. A settlement would avoid that.

Meanwhile, Watson is scheduled to make his debut for the Browns on Friday night in their exhibition opener at Jacksonville. The three-time Pro Bowler has continued to practice during his high-profile case, which has brought renewed criticism of the league’s handling of player discipline.

The Browns, who have spent years looking for a franchise QB, traded three first-round draft picks to Houston in March for Watson and then signed him to a five-year, $230 million contract.

Cleveland’s plan all along has been to play Jacoby Brissett, who has made 37 career starts, while Watson serves a suspension. However, that could change if Watson is out much longer or for the entire 2022 season.

One possible option for the Browns could be Jimmy Garoppolo, who has been supplanted as San Francisco’s starter by Trey Lance and is expected to be either traded or waived this month by the 49ers.