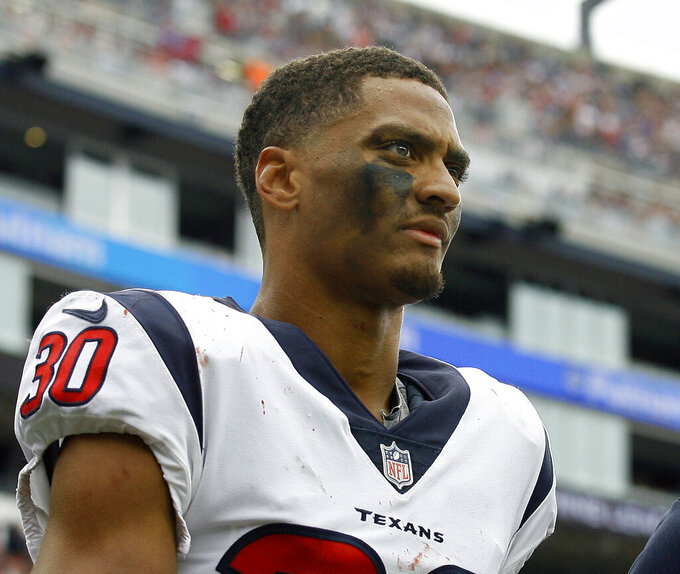 FILE - In this Sept. 9, 2018, file photo, Houston Texans cornerback Kevin Johnson (30) leaves the field during the second half of an NFL football game against the New England Patriots, in Foxborough, Mass. A person with direct knowledge of discussions has confirmed to The Associated Press that the Buffalo Bills have agreed to sign free agent cornerback Kevin Johnson. The person spoke to The AP on Monday, March 11, 2019, on the condition of anonymity because the signing won't be official until the NFL's new year begins Wednesday. (AP Photo/Stew Milne, File)

With more than $70 million of space available under the salary cap, he's also proving to be busy.

The people spoke on condition of anonymity because the signings won't be official until the NFL's new year begins Wednesday.

The Bills are coming off a 6-10 season and were left with plenty of salary cap space after spending the past two offseasons purging high-priced and under-achieving talent.

The Bills focused their initial attention on upgrading an offense that was a work in progress under rookie starting quarterback Josh Allen last year. Buffalo finished 30th in the NFL in yards gained and featured a patchwork offensive line and an unproven group of receivers.

The biggest splash is the addition of Morse.

He fills an immediate need in addressing a position that featured a revolving door at center after Eric Wood retired due to a career-ending neck injury. Morse spent his first four seasons in Kansas City, where he started 49 games.

Listed at 6-foot-6 and 305 pounds, Morse is expected to provide on- and off-field leadership as well help better protect Allen, who was sacked 28 times in 12 games.

Kroft agreed to a three-year contract that will pay him a base salary of $6.25 million per season and has a potential value of $21 million, one person said. He spent his first four years with Cincinnati and fills an immediate need on a Buffalo roster that currently features one tight end, Jason Croom.

A foot injury limited Kroft to four catches for 36 yards in just five games with the Bengals last season. He enjoyed a career year in 2017, when he had 42 catches for 404 yards and seven touchdowns.

Another person said Gore agreed to a one-year, $2 million contract. He is the NFL's active leader in yards rushing and returns for a 15th season after spending last year with Miami.

He continues to be productive after finishing with 156 carries for 722 yards and no touchdowns in 14 games with the Dolphins. He added 12 catches for 124 yards and one score.

The 35-year-old will join 30-year-old LeSean McCoy in forming what would be the NFL's oldest — and most historically productive — running back tandem.

The two are close friends, share the same agent and have spent previous offseasons working out together.

Gore is also in line to have another connection in Buffalo, after the University at Buffalo extended an offer to his son, Frank Jr., to play for the Mid-American Conference school last month.

A third person said Johnson agreed to sign with Buffalo four days after making the Bills the first team he visited after being cut by the Houston Texans. He will compete for the starting job opposite Tre'Davious White.

The 26-year-old Johnson was selected by Houston in the first round of the 2015 draft but never played to expectations because of injuries.

He was limited to playing in only the Texans' season opener last year. He was placed on injured reserve after his second concussion of the summer. A broken foot and sprained knee limited him to a combined 18 games from 2016-17.

Overall, Johnson has one interception in 35 games, including 18 starts.