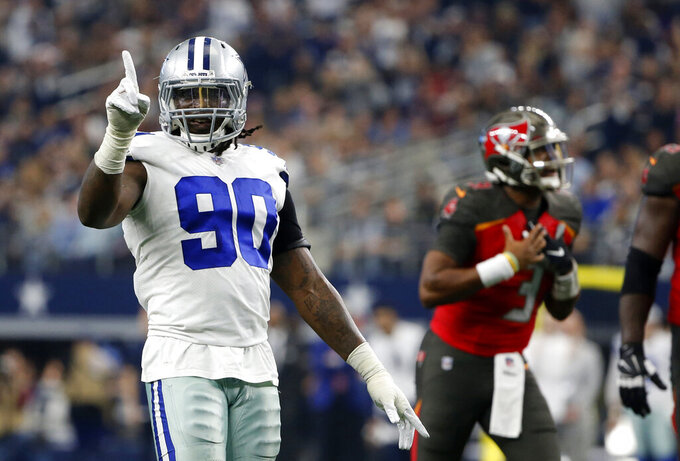 FILE - In this Dec. 23, 2018, file photo, Dallas Cowboys defensive end DeMarcus Lawrence (90) celebrates as Tampa Bay Buccaneers quarterback Jameis Winston shouts in the direction of an official after throwing an incomplete pass during the second half of an NFL football game in Arlington, Texas. A person with direct knowledge of the deal says the Cowboys have agreed on a $105 million, five-year contract with Lawrence. The agreement will include $65 million in guaranteed money, the person told The Associated Press on condition of anonymity Friday, April 5, because the deal hasn’t been announced. (AP Photo/Michael Ainsworth, File)

DALLAS (AP) — DeMarcus Lawrence has the long-term contract he felt he deserved after the star defensive end for the Dallas Cowboys played one season under the franchise tag.

Lawrence and the Cowboys have agreed on a $105 million, five-year contract with $65 million guaranteed, two people with knowledge of the agreement told The Associated Press on Friday. The people spoke on condition of anonymity because the deal hasn't been announced.

The sides had until July 15 to work out a long-term contract after the club used the franchise tag on its best pass rusher again. A year ago, Lawrence signed the $17.1 million offer right away. This time he didn't, and had been putting off shoulder surgery while negotiations dragged.

The talks heated up quickly this week, not long after executive vice president of personnel Stephen Jones said at the NFL owners meetings that Lawrence and his representatives were at an impasse. They didn't get close to a long-term deal last year.

Lawrence tweeted soon after news of the agreement broke , saying "New Number Who Dis?" Cowboys safety Kavon Frazier was a little more specific with his congratulations for one of the leaders of the Dallas defense, writing "SOMEBODY CALL THE BRINKS TRUCK."

Getting an agreement before the draft means Lawrence can participate in offseason activities, pending shoulder surgery. There was a strong likelihood that Lawrence, who turns 27 late this month, would have stayed away from the team without a contract.

The total value of the contract trails only Chicago's Khalil Mack ($141 million) and Von Miller of Denver ($114 million) among edge rushers. Both are three-time All-Pros. While Lawrence has been to the past two Pro Bowls, he's still looking for his first All-Pro nod.

Lawrence earned $17.1 million under the tag last season after finishing tied for second in the NFL with 14½ sacks in 2017. He had another double-digit season with 10½ last year, and is considered one of the better run defenders among pass rushers.

The deal comes about a week after Dallas acquired defensive end Robert Quinn in a trade with Miami. Quinn figures to start opposite Lawrence unless Randy Gregory is reinstated from his fourth substance-abuse suspension.

Lawrence was the first defensive end the Cowboys drafted, trading up to early in the second round in 2014 not long after releasing franchise sacks leader DeMarcus Ware.

The former Boise State player's career started slowly, with eight of the nine sacks from his first three seasons coming in his second year. He battled injuries early in his career, and was suspended four games to start the 2016 season for violating the NFL policy on performance enhancers.

The healthiest season of Lawrence's career was his best, when he had 10½ sacks in the first seven games. He has 34 sacks in 64 games in his career.