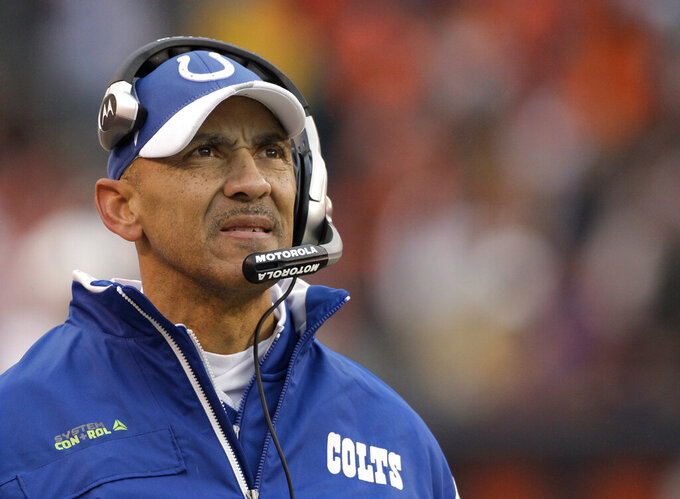 FILE - In this Nov. 30, 2008, file photo, Indianapolis Colts coach Tony Dungy watches from the sideline as his team plays the Cleveland Browns during the third quarter of an NFL football game in Cleveland. Dungy is the first African-American head coach to win a Super Bowl and has been a strong advocate of more diversity in coaching hires. (AP Photo/Amy Sancetta, File)

The NFL is amending the Rooney Rule to require more interviews of minority candidates for head coaching and coordinator positions, two people familiar with the decision told The Associated Press.

Reacting to a lack of diversity progress in hirings for those jobs, the league will require teams to interview at least two minority candidates from outside the organization for head coach openings. At least one minority candidate must be interviewed for a coordinator's spot, the people told the AP on condition of anonymity Monday because the NFL has not announced the rule additions.

The rule, named after the late Dan Rooney, who owned the Pittsburgh Steelers, was adopted in 2003. It has had some impact, but in the recent spate of coach hirings, few have gone to minority candidates.

During a Super Bowl week news conference, Commissioner Roger Goodell admitted that changes were needed to the rule. Those changes are coming now.

Team owners will hold a conference call Tuesday that replaces the scheduled spring meeting in California. They will vote on two proposed resolutions that would allow assistant coaches to be interviewed at any time for coordinators’ jobs elsewhere. The other proposal would use draft pick positioning as an incentive to hire more diverse candidates in the coach and general manager position.

The changes and proposals were first reported by NFL Network.

“The Rooney Rule does not force someone or cannot mandate that someone gets hired,” NFL Executive Vice President of Football Operations Troy Vincent told the AP last season. "What it does is mandates that there is a diverse slate of prospects.

“Many will say it’s not about a number just because of the number of men of color that play, there should be a certain number of head coaches or general managers or (team) presidents,” added Vincent, who is black.

Team presidents and other top-level executives posts are being addressed with these changes.

“We’ve got to look at the entire landscape," Vincent said. "We should be looking at diversity among all disciplines in our sport.”

After the 2018 season, eight head coaches lost their jobs. Only one opening was filled by a minority candidate, Brian Flores in Miami.

Following last season, five jobs came open and one minority, Ron Rivera, was hired, by Washington. That makes four minority head coaches out of a possible 32 in the league: Flores, Rivera, Mike Tomlin of Pittsburgh and Anthony Lynn of the Los Angeles Chargers.

The NFL has only two general managers of color, Andrew Berry in Cleveland and Chris Grier in Miami.

Tony Dungy, the first African-American head coach to win a Super Bowl and a strong advocate for diversity in the NFL, believes the spirit of the Rooney Rule has not been adhered to in recent years.

“What I think has happened is people have said, `Let me interview a minority candidate to satisfy the rule, and then I can get on with this hiring process or hire who I want to,” the Pro Football Hall of Fame coach said. "The whole point of it was to slow down the process, take your time, get the best candidate and make a decision.

“There's so much pressure now on all of them to do it quickly, get the No. 1 candidate, put together a staff. Nobody wants to take their time. That is the major problem. You get people interviewed who may not fit what the team may be looking for.”