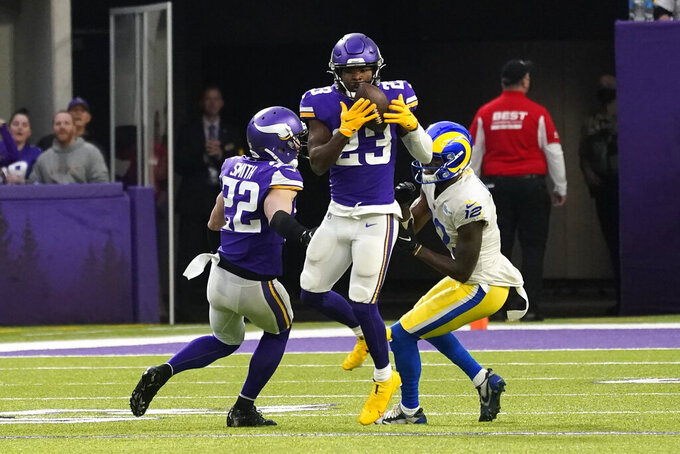 CHARLOTTE, N.C. (AP) — The Carolina Panthers moved quickly to upgrade their roster after a 5-12 season.

The people spoke to The Associated Press condition of anonymity Monday because the deals will not become official until the start of free agency on Wednesday.

The 6-foot-4, 306-pound Corbett should help a weak offensive line that surrendered the fifth-most sacks in the NFL last year. Corbett started all 33 games over the past two seasons for the Super Bowl champion Rams. He was a second-round pick by the Cleveland Browns in 2018.

The 26-year-old Woods is coming off the best season of his five-year career, recording 108 tackles and three interceptions in 17 starts for the Vikings. Woods spent his first four seasons with the Dallas Cowboys, for whom he started 48 games and had five INTs.

Woods is expected to start at safety alongside Jeremy Chinn.

The Panthers also lost a key defensive player as linebacker Haason Reddick agreed to terms on a three-year, $45 million contract with the Philadelphia Eagles. Reddick had double-digit sacks in each of the past two seasons, first with Arizona and then with Carolina.

Both Bouye and Fox were due roster bonuses of slightly more than $2 million next week, and the moves will save the team more than $6.5 million in cap space in 2022.

The Panthers are now more than $32 million under the cap.

Bouye played in 10 games and started seven last season for Carolina and had 28 tackles and no interceptions before a foot injury ended his season. Fox started nine games and had 34 tackles and 1 1/2 sacks after signing a two-year, $8.1 million contract in 2021.

With cornerbacks Stephon Gilmore and Donte Jackson hitting the free-agent market, the Panthers could be very young next season at that position. Returning are last year's first-round draft pick Jaycee Horn and C.J. Henderson, acquired from Jacksonville last season for a third-round pick. Both are former top-10 draft picks. The depth at cornerback includes Keith Taylor, Stantley Thomas-Oliver and Troy Pride, all late-round picks by Carolina.

Yetur Gross-Matos is expected to fill Fox's spot on the defensive line.