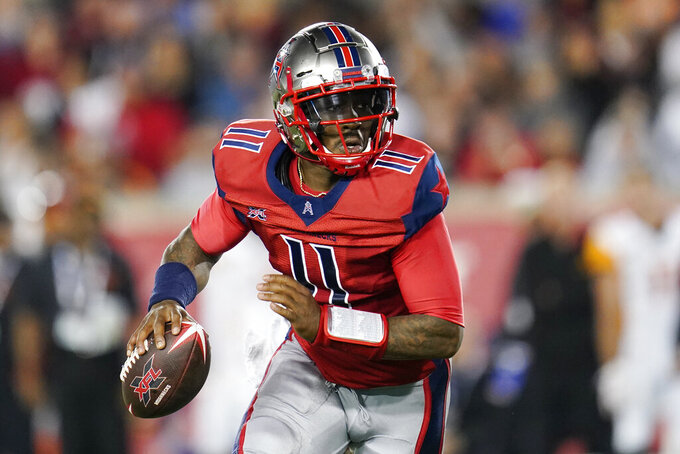 FILE - In this Feb. 8, 2020, file photo, Houston Roughnecks quarterback P.J. Walker (11) looks to pass as he scrambles during an XFL football game in Houston. A person familiar with the situation says the Panthers have agreed to terms on contracts with former XFL quarterback P.J. Walker of the Houston Roughnecks and former Raiders linebacker Tahir Whitehead. The person spoke to the Associated Press on condition of anonymity Monday, March 23, 2020, because the moves have not been announced by the team since the players have yet to pass physicals. (AP Photo/Matt Patterson, File)

Carolina has agreed to terms on a two-year contract with former XFL quarterback P.J. Walker of the Houston Roughnecks, a person familiar with the situation told The Associated Press.

The person spoke on condition of anonymity Monday because the moves have not been announced by the team since the players have yet to pass physicals.

The decision to add Walker prompted the Panthers to trade Kyle Allen to the Redskins, according to a person with knowledge of the move. The person spoke to The AP on condition of anonymity because that deal had not been announced. Allen started 12 games last season for the Panthers and went 5-7 as a starter with 23 turnovers and 17 touchdown passes.

The Panthers have made major changes to their QB room.

Teddy Bridgewater agreed to a three-year, $63 million contract last week to replace Cam Newton, who was given permission by the team to seek a trade. If Newton isn't traded, the team is expected to release him and free up $19 million under the salary cap.

However, after Bridgewater posted on Twitter what appeared to be a photo of him signing a contract, Newton followed by posting on Instagram a video of himself working out late Monday night saying, “I’m hungry now. Hungrier. I’m unemployed. ... you want me to cry? I’m just gonna work.”

With Allen gone and Newton on the way out, the only returning QB is Will Grier, a third-round pick who went 0-2 as a starter as a rookie.

Walker joined the Panthers on the first day that XFL players were allowed to sign with NFL teams.

Both Walker and Whitehead played at Temple under new Panthers coach Matt Rhule.

The 25-year-old Walker was one of the stars of the XFL and a leading MVP candidate, throwing for 1,338 yards with 15 touchdown passes and four interceptions while leading the Roughnecks to a 5-0 record before the league canceled its season because of the coronavirus outbreak.

While playing under Rhule at Temple, Walker threw for 10,668 yards in four seasons with 74 touchdowns and 44 interceptions. He has spent parts of the past three seasons on the Colts practice squad, but has never played a regular-season down in the NFL.

“Couldn’t be happier for @XFLRoughnecks PJ Walker,” Roughnecks director of pro personnel Randy Mueller tweeted. “Love to see guys bet on themselves and be rewarded. Easy to root for good people.”

Whitehead is a more proven player. He's played 125 games with 87 starts and has 633 tackles and five interceptions. He has started 63 games over the past four seasons with the Lions and Raiders. Whitehead had 108 tackles for the Raiders last year.

He could help mitigate the loss of linebacker Luke Kuechly, who retired earlier this offseason.