AP WAS THERE: Packers bombard Chiefs, 35-10, in Super Bowl 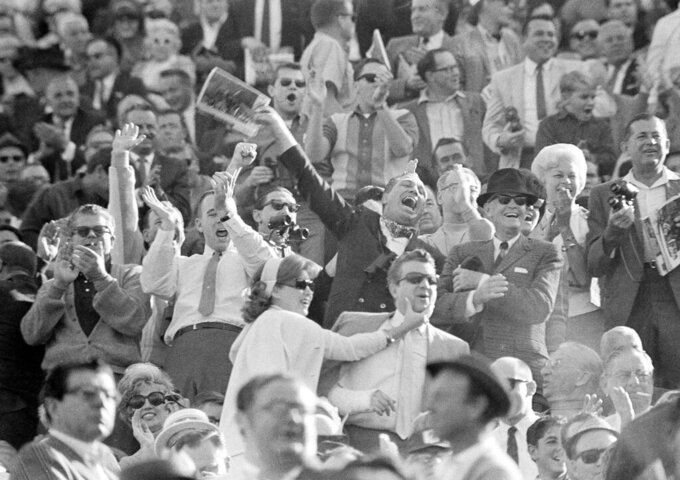 LOS ANGELES (AP) — Green Bay’s proven old pros carried the National Football League to a 35-10 victory over the Kansas City Chiefs of the American League on Sunday in the first Super Bowl under the brilliant direction of Bart Starr. Starr connected with 34-year-old Max McGee for two touchdown passes and sent Elijah Pitts and Jim Taylor hurtling into the line for three more. Vince Lombardi’s NFL champs, held to a 14-10 edge in the first half, put a tremendous rush on Len Dawson, the Chiefs’ passer, in the second half and pulled away steadily. The Packers were two-touchdown favorites going into this first meeting of NFL and AFL champions after the merger of June 1966. The Associated Press is republishing verbatim the story of that game.

Green Bay's proven old pros carried the National Football League to a 35-10 victory over the Kansas City Chiefs of the American League on Sunday in the first Super Bowl under the brilliant direction of Bart Starr.

Starr connected with 34-year-old Max McGee for two touchdown passes and sent Elijah Pitts and Jim Taylor hurtling into the line for three more and a triumph that meant $15,000 for each of the battle-proven Packers. Each losing Chief pocketed $7,500.

Vince Lombardi's NFL champs, held to a 14-10 edge in the first half, put a tremendous rush on Len Dawson, the Chiefs' passer, in the second half and pulled away steadily in a game watched by a crowd of 63,036 in the 93,000-seat Los Angeles Coliseum.

The crowd was smaller than expected and far short of the sellout originally predicted.

The Chiefs threw a scare into the proud Packers with a fine first half in which Dawson hit Curt McClinton for a touchdown and Mike Mercer kicked a 31-yard field goal. But the Packers' pressure was too much for them to handle in a lopsided first half.

In the final minutes of the game, Lombardi went to Donny Anderson and Jim Grabowski, his million-dollar rookies, as his running backs.

McGee, an 11th-year pro who caught only four passes during the regular season and one more in the NFL title game with Dallas, caught TD tosses from Starr of 37 and 13 yards after he took the place of injured flanker Boyd Dowler.

Starr, who did a magnificent job of calling the right play on third-down situations, was named the winner of a new sports car as the most valuable player in the game.

The award is made by Sport Magazine.

Taylor hammered his way home from 14 yards for his TD behind the blocking of Fuzzy Thurston and Jerry Kramer. Pitts slashed home from the 5 and again from the 1 to complete the scoring, while Don Chandler added all five extra points.

The big breakthrough for the Packers came in the third period when they still led only 14-10. Willie Wood intercepted a Dawson pass and ran it back 50 yards to the 5-yard line. Pitts then slammed over on the next play.

McGee, a veteran who appeared to be on his way out because he was used sparingly during the season, wound up the leading receiver in the game with seven catches for 138 yards. His first TD catch was a thing of beauty, a one-handed grab to beat Willie Mitchell, the Chiefs' right cornerback, in the first period.

Starr managed to escape the Kansas City blitz and found McGee free on the 20, and Max ran the ball in to complete a 37-yard play.

Hitting time and again on those difficult third-down situations, Starr completed 16 of 23 passes for 250 yards and the two TDs. He had one intercepted, however, only his fourth of the year. He had thrown 173 consecutive passes without having one picked off before Mitchell grabbed a deep one in the final period.

By an odd coincidence, the final score of 35-10 was exactly the same as in 1950 when the Cleveland Browns from the old All-America Conference upset the Philadelphia Eagles, defending NFL champions. However, this time the shoe was on the other foot, and the old established league managed to cling to its superiority.

Coach Hank Stram's odd-spaced blocking and his changing defenses appeared to bother the Packers in the first half, although Starr usually was able to find his target with a pass when he needed yardage.

Once the Packers began to apply the big pressure on Dawson, the game broke wide open. Lionel Aldridge and Ron Kostelnik got Dawson for an 8-yard loss in the second period, the only time he was smeared in that half. But in the second half, Henry Jordan, Willie Davis, Kostelnik and the blitzing Lee Roy Caffey dragged him down in key situations.

The Packers were two-touchdown favorites going into this first meeting of NFL and AFL champions after the merger of last June. Although the two leagues will meet every year for a world championship in a Super Bowl, they will continue to go their own ways during the regular season until 1970.

As Green Bay already had won about $8,500 for beating Dallas two weeks ago for the NFL championship, this triumph boosted the postseason earnings for two games to $23,500, an all-time record for a team event. The old high was $12,794 by the winning Los Angeles Dodgers in the 1963 World Series.

Dawson had a fine first half in which he hit with 11 of 15 passes for 152 yards and a touchdown. He was getting fine protection and was escaping the Packers rush by rolling out and throwing on the run. Several times he kept the ball and ran for gains.

Bobby Bell, Kansas City's left linebacker, did a fine job on defense, leading all the players with seven unassisted tackles. In the final analysis, it was the ability of Starr to hit his spot with passes over and in front of the cornerbacks that enabled Green Bay to roll.

One Packers bomb, a 64-yard pass from Starr to Carroll Dale, was ruled out and the score nullified because a Packers interior lineman had moved a hand before the ball was snapped.

It didn't hurt too much because Starr took the club in anyhow on Taylor's 7-yard burst for the second score, breaking a 7-7 tie in the second period.

Otis Taylor, the Chiefs' long-ball threat, was held to four catches and total gains of 57 yards, and Mike Garrett, the elusive halfback, was limited to 17 yards on six carries. Garrett did add 60 yards on four runbacks and caught three passes for 28 yards.

Jim Taylor, who might have been playing his last game for the Packers because he still had not signed a contract, led the rushers with 53 yards on 16 carries. He was giving it that famous second effort that picks up vital yardage on third-down situations.

The Packers threw Kansas City passers six times for losses of 61 yards. Dawson wound up with 16 completions of 27, and Pete Beathard, who replaced him in the final minutes, hit with only one of five.

Lombardi got most of the ballclub into the game in the final minutes, letting Zeke Bratkowski throw a pass, using Anderson and Grabowski and playing the veteran Red Mack at flanker on offense.

Dowler suffered a recurrence of a shoulder injury he sustained in the game at Dallas and left the game on the third offensive play. McGee more than made up for his absence. The Packers also were without their first-string center, Bill Curry, who suffered a knee injury in the second period and gave way to Ken Bowman.

Fred Arbanas, Chiefs tight end, played despite a shoulder separation he received in the AFL title game at Buffalo. Fred Williamson, a cornerback, was carried off the field in the final period.

“I think Dallas was a better team,” Lombardi said afterward. “Kansas City is a real tough football team, but I don't think it rates with the top teams in the National League.”

“I don't think they showed us anything different than we expected,” the Packers' pilot continued. "I think we weren't as aggressive as we should have been in the first half — just like in the Dallas game.

“I told them at halftime they had to be a lot more aggressive — to stop grabbing and start tackling. We blitzed more in the second half.”

Lombardi said Wood's interception was a big play. “It took us down there where we could get in to score,” he said.

The coach also paid tribute to Starr: “He was excellent. He got little recognition when we were doing other things (referring to the Packers' awesome ground attack of previous years) but he was the same Starr then. He's always been an integral part of our offense.”

Lombardi said the Chiefs' defense was “very difficult to run against. I thought their secondary played rather loose. They were daring us to throw the ball.”

Asked about McGee's seven receptions, Lombardi said: “We had planned to hit our weak side end, regardless who it was. Dale caught some, too, when he was on the weak side.”

“I was surprised at their strength, particularly in the first half,” Starr said.

Wood said he hadn't been guessing on the interception. “We'll anticipate on a play like that, not guess. We noticed in the films that they usually go to Arbanas on a third down play. And this is what we were looking for.”

“Green Bay just made those big third down plays,” said Kansas City linebacker E.J. Holub. “We didn't give the offense the ball enough. We let Green Bay control the ball, and that's their kind of ballgame.”

Paul Hornung, the Golden Boy of the Green Bay Packers, said Sunday after the Super Bowl game that he hadn't yet decided on whether he was going to retire.

“I'm going to have the doctor thoroughly check me out,” said Hornung. “I'm going to wait and see how my arm is.”