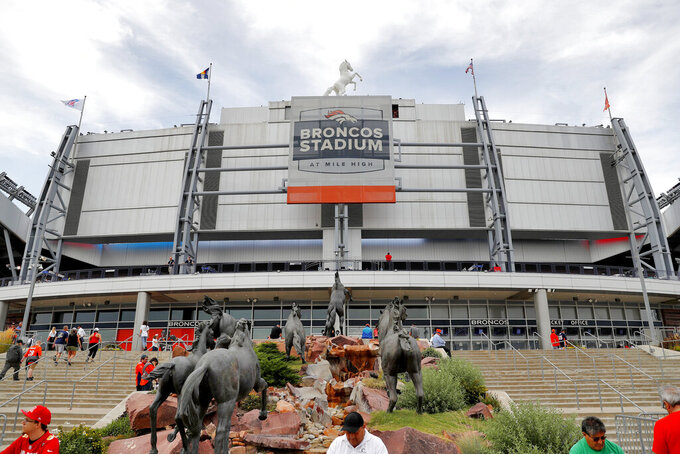 FILE - In this Aug. 29, 2019, file photo, fans head into the Denver Broncos team store below the south scoreboard in Mile High Stadium before an NFL preseason football game between the Arizona Cardinals and the Broncos in Denver. The Broncos announced on Wednesday, Sept. 4, 2019, that they will partner with Colorado-based Empower Retirement on a 21-year deal to name the stadium "Empower Field at Mile High." (AP Photo/David Zalubowski, File)

ENGLEWOOD, Colo. (AP) — The Denver Broncos have partnered with Empower Retirement on a 21-year deal to name their stadium "Empower Field at Mile High."

The Metropolitan Football Stadium District will meet later this week to sign off on the agreement that runs through 2039 and ends a three-year span without a title sponsor for the stadium that opened in 2001.

"It was worth the wait because we found absolutely the best partner," Broncos president and CEO Joe Ellis told The Associated Press on Wednesday.

Ed Murphy, president and CEO of Colorado-based Empower Retirement, the nation's second-largest retirement plan provider, said temporary signage will be in place at the stadium for the Broncos' home opener against the Chicago Bears in Week 2.

"We're excited, we're pumped up for Sept. 15," Murphy said. "Obviously we're pumped up for the Raider game, too" on Monday night in Oakland. "But once everybody comes home and they see the temporary signage, they'll probably think it's permanent because it's going to be classy."

Murphy, whose company is based in Greenwood Village, a few miles from Broncos headquarters, said the signage would be multicolored featuring an orange mountain backdrop .

A person with knowledge of the deal told the AP it is similar to the team's previous naming rights contract, which averaged $6 million a year. The person spoke on condition of anonymity because financial details weren't revealed by either party.

"The district deal will become public and it will reveal what their naming rights agreement calls for in terms of revenues delivered to them. Ours is different. Ours is private," Ellis said. "But, look, it's a significant investment over a 21-year period that's going to significantly help us in maintaining and improving this stadium over the long life of the contract."

The Broncos' stadium was originally called Invesco Field at Mile High. In 2011, Invesco transferred the naming rights to Sports Authority, which signed a 25-year agreement worth $150 million that was supposed to run through 2036. Sports Authority went bankrupt in 2016, however, and the Broncos purchased the remainder of the contract, allowing them to gain control of seeking a new corporate partner.

The Broncos, meanwhile, made all the payments for maintenance and upgrades to the stadium and last year temporarily renamed their home "Broncos Field at Mile High."

Ellis said Empower, which has partnered with the Broncos since 2015 and runs the team's retirement accounts, broached the subject of a stadium naming rights deal a few months ago. "So, we went into the hurry-up offense," Ellis said.

Despite its previous naming rights deals with Invesco and Sports Authority, fans often referred to the Broncos' home simply as Mile High, an homage to the original Mile High Stadium, a baseball-football venue built in 1948.

Sports marketing experts had speculated that the Mile High moniker was an impediment to finding a new naming rights partner, but Murphy said it was actually an enticement for Empower because it's part of the civic fabric in Denver.

"It was never a consideration to remove 'Mile High,'" said Murphy.

Empower was created in 2014 through the merger of three retirement companies and also has sponsorship contracts with the New England Patriots and Kansas City Chiefs in addition to Major League Soccer's New England Revolution.

Ellis called it a big plus to have a national naming rights partner that's also a hometown company.

"I would think in any naming rights deal that should be your No. 1 objective because you're in it together, you're in the same community, you're pulling for each other," Ellis said.