Appreciate Eli for how he met major challenges 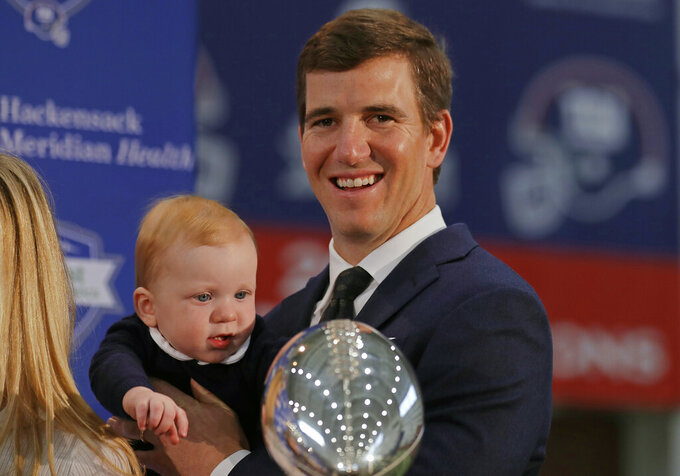 The debate whether Eli Manning is a Hall of Fame quarterback already has begun and will last for the next half-decade.

So why not look back at his achievements without wondering if he is bound for the Canton shrine as his brother Peyton will be next year?

The youngest of three sons of a college football superstar, Archie Manning, Eli's athletic roots were established long before he gripped a football. Older brothers Cooper and Peyton would set a standard almost impossible for anyone to replicate, yet Eli would try.

Give him tons of credit just for that. Cooper would become a high school star in New Orleans as a receiver and wind up at the University of Mississippi, where Archie built his legend. Cooper would be forced to prematurely retire from football with spinal stenosis before he ever caught a pass for Ole Miss.

Peyton dominated Louisiana prep football, then opted to attend Tennessee rather than attempt to lengthen the family legacy at Mississippi. When Eli, five years younger, followed Peyton's footsteps in high school, he had to recognize it could be a thankless path. Yet he ran down it.

And then he chose to quarterback at Ole Miss, which hadn't experienced much to brag about since his father was there.

“You don't have to talk about how tough you are. You just show people how tough you are, and he did that,” Peyton said in a social media post Friday after Eli officially announced his retirement following a 16-year career with the Giants that included two Super Bowl wins.

He did it in college, helping make Rebels football relevant again. Then he emulated, by six years, Peyton being chosen first overall in the NFL draft. Eli stood firm, along with his family, by seeking a trade from San Diego, which made that pick, and he landed in the Big Apple.

He sat behind Kurt Warner for nine games of his rookie season, and even though New York had a 5-4 record, Manning was inserted as the starter. The Giants went nowhere, but Eli didn't flinch.

Soon, they were making the playoffs. In 2007, Manning and the Giants didn't back down in a season finale against New England that the Patriots won 38-35 to complete their perfect regular season. Manning and his teammates built up their confidence from that loss, then won three postseason road games to get to the Super Bowl. And a rematch with the unbeatable Patriots.

“Congratulations on your retirement, and a great career Eli!” Tom Brady tweeted Friday. “Not going to lie though, I wish you hadn’t won any Super Bowls.”

The youngest Manning would win two of those, the second in February 2012 in another win over the Patriots. From the David Tyree helmet catch in the 2008 Super Bowl to his missile to Mario Manningham down the sideline to catapult New York to the second upset of New England — not to mention his calm yet bold leadership against heavy odds — Manning had established himself as a Super Bowl great.

"Eli was a great competitor and champion. Playing his teams became some of our most challenging moments. We got our share, but they got the most important ones. It’s a credit to his leadership and determination and it was an honor to share the field with him,” Brady added.

Until he was farcically benched by then-coach Ben McAdoo for a late-season game in 2017, Manning had a string of 210 consecutive regular-season starts. The guy was indestructible at a position where nearly all of his peers (including Peyton) had significant injuries.

“Starting 200-plus consecutive games, answering the bell for his teammates, that's what toughness is,” Peyton wrote Friday. "So as his brother I have such admiration and love for him. But as a quarterback, I have incredible respect for his toughness, his accountability, his leadership skills."

Maybe that's what should be appreciated most. Even when he was cast aside — if only for a week — by McAdoo, then was replaced this season by first-round draft pick Daniel Jones, Manning never was disruptive. He was supportive, which also is a sign of strong leadership from a veteran athlete.

“For the last 16 years, Eli has meant so much to all of us here at the Giants and also to our fans,” Giants co-owner John Mara said. “We all know about the two Super Bowl MVP's and all of the great performances on the field. But just as important, was the way he conducted himself on and off the field as the consummate professional, always with dignity, always with class.”

Again, tons of credit to the kid whose older brother quarterback way back when used to torture him if Eli didn't know the name of every coach and quarterback on every SEC team.

Maybe Peyton will ask Eli to recite the names of every QB in the Hall of Fame someday. Maybe both Mannings will have their busts there, too.