Arbitrator rules against Jaguars in grievance with NFLPA 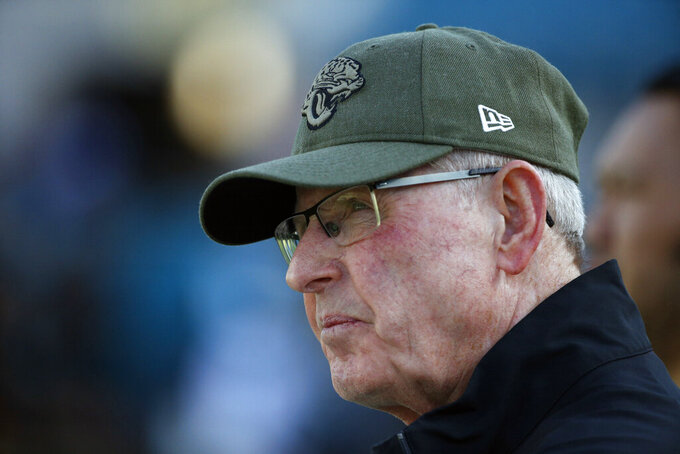 File-This photo taken Aug. 29, 2019, shows Tom Coughlin, executive vice president of football operations for the Jacksonville Jaguars watching players warm up before an NFL preseason football game in Jacksonville, Fla. Owner Shad Khan has a decision to make about the Jaguars (4-7), who are on the verge of missing the playoffs for the 11th time in the last 12 years. Khan hired Coughlin and head coach Doug Marrone at the same time in 2017, adding them to incumbent general manager Dave Caldwell and creating a triumvirate that worked well for two seasons. It now appears to be falling apart. Marrone took a shot at Coughlin on Tuesday, the first clear sign of internal strife. (AP Photo/Stephen B. Morton, File)

It was just one example of how Coughlin has run roughshod over players since his return to Jacksonville, according to the players' union.

The NFLPA filed a grievance on behalf of Fowler and other Jaguars players, challenging the club’s right to discipline players in those circumstances. An arbitrator recently ruled in favor of the NFLPA, negating the fines levied by Jacksonville in 2018.

The union responded by blistering the Jaguars in a statement.

“This is just one of the many grievances we had to file to protect our players from the Jaguars’ actions,” the NFLPA said. “The decision puts a stop to the blatant overreach by the Jaguars and emphasizes the voluntary nature of almost all football activities during the offseason.”

Fowler reacted to the decision on Twitter: “They literally hated me. I got it all back though! Thanks to the NFLPA.”

The arbitrator affirmed that the NFL's Collective Bargaining Agreement does not allow teams to require rehabilitation or medical appointments be held at team facilities during the offseason.

Coughlin and the Jaguars allegedly tried to require injured players to rehab at the facility. When players failed to attend the sessions, the club disciplined them.

Fowler, who was not named in the NFLPA's news release and was traded to the Los Angeles Rams in October 2018, was fined 25 times for missing those appointments.

“It should be noted that Jaguars players continue to be at odds with Jaguars management over their rights under the CBA far more than players on other clubs,” the NFLPA said. "In the last two years, more than 25% of the grievances filed by players in the entire league have been filed against the Jaguars.

“You as players may want to consider this when you have a chance to select your next club.”

It's the latest black eye for the 73-year-old Coughlin, the team's executive vice president of football operation.

The NFLPA investigated the Jaguars after Coughlin sent a letter to several players under contract in March 2017 and told them to return to Jacksonville for a physical examination.

Speaking at the team's annual state of the franchise address, Coughlin said “championship teams are dominated by selfless individuals who recognize that the welfare of the team must always be paramount to any other consideration.”

Ramsey and Smith were the only players who didn’t show up for the start of the team’s offseason program.

Neither remains with Jacksonville. Smith retired before training camp, and Ramsey forced a trade to the Rams in mid-October. Part of Ramsey's criticism involved the front office.