Are Chargers back on track? Thursday will provide clarity 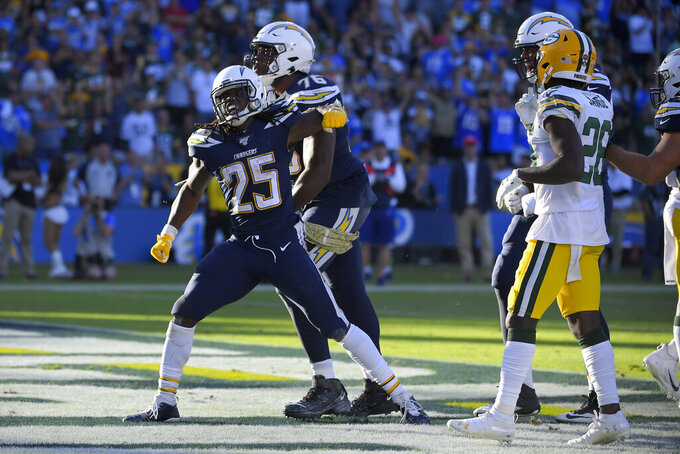 Los Angeles Chargers running back Melvin Gordon celebrates after scoring during the second half of an NFL football game against the Green Bay Packers Sunday, Nov. 3, 2019, in Carson, Calif. (AP Photo/Mark J. Terrill) 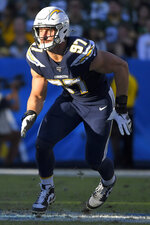 COSTA MESA, Calif. (AP) — Philip Rivers and the Los Angeles Chargers won't have to wait long to find out if they are finally back on track.

The Chargers had their best game of the season in Sunday's 26-11 victory over Green Bay, but they quickly had to turn their focus to Thursday night's game at Oakland. That begins a stretch of three straight division games for Los Angeles, which is 0-1 against AFC West rivals.

"We have to go find a way to get to where we want to get to. Finally get us to 5-5, with game against Kansas City, and Oakland's right there with us," Rivers said. "They're in the same boat. We have to find a way to stay right here in the mix."

The offense showed signs of getting back on track in Shane Steichen's first game as coordinator. Steichen, who was promoted after Ken Whisenhunt was fired last week, was able to keep the Chargers ahead of the chains; they had the ball for 36 minutes and averaged 6.5 yards per play.

Los Angeles didn't have a three-and-out on any of its nine possessions and only had to punt once.

Coach Anthony Lynn is hoping that the victory over the Packers can serve as the same catalyst that the Chargers' win over the Bills did two years ago. Los Angeles was 3-6 at the time, then went on to win six of its last seven.

Scoring touchdowns in the red zone continues to be a problem. The Chargers scored on all five trips against the Packers, but only two were touchdowns. They have a 36.8% TD efficiency rate inside the opponent's 20 over the past five weeks (7 for 19), which is seventh worst in the league. With two games against Kansas City remaining, the Chargers can't afford to squander scoring opportunities.

Gordon finally looked like a Pro Bowl running back. He had 80 yards on 20 carries after being held to 2.5 yards per carry in his first four games back following his two-month holdout. Most of Gordon's yards came in the second half, after the Chargers took a 9-0 halftime lead. They included a pair of 1-yard TDs and a 16-yard gain when he hurdled over Packers defensive back Chandon Sullivan.

Desmond King has struggled in the return game since running a punt back against Denver four weeks ago. King has only 8 yards on four punt returns since his TD and had a kick return on Sunday where he shouldn't have run it out of the end zone and taken the touchback.

159 — Rushing yards by the Chargers' offense against Green Bay, which was a season high. Los Angeles was held to 142 yards in its last four games combined and was the first team since 1947 to be unable to crack 40 rushing yards in four straight games.

Quickly prepare for the Raiders before getting the weekend off and heading to Colorado Springs, Colorado, on Nov. 9 to prepare for the Nov. 16 game against the Chiefs in Mexico City.