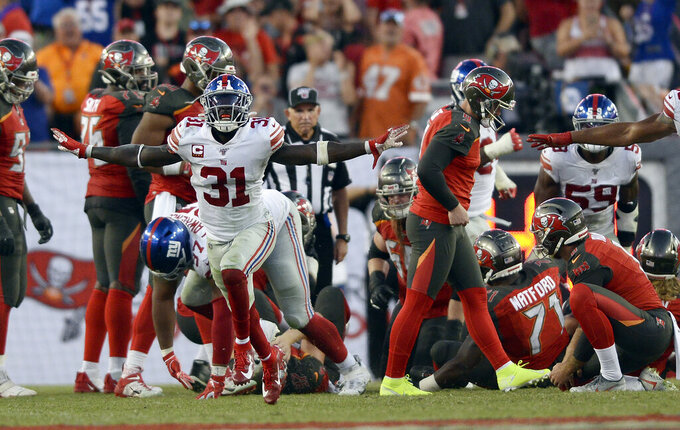 TAMPA, Fla. (AP) — A week after winning a close game on the road, the Tampa Bay Buccaneers found a way to lose one at home in excruciating fashion.

Things don't figure to get much easier the next two months for a team that's still learning what it takes to be successful.

Rookie kicker Matt Gay remained a hot topic on Monday, as did coach Bruce Arians' unconventional decision to use a delay of game penalty to move the ball 5 yards farther back before the sixth-round draft pick narrowly missed a potential game-winning 34-yard field goal in a 32-31 loss to the New York Giants.

Gay also missed an extra point and had another blocked.

Arians, in his first season at the helm of the Bucs, laughed when asked if he believes in the notion that the kicking game, which has been problematic in recent years, is cursed.

"No. It's just finding ways to win games," the 66-year-old coach said. "We found a way to win in Carolina, we didn't find a way against San Francisco (three weeks ago). New York, we found a way, (but) we just didn't get it done."

At 1-2, with both losses coming at home, the Bucs face an uphill battle to end the NFL's second-longest playoff drought. The team hasn't made the postseason since 2007 and is entering a daunting stretch in which they won't play at Raymond James Stadium again until Nov. 10.

On the front end of the six-week odyssey between true home games, Tampa Bay will travel to Los Angeles to face the defending NFC champion Rams, visit the New Orleans Saints and fly to England for a "home" date against the Panthers in London.

A bye week, followed by trips to Tennessee and Seattle complete a string of games that could make or break the season.

"We put ourselves in this hole, now we have to play great football," quarterback Jameis Winston said after Sunday's loss to the Daniel Jones-led Giants, who rallied from an 18-point halftime deficit in the rookie quarterback's first pro start.

"That's something we can learn from," Winston added. "We have to finish the game."

An improved running game has eased some of the burden on Winston to carry the offense. The Bucs still haven't had an individual 100-yard rushing performance, however they did gain 144 yards on 32 attempts against New York. Ronald Jones led the way with 80 yards on 14 carries, and Peyton Barber finished with 48 yards on 13 attempts.

The offense was just 4 of 14 on third downs against the Giants. Also, four trips inside the New York 10-yard line only produced one touchdown.

WR Mike Evans, OLB Shaquil Barrett. Winston's favorite target had eight receptions for 190 yards and three TDs. Evans also had a 44-yard reception to get the Bucs into field-goal range at the end. Gay, who rebounded from failing to convert two extra points in the opening quarter to make field goals of 47, 27, 52 and 23 yards, missed the potential game-winner wide right. Barrett, meanwhile, had four sacks. That came on the heels of three vs. Carolina. He has eight in three games.

Gay's strong leg made him attractive to the Bucs, whose recent kicking woes extend back to a poor decision to draft Roberto Aguayo in the second round in 2016. The rookie has been solid on long field-goal attempts but struggled on shorter kicks. At least for now, Arians is not second-guessing the decision to draft him.

Rookie ILB Devin White sat out Sunday's loss with a knee injury suffered against Carolina. The Bucs didn't report any significant injuries coming out of the game.

Seven. Calendar weeks that will have passed by the time the Bucs play their next true home game, Nov. 10 vs. Arizona.

Arians said moving forward, players need to correct mistakes that were costly against Giants and remember: "You learn a hell of a lot more by almost losing than you do by losing."