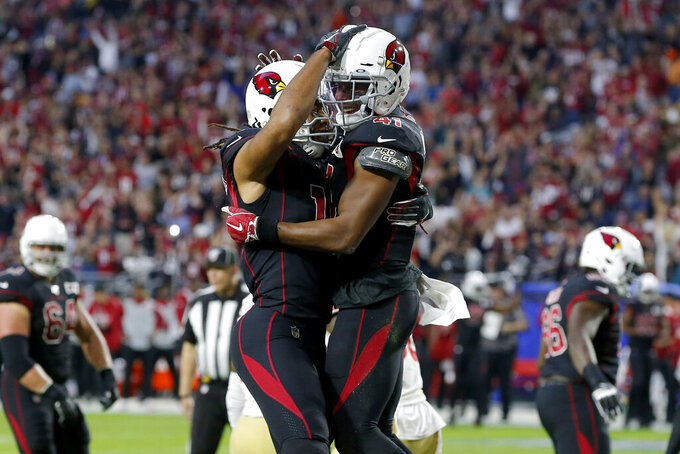 TEMPE, Ariz. (AP) — The script was familiar on Thursday night and so were the results. Faced with a tough task against a good team, the Arizona Cardinals fought hard, played entertaining football, enjoyed some good moments and showed a lot of promise.

The Cardinals also lost 28-25 to the undefeated San Francisco 49ers.

Considering Arizona (3-5-1) is just nine games into what everyone knew would be a substantial rebuilding process, the pedestrian record is understandable. Then again, the Cardinals have shown enough progress that the losses are becoming more frustrating.

For the most part, that's a good thing.

"There are no moral victories for us," Arizona receiver Larry Fitzgerald said. "We are a good football team."

Arizona took a big gamble during the offseason when it hired 40-year-old Kliff Kingsbury for his first NFL head coaching job and drafted quarterback Kyler Murray with the No. 1 overall pick.

Many wondered if Kingsbury would have the chops to be a good NFL coach. They also wondered if Murray — who is listed at 5-foot-10 — had the stature to become an elite NFL quarterback.

So far, it appears the Cardinals have made good choices.

Kingsbury and Murray have both shown promise. Kingsbury's version of the Air Raid offense has evolved through the season's first two months and he's proven capable of adapting to strengths of different personnel despite injuries along the offensive line and at running back.

Murray has thrown for 2,229 yards, nine touchdowns and four interceptions and run for 313 yards, showing the dual-threat ability that made him such an intriguing prospect.

Kingsbury wasn't ready to do a half-season analysis, but there's little doubt that the vibe around the franchise is still positive.

"That's a postseason-type breakdown for me," Kingsbury said on Friday. "We try to get better every week and try to do whatever we can to win that game that week."

RB Kenyan Drake had a stellar debut barely 72 hours after arriving in Arizona. The Cardinals traded for the 25-year-old on Monday, sending a conditional sixth-round pick in 2020 to Miami, and after one game, it appears to be an excellent pickup.

Drake ran for a team-high 110 yards and caught four passes for 52 yards.

"I feel like they came and got me for a reason, to come out here and make plays and help this team win games," Drake said. "We fell a little short in the win department, but I like the direction that this team is going."

Third-down defense. San Francisco's Jimmy Garoppolo had a big day against the Cardinals, throwing for 317 yards and four touchdowns. He was also very good on third down, completing two big passes on the final drive to keep Arizona's offense off the field.

San Francisco converted on third down 11 of 17 (65 percent) times on Thursday. It's been a trend that's frustrated the Cardinals all season.

"As a unit, we've got to find a way to be better against the pass," Kingsbury said.

WR Andy Isabella. The rookie has been buried on the depth chart for much of the season but broke out with a stunning 88-yard touchdown catch to pull the Cardinals within 28-25 in the fourth quarter on Thursday.

Coaches and teammates have raved about Isabella's speed since he arrived in Arizona and this was the first time it became evident in a game. The 5-foot-9,188-pound caught Murray's pass and then accelerated past the 49ers secondary for his first career touchdown.

CB Patrick Peterson. The nine-year veteran has been one of the NFL's elite defensive players over the past several years, but he had a tough game against the 49ers, getting beat on several throws.

Peterson missed the season's first six games after being suspended for violating the NFL's policy on performance enhancers.

Kingsbury was optimistic that running back David Johnson (ankle) will be able to return on Nov. 10 for a road game against Tampa Bay.

Kingsbury said it was unlikely that backup running back Chase Edmonds (hamstring) would return against the Buccaneers. Right tackle Justin Murray (knee) missed the 49ers game, who Kingsbury said was "day-to-day."

Arizona enters a strange portion of their schedule with just two games in November. Both are on the road against Tampa Bay and San Francisco.

The extra time to rest and focus could make the Cardinals a dangerous team by December.