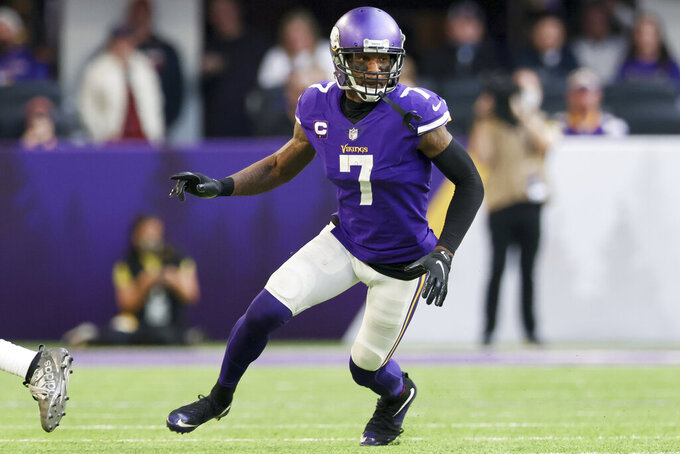 FILE -Minnesota Vikings cornerback Patrick Peterson (7) during the second half of an NFL football game against the Chicago Bears, Sunday, Jan. 9, 2022 in Minneapolis. The Minnesota Vikings have agreed to terms on a new contract with cornerback Patrick Peterson. This is another step toward stabilizing a problematic position. The 31-year-old Peterson had a solid first season with the Vikings in 2021. (AP Photo/Stacy Bengs, File)

After making major offseason changes to the front office and the coaching staff, they decided not to start over with the roster.

That's the ideal scenario for a true best-player-available approach. Come next weekend, though, it will be difficult for the new leadership of general manager Kwesi Adofo-Mensah and head coach Kevin O'Connell to ignore a particularly persistent need.

The proven cornerbacks that O'Connell's predecessor, Mike Zimmer, often said he could never have enough of remain in short supply after the end of Zimmer's eight-year run.

Bringing back Patrick Peterson for a second season in purple and a 12th year in the NFL was a vital offseason move. Signing former Green Bay Packers slot man Chandon Sullivan was another boost. Nate Hairston, another free agent pickup, added depth. Cameron Dantzler and Kris Boyd are back, the story of their careers not yet written.

Further upgrades in the draft, however, are a must for a team that ranked 28th and 25th the past two seasons in passing yards allowed.

“We wanted to add football players: guys with cover skill sets that can tackle, playing multiple spots,” O'Connell said. “Really, our defense is going to be about finding those pieces that fit.”

This draft is top-heavy with edge rushers, offensive tackles and wide receivers, which could help the Vikings. On the other hand, the consensus top two cornerback prospects — Cincinnati's Ahmad Gardner and LSU's Derek Stingley Jr. — will likely be gone by No. 12.

Washington's Trent McDuffie would make sense, even after a trade to move slightly down. Or if the Vikings are enticed by an edge rusher, Florida State's Jermaine Johnson II — a native of Eden Prairie, Minnesota — could well be available to the Vikings with their first pick on Thursday night.

They won't be focused on the offensive tackles, for once. After using the top of the past four drafts to enhance the offensive line, that unit is no longer the burning platform it once was. Tackles Brian O'Neill and Christian Darrisaw, guard Ezra Cleveland and center Garrett Bradbury were all taken in the first two rounds over the past four seasons.

As O'Connell held court last month during an NFC coaches interview session at the NFL meetings, he spoke confidently about having only one or two positions unsettled going into the summer.

“There's plenty of coaches in this room right now who are talking about two or three or four spots on the offensive line coming together,” he said.

The theme of the beginning of the Adofo-Mensah/O'Connell era has been collaboration, a professed value of theirs that was largely missing from the end of the tenure of their predecessors.

“It’s been a lot of fun. In a lot of ways, we’re just in there talking ball and what our systems require, then taking a look at these prospects and piecing it all together," O'Connell said of the pre-draft meetings with the coaching staff and scouting staff.

PUT A PIN IN IT

When the Vikings extended Kirk Cousins' contract by one year for another $35 million, they effectively took themselves out of the quarterback derby in this draft, which is decidedly light on projected franchise-changers. With 2021 third-round pick Kellen Mond still in the fold and Sean Mannion retained as the primary backup, taking a developmental quarterback on the third day of the draft appears to be unlikely, too.

Wide receiver Justin Jefferson was asked recently whether he follows the draft and made it clear he won't be parked in front of the TV next weekend.

“Just like in my case, it doesn’t really matter where you get picked up at. It all depends on what you do when you get there,” Jefferson said. “The draft, to be honest, I don’t really like to watch it. It’s long. I don’t like it.”

The Vikings have taken cornerbacks with four of their past 12 first-round selections: Xavier Rhodes (2013), Trae Waynes (2015), Mike Hughes (2018) and Jeff Gladney (2020). The only other position accounting for multiple first-rounders since 2013 is wide receivers, with three.

The Vikings are scheduled to pick 46th and 77th overall in the second and third rounds, respectively, on Friday night. For Saturday afternoon, they have one pick in the fifth round (156), three picks in the sixth round (184, 191, 192) and one pick in the seventh round (250).

Their fourth-rounder went to the New York Jets for tight end Chris Herndon, a trade last year that also netted them a sixth-rounder. Herndon caught four passes with one touchdown last season and played about 16% of the snaps on offense. The other additional sixth-round pick was acquired last year from the Kansas City Chiefs for Hughes.