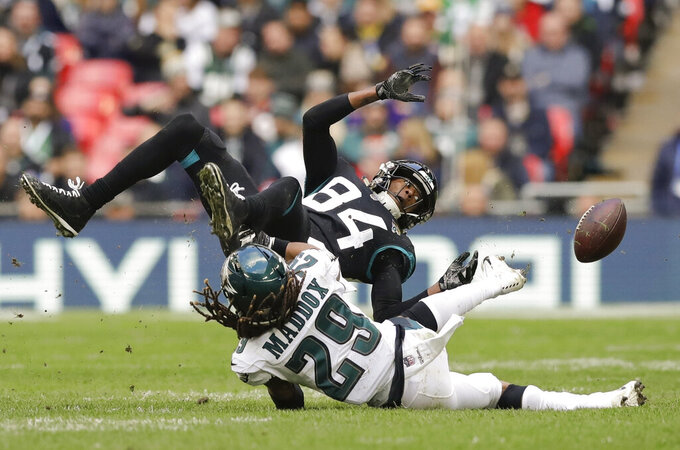 FILE - In this Oct. 28, 2018, file photo, Jacksonville Jaguars wide receiver Keelan Cole (84) is tackled by Philadelphia Eagles free safety Avonte Maddox (29) during the first half of an NFL football game, at Wembley stadium in London. When injuries ravaged the secondary, the Philadelphia Eagles turned to inexperienced guys and castoffs. The no-names are making themselves known. (AP Photo/Matt Dunham, File)

PHILADELPHIA (AP) — When injuries ravaged the secondary, the Philadelphia Eagles turned to inexperienced guys and castoffs.

The no-names are making themselves known.

Cre'von LeBlanc, Tre Sullivan, Rasul Douglas and Avonte Maddox have stepped up in a big way down the stretch, helping the Eagles (10-7) win four straight games and advance to an NFC divisional playoff at New Orleans (13-3) on Sunday.

LeBlanc had only joined the team 13 days earlier when the Eagles were destroyed by the Saints, 48-7, on Nov. 18. The third-year pro saw his first action with his new team at cornerback in that game and was part of a defense that Drew Brees tore apart.

"Back then I was just coming in trying to figure things out," said LeBlanc, who began the season in Detroit. "Now I'm more comfortable, I'm more at ease and I know the game plan."

LeBlanc has become a key player, filling in for Sidney Jones at nickel cornerback. He shut down Chicago's leading receiver, running back Tarik Cohen, in Philadelphia's 16-15 win over the Bears in the wild-card round. Cohen had only three catches for 27 yards.

"I don't know where we'd be without Cre'Von," defensive coordinator Jim Schwartz said. "I never heard of Cre'Von LeBlanc before (the scouting staff) said they were thinking about claiming this guy. ... We owe a lot of our season to that."

LeBlanc, who was released by the Patriots, Bears and Lions in his first three seasons, deflected the credit.

"I appreciate everything Jim said about me. It's a big honor. I'm thankful for it but I wouldn't say I saved the season," LeBlanc said. "It was a team thing. We did it collectively. We're on a roll right now and we believe in each other."

The Eagles already were missing starting cornerbacks Ronald Darby and Jalen Mills and starting safety Rodney McLeod going into the first meeting against New Orleans. Maddox and Jones were injured in the game and things got ugly. Brees threw for 363 yards and four touchdowns and the offense racked up 546 yards.

"Night and day," LeBlanc said about the difference between then and now. "We had a lot of new guys out there trying to figure things out on the fly, on the run. All the hard work we put in week in and week out and getting together each day to communicate and study film helped us build."

Douglas, a third-round pick in 2017, was buried on the depth chart before all the injuries forced him into the starting lineup. He led the team with eight tackles against the Bears and coaches have praised his physical style.

"Guys don't block corners. They leave us to tackle so I try to get the guy on the ground," Douglas said.

Sullivan began the season on the roster, got released after a critical mistake on special teams in Week 1, returned to the practice squad and now has been seeing plenty of action at safety. He dropped an interception in the end zone last week, but has been solid overall.

Maddox, a rookie fourth-round pick, has been one of the biggest surprises this season. He's played safety, nickel cornerback and outside cornerback.

"I've said before I don't know where we'd be without Avonte," Schwartz said.

The anchor in the secondary is two-time Pro Bowl safety Malcolm Jenkins. While everyone around him got hurt, Jenkins has played every snap. Jenkins was a rookie on the Saints when they won the Super Bowl nine years ago. He left in free agency after five seasons.

"He was probably one of the most important parts to our Super Bowl run," Saints coach Sean Payton said. "Letting him out of the building certainly wasn't a smart decision."