Bad Texans get mad as losing streak extends to 4 games 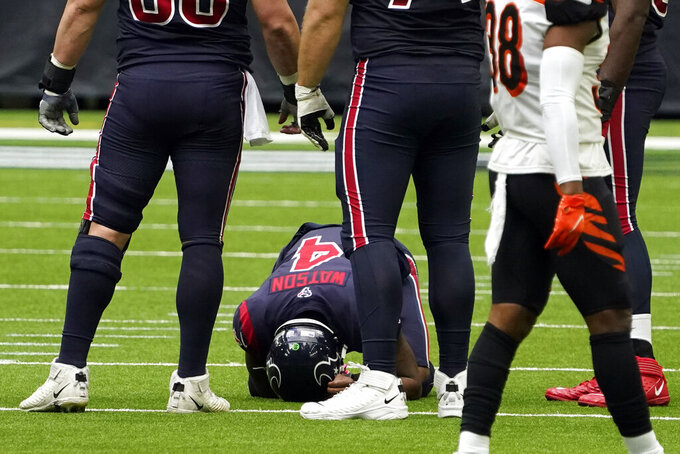 Houston Texans quarterback Deshaun Watson (4) is slow to get up after fumbling the football while being hit by Cincinnati Bengals' Sam Hubbard during the second half of an NFL football game Sunday, Dec. 27, 2020, in Houston. The Bengals won 37-31. (AP Photo/Sam Craft)

HOUSTON (AP) — The Houston Texans have been bad all season.

A 37-31 loss to the Bengals on Sunday gave them their second four-game skid of the season and pushed star J.J. Watt into a postgame tirade about effort and professionalism.

Interim coach Romeo Crennel said he empathizes with Watt and he's frustrated, too. But he thinks for the most part his team is doing the best it can under difficult circumstances.

Long out of the playoff hunt, the Texans (4-11) have little to play for other than pride this Sunday when they wrap up the season against the visiting Titans (10-5), who lead the AFC South.

“You don’t play this game to lose like we’ve been losing,” receiver Brandin Cooks said. “Man, it’s horrible, but I think we’ve got guys that’s going to continue to fight, and that’s all we genuinely can do and control the things that we can control and show up and try to get better and finish on a positive note.”

Houston started the season 0-4, which led to the firing of coach and general manager Bill O'Brien. The team then won four of seven under Crennel — twice against the league-worst Jaguars — before the current four-game skid.

Sunday was the third time in the past four games the Texans have had a chance to win or tie a game late but lost a fumble instead.

They trailed Cincinnati by three with about two minutes left when Deshaun Watson was sacked by Sam Hubbard, who forced a fumble that Margus Hunt recovered, leading to a Bengals field goal.

Watson’s late fumble was an unfortunate end to another strong game. He threw for 324 yards and three touchdowns, his ninth 300-yard game this season. The fourth-year player has thrown 30 touchdown passes to set a single-season franchise record and his 4,458 yards passing are a career high, rank second in the NFL and are the second most in team history.

Watson was shaken up on that sack late in Sunday’s loss, but returned in the final seconds and said he was fine after the game. Crennel said he wouldn’t consider sitting Watson this week to avoid an injury to his star quarterback.

The Bengals rushed for 169 yards on Sunday in the latest terrible performance by Houston’s run defense. The Texans rank 31st in the league, allowing 151.7 yards rushing per game, and Sunday was the eighth time they’ve allowed more than 160 yards.

David Johnson had a second straight big game on Sunday when he rushed for a season-high 128 yards with a rushing touchdown and a TD catch. A week earlier, he set career highs with 11 receptions for 106 yards in a loss to the Colts. His recent strong play is a welcome development for the Texans after he struggled for much of the year. Houston acquired Johnson in the offseason in the trade that sent DeAndre Hopkins to Arizona, a baffling personnel move that hastened O'Brien's departure.

Chad Hansen had one catch for 8 yards on Sunday after piling up 212 yards receiving combined in his past three games and scoring his first career touchdown last week.

RG Brent Qvale sustained a concussion against the Bengals and will likely miss the season finale. ... LT Laremy Tunsil injured his foot in the second quarter and Crennel said he isn’t sure if he will return this week.

540 — Yards Houston allowed on Sunday, the second most the team has given up all season behind the 607 Tennessee had in a Week 6 victory.

Tennessee will have plenty to play for on Sunday, when a win will give it the AFC South title. The Titans beat the Texans 42-36 in overtime in Week 6 behind a 212-yard rushing performance from Derrick Henry. For the Texans to have any chance for the upset, they’ll have to find a way to slow down Henry, who ran for 211 yards against them in Week 17 last season, and who needs 223 yards to reach 2,000 this season.

“If we can win the game, at least we can go out this year with a win and not feel as bad as we presently do,” Crennel said.