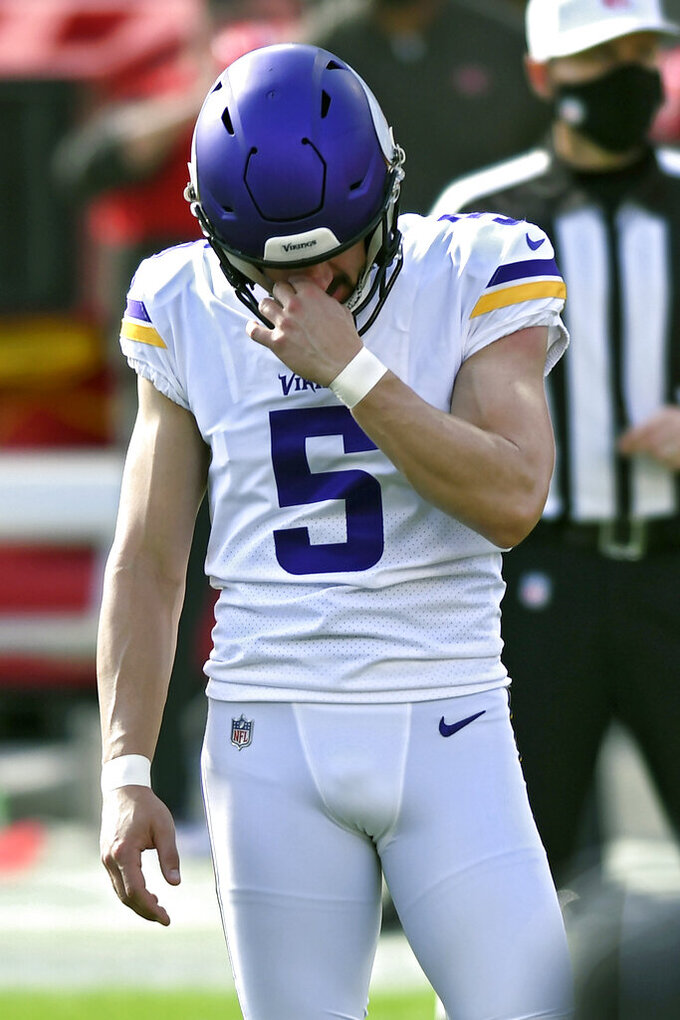 Minnesota Vikings' Dan Bailey (5) reacts after missing a field goal against the Tampa Bay Buccaneers during the first half of an NFL football game Sunday, Dec. 13, 2020, in Tampa, Fla. (AP Photo/Jason Behnken)

TAMPA, Fla. (AP) — Dan Bailey’s job with the Minnesota Vikings may be in jeopardy after the kicker’s poor performance in a loss to the Tampa Bay Buccaneers.

The 10th-year pro, who nearly cost the team a game the previous week, missed an extra point and three field goals that could have made a difference in Sunday’s 26-14 setback that hurt the Vikings in the crowded NFC playoff race.

Bailey missed an extra point to the left after Minnesota scored a touchdown in the first quarter. He missed all three field goals he attempted, from 36, 54, and 46 yards, to the right.

“I don’t know, he kicked good during the week this week,” Zimmer said. “So we’ll just have to make a decision and go with it. We can’t throw away 10 points and things like that. At this point in time you’re not really worried about feelings anymore.”

Bailey missed two extra points and a potential winning field goal before delivering a winning kick to beat Jacksonville in overtime the previous week. Before that game, Bailey was 10 of 12 on field goals and had made all 26 of his extra point attempts this season.

Zimmer said Bailey’s misses Sunday took a toll on a team that had won five of six to climb back into playoff contention after a 1-5 start.

“It let a little bit of air out,” Zimmer said. “You anticipate guys making those kicks. I am really disappointed. I have a lot of faith and confidence in him, but the last two weeks haven’t been good. I love the kid … but I don’t know.”

Zimmer, however, stopped short of placing all the blame on Bailey. The coach said the Vikings made several mistakes that led to their defeat.

“We gave up a 50-yard throw because a couple of guys weren’t in the right place, and that can’t happen either,” Zimmer said, “It’s not all on Dan Bailey. If you want me to fire guys for making a mistake here, a mistake there, then we wouldn’t have many players.”

Several other teammates came to Bailey’s defense. Quarterback Kirk Cousins said he had to assume some of the blame for Sunday’s loss by taking several sacks that either made for longer field goals or took the Vikings out of field-goal range altogether.

“We win as a team, we lose as a team. This league will test you no matter what position you play. It was one day. Not one season or a career. You don’t ever want to make a bigger deal out of one day than it needs to be.”

Defensive back Jeff Gladney believes that Bailey will bounce back if he’s given another chance.

“Dan is a good player, he’s going to make it,” Gladney said. “He’s going to push through. He’ll make four next week.”