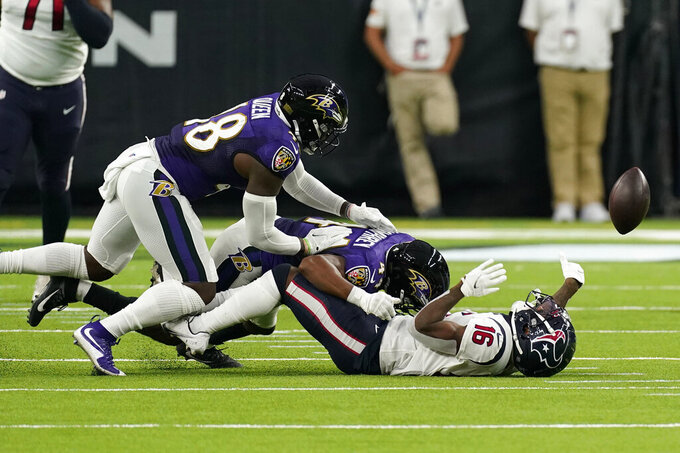 Whether it's knocking down a pass, punching the ball loose or going the other way with an interception, Baltimore Ravens All-Pro cornerback Marlon Humphrey has a knack for making game-changing plays.

It's a trait that might prove to be pivotal in Monday night’s matchup against the defending Super Bowl champion Kansas City Chiefs and standout quarterback Patrick Mahomes.

Last Sunday in Houston, Humphrey whipped his right arm around wide receiver Keke Coutee and stripped the ball. Baltimore linebacker L.J. Fort picked up the fumble and streaked 22 yards for a second-quarter score to put the Ravens up 20-7 in a game they would win 33-16 for their 14th consecutive regular-season victory.

It was a play that has become commonplace for Humphrey, who last year forced Pittsburgh receiver JuJu Smith-Schuster to fumble in overtime. Although left on his back while making the play, Humphrey got up and sprinted 10 yards to pick up the loose ball and set up the game-winning field goal.

That was one sampling of a season in which Humphrey had 65 tackles, three interceptions, three fumble recoveries (scoring on two of them) and two forced fumbles. It's more of the same in 2020: The fourth-year star is the only AFC player thus far with an interception and forced fumble.

“It’s just Marlon doing Marlon things," Ravens offensive tackle Ronnie Stanley said Wednesday. “I would say that’s just how I expect him to play. He’s all over the field causing havoc. He’s always trying to knock the football out."

With Humphrey leading the way, the Ravens (2-0) have forced a turnovers in 15 straight games and lead the NFL during this young season with five takeaways. In addition, Baltimore scored six defensive touchdowns last year (two by Humphrey) and started the 2020 ledger with Fort's game-changing TD.

“Two of our goals are, not only get turnovers but score with them as well," Humphrey said.

After a breakthrough season in which Humphrey made All-Pro, earned his first Pro Bowl berth and helped the Ravens to a 14-2 record, Humphrey lamented after a playoff loss to Tennessee that his year fell short of expectations.

“I was on the field during the Super Bowl just walking around, watching the other teams warm up,” Humphrey said. “The energy I felt down there in Miami, it really just triggered my whole offseason into just thinking, ‘Man, the only thing I really want is a Super Bowl.’”

So he worked hard during the offseason, climbing a rock pile in Alabama with his brothers and running with his sister, who's on the track team at LSU.

During training camp, coach John Harbaugh said, “Marlon is all over the field. He’s physical. He’s running to the ball. Eyes are where they’re supposed to be in coverage. I would say he’s taking it up another notch, which is really impressive, because some guys aren’t mature enough to handle the attention.”

Humphrey attributes a portion of his success to fellow cornerback Marcus Peters, who was also selected to the Pro Bowl last season. Obtained last October in a trade with the Rams, Peters scored twice on interception returns for Baltimore and has seven touchdowns over his five-year career.

“When it comes to getting the ball, I’ve got the best guy at that in Marcus Peters," Humphrey said. “Anytime I need a tip or a hint, I can go to him. He’s always there telling me something."

Humphrey has proven to be quite a student, and he's surely going to have to be at the top of his game when the Ravens take on Mahomes and the Chiefs (2-0).

“He's got all these tools and has all this talent around him," Humphrey said of Mahomes, the 2018 NFL MVP and reigning Super Bowl MVP. “As good as he is in the pocket, he's just as good if not better outside the pocket. Preparing for him is really tough. He's never out of the game."