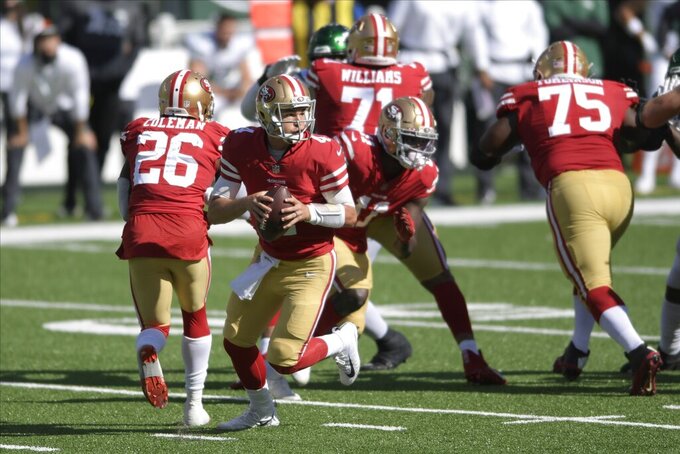 Jimmy Garoppolo missed practiced with a sprained ankle and is unlikely to return this week, setting the stage for backup Nick Mullens to possibly make his first start at quarterback for the San Francisco 49ers in nearly 21 months.

Garoppolo was one of several 49ers who went down with injuries in last week’s 31-13 win over the New York Jets. He still holds out hope to return this week but coach Kyle Shanahan said Wednesday he’d be surprised if that happened and expects Mullens to start.

“I know our players believe in him and he’ll be fine,” Shanahan said from the team’s base for the week at The Greenbrier resort in West Virginia.

The 49ers will be missing many key players for Sunday’s game against the New York Giants. Defensive linemen Nick Bosa and Solomon Thomas were placed on injured reserve after tearing their ACLs last week and will miss the rest of the season.

Running backs Raheem Mostert and Tevin Coleman also sprained their knees in that game, with Coleman expected to miss about four weeks and Mostert hopefully back sooner than that.

The Niners are already without star cornerback Richard Sherman (calf), No. 1 receiver Deebo Samuel (foot) and starting center Weston Richburg (knee) among others.

“We had a lot of guys miss a lot of time last year and for the most part, even though we’d step back in places, other places stepped it up,” Shanahan said. “I thought we really handled injuries very well last year. It was tough when you lose a couple of really good players for the year, like Nick and Solly, but all those other guys, you didn’t lose them for the year. We’ve got to see how long we’ve got to weather the storm without them, but we can do that.”

The injuries last week happened on the same MetLife turf the Niners will play on this week against the Giants. Players complained about the surface and have expressed anxiety about returning to it this week despite assurances from the league that it is safe.

“If you’re playing, you better be confident and full speed,” Shanahan said. “People that know what they’re talking about, the NFL and NFLPA’s having people look at it right now. So, we’ll go with that. If they don’t find anything, you go out there and play.”

The 49ers did get some good news on the injury front with All-Pro tight end George Kittle returning to practice on a limited basis after missing last week’s game with a knee injury and cornerback Jason Verrett being a full participant after sitting out the first two games with an injured hamstring.

The Niners also officially signed defensive lineman Ezekiel Ansah to a one-year deal and promoted defensive lineman Dion Jordan from the practice squad to fill in for the losses of Bosa, Thomas and edge rusher Dee Ford, who is dealing with a back injury and has no timetable for his return.

“I think a lot of talk outside of the building is a lot about what we’ve lost but not a lot about the depth and the people we have here on this defense in this building,” linebacker Fred Warner said. “I think we’re all very excited for this week to go against the Giants and go out and prove that we’re the defense that we say we are and that we show on tape.”

On offense, it will be up to Mullens and a revamped backfield to make up for the losses. Mullens started the final eight games in 2018, averaging 284.6 yards passing in those games with a 90.8 rating.

Jerick McKinnon should get a heavy load at running back, along with Jeff Wilson Jr. and JaMycal Hasty, who is expected to get called up from the practice squad for the game.

After missing the past two seasons with knee injuries, McKinnon has six carries for 101 yards and a touchdown, along with catches for 20 yards and a score in two games so far this season.

“Jet works like a machine,” said left tackle Trent Williams, who worked out with McKinnon during the offseason. “That’s why I couldn’t imagine him being on the field and not being a breakout player, not being that guy who can carry the load as an every down back. I think he’s showing us that, his first time really playing in two years.”

NOTES: Shanahan said he’s disappointed about a $100,000 fine from the league for not wearing his mask during the game last week and hopes it doesn’t take away from the work the organization has done dealing with the coronavirus. “I got the message and I will do better.” ... The Niners signed DL Alex Barrett and RB Austin Walter to the practice squad.