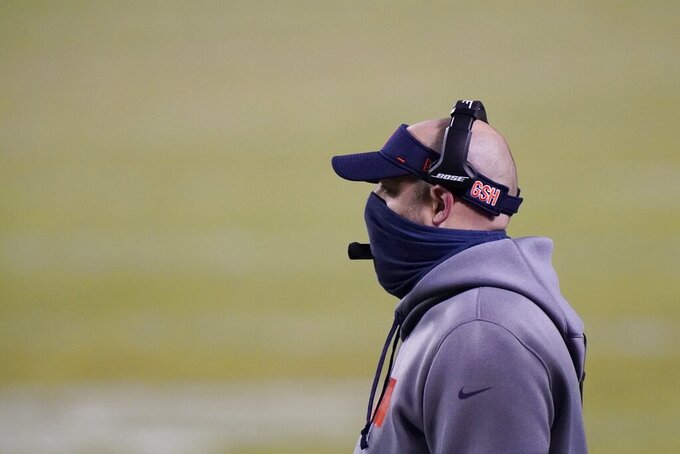 CHICAGO (AP) — Following a strange roller coaster of a season, the Chicago Bears are back in the playoffs.

Who shows up next weekend in New Orleans remains to be seen.

Moments after Arizona handed Chicago a postseason spot with an 18-7 loss to the Los Angeles Rams, the biggest question for the Bears became the status of linebacker Roquan Smith and wide receiver Darnell Mooney after they left Sunday's 35-16 loss to Green Bay with injuries.

Smith, Chicago's leading tackler, departed late in the first quarter with an elbow injury. Mooney, who set career highs with 11 receptions for 93 yards, hurt an ankle early in the fourth.

Coach Matt Nagy said he should know more about Smith's injury in the next day or two.

Nagy did not provide an update on Mooney, a fifth-round pick in last year's draft who had 61 receptions for 631 yards and four touchdowns during his rookie season. With Green Bay focusing on Allen Robinson, Mooney found room to roam in the Packers' secondary before he got hurt.

“Mooney took advantage of his opportunities and made some big plays for us,” quarterback Mitchell Trubisky said.

Health might be the biggest issue for the Bears (8-8) as they prepare to face Drew Brees and the NFC South champion Saints (12-4) next Sunday in the wild-card round. Chicago lost 26-23 to New Orleans in overtime at Soldier Field on Nov. 1.

A playoff matchup with Brees and company is a daunting proposition in any circumstances, but a short-handed roster makes it all the more difficult. Defensive backs Buster Skrine, rookie Jaylon Johnson and Deon Bush missed the loss to Green Bay (13-3) because of injuries, and Aaron Rodgers passed for 240 yards and four touchdowns for the NFC North champions.

“Anything can happen once you get into the playoffs,” Nagy said. “Anything, especially this year, too.”

Chicago put itself in a strong position to make the playoffs when it got off to a 5-1 start. The Bears then dropped six in a row, increasing the heat on Nagy and general manager Ryan Pace. The fate of the duo has yet to be announced, but a 3-1 finish to the regular season and a second playoff appearance in three years might be enough to keep them in place for now.

The Bears stayed with the Packers into the fourth quarter before falling apart down the stretch. Down 21-16 and driving with about 12 minutes left, running back David Montgomery was stopped for no gain and Trubisky threw incomplete on a rollout on fourth-and-1 at the Green Bay 25.

Rodgers then drove the Packers down the field, and Aaron Jones finished a 12-play, 76-yard drive with a 4-yard touchdown run. After a Trubisky interception, Rodgers put it away with a 6-yard TD pass to Davante Adams with 2:56 remaining.

Green Bay turned each of its four trips to the red zone into touchdowns, while Chicago went 1 for 5 in those situations.

“You can’t play the Green Bay Packers and Aaron Rodgers and kick field goals,” Nagy said. “We have to get touchdowns. There’s no other way.”