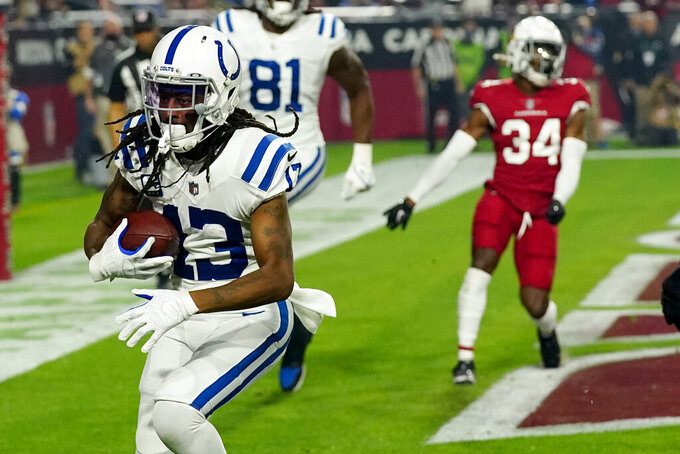 GLENDALE, Ariz. (AP) — The Indianapolis Colts have beaten some teams with Jonathan Taylor's legs, some with Carson Wentz's arm and a few with stellar defense. They added another formula for a victory Saturday night: sheer grit.

“We've got a ton of ways to beat you,” receiver T.Y. Hilton said. “You just pick the way you want to get beat."

Wentz threw two touchdown passes, Taylor ran for 108 yards and the banged-up Colts continued their late-season surge with a hard-earned 22-16 win over the fading Arizona Cardinals on Saturday night.

The Colts (9-6) have won three straight and six of seven. They got the road win despite missing 2020 All-Pro linebacker Darius Leonard — who was put on the reserve/COVID-19 list earlier Saturday — and four starting offensive linemen.

“This is one of the best team wins I’ve ever been a part of, considering everything,” Colts coach Frank Reich said. “I’m sure there are some other good ones, but this is up there.”

Wentz made the game's biggest play midway through the fourth quarter, when he bounced around in the pocket for a few seconds before hitting Dezmon Patmon for a 14-yard touchdown on a perfectly placed ball in the back of the end zone. That gave the Colts a 22-13 lead.

The Cardinals (10-5) failed to clinch a playoff spot for a third straight week and are 3-5 since starting the season 7-0. Kyler Murray threw for 245 yards and a touchdown while also running for 74 yards.

“We continue to find ways to lose, critical situations, penalties, things of that nature,” Cardinals coach Kliff Kingsbury said. “We’ve got to get it turned around somewhere.”

The Cardinals grabbed a 13-12 lead early in the third quarter when Murray hit Antoine Wesley for a 24-yard touchdown, which was the first of Wesley's NFL career.

Suddenly, the onus was on the Colts' patchwork offense to produce. That wasn't easy for a unit that came into the game missing three starting offensive lineman. By the end of the first half, left tackle Eric Fisher and tight end Jack Doyle were also on the sideline with injuries.

The Colts managed to cobble together a drive late in the third quarter capped by a 37-yard field goal for a 15-13 lead. Indianapolis caught a break a few minutes later in the fourth quarter when Prater's 41-yard field goal bounced off the right upright.

That set up a seven-play, 69-yard Indianapolis drive that ended with Wentz — who completed 18 of 28 passes for 225 yards — connecting with Patmon.

“I saw him at the last second, screaming at the back of the end zone,” Wentz said. “I gave him a chance and he made a great play.”

The Colts got off to a great start when Taylor broke free for a 43-yard run on the team's first offensive play. The 226-pound back sliced through the middle of the line before bouncing to the outside and rumbling down the right sideline. Five plays later, Wentz had plenty of time to find T.Y. Hilton for a 1-yard touchdown and a 7-0 lead.

Taylor came into the game as the NFL's leading rusher by a wide margin with 1,518 yards on the ground. That's more than 400 yards ahead of Cincinnati's Joe Mixon, who sits at No. 2.

The Cardinals bounced back quickly after the Colts scored. Murray faked a handoff to Jonathan Ward, made a nice cut and ran 57 yards before being knocked down at the Indy 2. Two plays later, Chase Edmonds burst through the line for a 2-yard touchdown. Prater missed the extra point and the Colts kept a 7-6 lead.

The Colts added a safety late in the second quarter when Murray couldn't handle a low snap. The quarterback picked up the ball and flung it out of the end zone and was called for intentional grounding in the end zone, which is an automatic safety.

It was not a crisp performance for the Cardinals, especially in the first half. Prater missed the 51-yard field goal and also botched an extra point, the offense had a turnover on downs and gave up a safety. Arizona players were called for seven penalties before the break.

Cardinals: Running back James Conner and rookie receiver Rondale Moore were among the team's inactives. Conner (heel) was selected to the Pro Bowl earlier this week after running for 700 yards and 14 touchdowns. Moore (ankle) has caught 54 passes this season. CB Marco Wilson (shoulder) was hurt near the end of the first half and didn't return.

Colts: host the Raiders on Jan. 2.

Cardinals: travel to the Cowboys on Jan. 2.