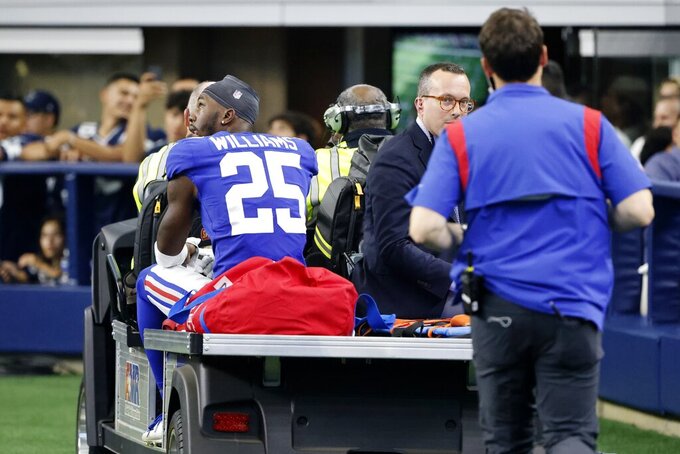 New York Giants cornerback Rodarius Williams (25) is carted off the field after suffering an unknown in injury in the second half of an NFL football game against the Dallas Cowboys in Arlington, Texas, Sunday, Oct. 10, 2021. (AP Photo/Michael Ainsworth)

EAST RUTHERFORD, N.J. (AP) — The New York Giants are battling the deadly B's five games into the season: They're bad and they're banged up.

The Giants (1-4) took their second-worst loss in the Joe Judge tenure dropping a 44-20 decision in Dallas to the NFC East-leading Cowboys on Sunday. New York was beaten in every phase of the game by Dak Prescott and company. The injuries only made it worse.

Running back Saquon Barkley sprained his left ankle early, stepping on the foot of Dallas defensive back Jourdan Lewis. Quarterback Daniel Jones sustained a concussion in a goal-line collision late in the first half. Receiver Kenny Golladay left at halftime with a knee injury, and backup cornerback Rodarius Williams tore an ACL in the second half.

Combine those with major injuries earlier this season to inside linebacker Blake Martinez, center Nick Gates and left guard Shane Lemieux, and this is a team in dire circumstances just more than a month into the schedule.

“We will put our best foot forward and it is just business as usual,” he said. "You have to come back every day, keep fighting, keep working and stick together.”

Despite losing Jones to a helmet-to-helmet hit on his run, the passing game was effective. Glennon took over and was 16 of 25 for 196 yards and a touchdown to rookie Kadarius Toney. New York scored 10 points in the second half and had another drive end at the Dallas 2 because the Giants were stopped on fourth down needing a TD. New York finished with 294 yards passing, with Toney carrying the load.

Dallas gained 515 total yards, including 201 on the ground. The Cowboys scored on seven of 10 offensive possessions. The 515 yards made for the highest total allowed by the Giants since New Orleans gained 608 yards in a 52-49 win in 2015.

The front seven didn't stop the run and provided very little pressure in passing situations. The Cowboys did whatever they wanted.

Toney showed why he was drafted in the first round. The Florida product had 10 catches for 189 yards, breaking Odell Beckham Jr.'s team record for receiving yards by a rookie in a game. Beckham had 185 yards against Philadelphia in 2014. It was the highest total by a Giants receiver since Beckham had 222 yards against Baltimore in 2016.

What the numbers don't show was how hard Toney played despite tweaking an ankle. While he was ejected late for throwing a punch, Giants fans had to love his attitude and, uh, fight.

Defensive lineman Leonard Williams got a three-year, $63 million contract after making a career-best 11 1/2 sacks last season. Not only did he chase quarterbacks, he seemed to be a force on every play.

Williams has 24 total tackles and 1 1/2 sacks in the five games this season, but something seems to be missing. He had six tackles, a half-sack and a quarterback hit against the Cowboys on Sunday, but he seemed invisible at times. He also is facing more combination blocks and double-team efforts.

Jones, Barkley, Golladay and Williams are just the latest injuries. Starting LT Andrew Thomas did not play because of a foot injury. WRs Sterling Shepard and Darius Slayton have missed the past two games with hamstring injuries, along with LG Ben Bredeson (hand). S Jabrill Peppers was out Sunday with a hamstring issue. The Giants hope to have Shepard and Slayton back this week.

Judge said Jones was in the concussion protocol Monday. He added Golladay and Barkley seemingly have avoided major injuries. The news was not so good for Rodarius Williams. He is out for the season with an ACL injury.

5 — The defense has given up a touchdown in the final two minutes of the first half in every game this season. The Giants also have lost games on the final play against Washington and Atlanta. The two-minute defense needs to be revamped quickly.

After two road games, the Giants return home to face the Rams (4-1) on Sunday. Their only loss was to the undefeated Arizona Cardinals.