With Barkley out with ankle injury, Gallman gets his shot 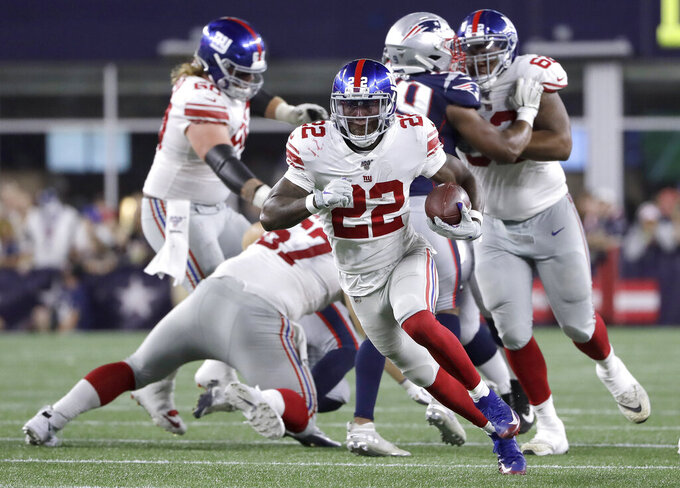 FILE - In this Aug. 29, 2019, file photo, New York Giants running back Wayne Gallman (22) carries the ball against the New England Patriots during the second half of a preseason NFL football game in Foxborough, Mass. With Saquon Barkley out with a sprained right ankle, Gallman is going to start Sunday against the Washington Redskins at MetLife Stadium. (AP Photo/Steven Senne, File) 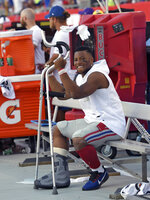 EAST RUTHERFORD, N.J. (AP) — When the New York Giants opened their locker room this week, Wayne Gallman was in as much demand rookie quarterback Daniel Jones.

It might seem unusual for a running back who has scored just twice on the ground in his more than two years in the NFL. But there was a reason.

The Giants (1-2) are without Saquon Barkley entering Sunday's game at MetLife Stadium against the Washington Redskins (0-3).

Gallman is tasked with filling in for the 2018 NFL Offensive Rookie of the Year for the foreseeable future. Barkley is sidelined indefinitely with a high sprain to his right ankle. It's left New York without a home-run hitter on offense.

Gallman understands this is his chance.

"I haven't had this opportunity since I have been in the league," he said Friday. "I am ready to prove myself and go out there and have some fun. The ultimate focus is getting the team a win. I hope to get some yards and stuff, but right now it's to get the W first."

A fourth-round draft pick out of Clemson in 2017, Gallman has had two starts with the Giants. His best game was 15 carries for 89 yards against the Redskins late in his rookie season. He has caught 51 passes in his career for 306 yards and a touchdown.

The one thing Barkley has done in his short career is make the big play. The second pick overall in the draft, he had seven rushes for 40-plus yards and six for 50 yards or more. Against the Eagles in October, the Penn State product had a catch and a run for at least 50 yards.

"We have other ways we feel like we can create chunk plays," offensive coordinator Mike Shula said. "They might not be 50-yard plays, but if we can get those chunk plays anywhere from, as a run, over 12 yards, we kind of look for those, (and) in the passing game over 18. Those are momentum-changing plays and field position-changing plays which put you in a positive situation.

Gallman is approaching this game the same way he would as if Barkley would be starting. He is watching videotapes of the Redskins' defensive fronts, how the linebackers play the defense, the blitzes and looks Washington employs and assimilating all the information provided by the Giants coaches. That's besides focusing on his runs and how New York intends to block things.

Gallman has a history of producing. He rushed for 1,527 yards in 2015 with the Tigers and 3,429 yards in three seasons in college. He isn't worried about being compared to Barkley.

"I'm me and you guys are going to see that," said Gallman, who will be backed up by veteran Eli Penny and rookie Jon Hilliman.