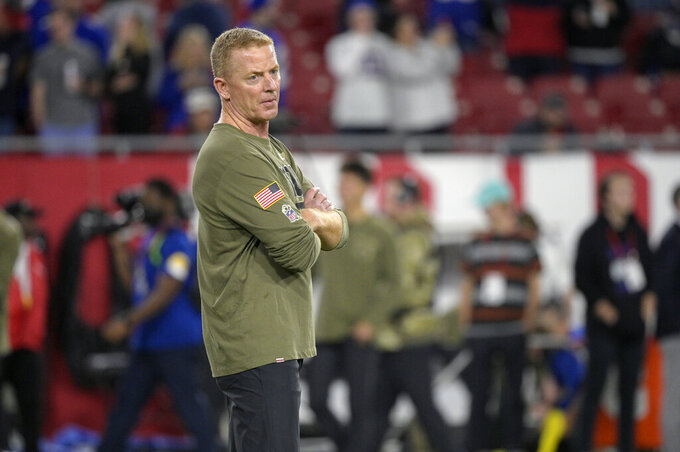 EAST RUTHERFORD, N.J. (AP) — The firing of Jason Garrett as New York Giants offensive coordinator isn't going to drastically change the way the team plays when it has the ball.

Star running back Barkley admitted Friday there might be a few new wrinkles on offense and players have been asked by the coaching staff to discuss plays they like to run so they can be included in the game play. However, he also noted the playbook isn't rewritten 12 weeks into a season and the terminology is the same.

What has to change is the way the players execute the game plan on Sunday, when the Giants (3-7) face the Philadelphia Eagles (5-6) at MetLife Stadium.

Coach Joe Judge is hoping the staff shakeup get his offense to perform better.

“You can say what you want about coaches, but at the end of the day, like I said after the game against the Bucs, as players we’ve got to take some responsibility about it, too, and go out there and make plays,” Barkley said.

The Giants were held to season lows in total yards, points and time of possession in their 30-10 loss to Tampa Bay on Monday night. They have had a short week to prepare for the Eagles, who have won two straight and three of four.

Judge said the remaining offensive coaches combined to come up with a game plan for this week. The coaches turned to the players for help.

It kind of put the players on the spot, and Barkley is definitely one of them. He missed all but one game last season after tearing an ACL against the Bears in Week 2. He went through a major rehabilitation to return for the opener but things have not gone as planned. The offensive line was banged up early, then Barkley sprained an ankle against Dallas on Oct. 10 and missed the next four games.

The 2018 NFL Offensive Rookie of the Year returned against the Bucs but didn't do much. He had six carries for 25 yards and caught six passes for 31 yards.

Barkley seems to be searching for the things that made him one of the NFL's most feared running backs in his first two seasons. He has carried 60 times this season for 220 yards and two touchdowns.

Barkley said his goal is the work through the problems and re-establish his career.

Barkley has been listed as questionable for the game after limited practice this week, but he says he will play.

“It should be a really good game,” Barkley said. “It’s always a good game when we get to go against each other. Just got to do what we do and hopefully come out with a win.”