Bears on 6-game skid after blowing late lead against Lions 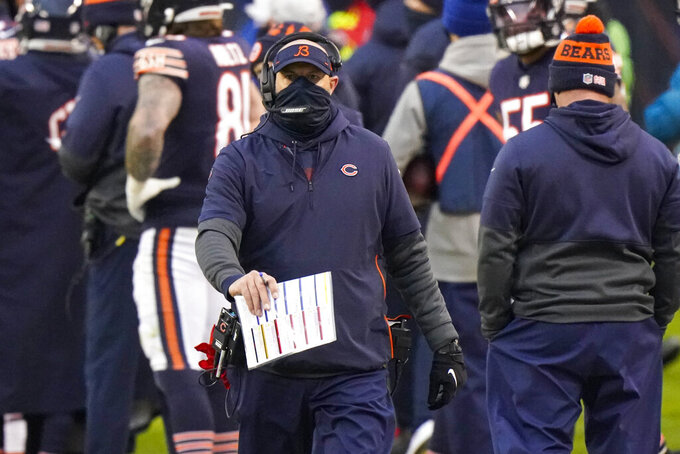 Chicago Bears head coach Matt Nagy on the sideline in the second half of an NFL football game against the Detroit Lions in Chicago, Sunday, Dec. 6, 2020. (AP Photo/Nam Y. Huh)

The Bears did what bad teams do in their sixth consecutive loss — increasing the likelihood of the type of housecleaning that bad teams do at the end of another disappointing season.

Trubisky fumbled with 1:48 remaining, leading to Adrian Peterson's go-ahead touchdown run, and Chicago blew a 10-point lead in the fourth quarter of a 34-30 loss to the Detroit Lions on Sunday.

“To have a lead like this and and lose this way, you know, it stings. It hurts,” coach Matt Nagy said. “They all sting. They all hurt.”

The Bears (5-7) had won five in a row against the Lions, including a dramatic 27-23 victory at Detroit in Week 1. They were hoping another matchup with a struggling Lions team that just fired its general manager and coach would launch a strong finish to the season.

“Obviously, we don’t want to be in this situation, but I don’t believe negativity or holding your head down is going to help us get out of this,” Trubisky said. “So you’ve got to believe that we’re going to turn it around, I think, continue to stay positive and just continue to work hard will help us turn it around.”

Chicago had a 23-13 lead after piling up 253 yards in the first half, including 62 yards rushing and two touchdowns from David Montgomery. Detroit pulled within three on Matthew Stafford's 9-yard TD pass to Jesse James, but Trubisky responded with an 11-yard touchdown pass of his own to Cole Kmet with 11:23 to go.

The rookie tight end celebrated by taking a big swing in a tunnel at Soldier Field, using the football as a bat. But the Bears struck out down the stretch.

Stafford found Marvin Jones for a 25-yard touchdown with 2:18 remaining. Then, with the Bears facing a third-and-4 at their 17, Trubisky was stripped on a sack by Romeo Okwara and John Penisini recovered at the 7.

“I thought the guy made a good play,” Trubisky said. “I was about to get ready to throw. I had one hand on the football and he must have timed it perfectly. So I don't think it's an ongoing problem.”

Two Peterson runs later, Detroit had its first lead at 34-30 with 1:37 to go. Trubisky drove Chicago to the Lions 20 in the final seconds, but Montgomery was stopped for no gain on fourth-and-1.

The Bears might have been able to send Cairo Santos out to try a tying field goal had they converted an extra-point attempt that was blocked after their first TD in the first quarter. Of course, the Lions (5-7) also came up empty on a point-after when Matt Prater missed one after Detroit's first touchdown.

“We have to play better in all three phrases,” Trubisky said.

The defense had another tough day, allowing Stafford to throw for 402 yards and three touchdowns after Nagy was critical of the unit’s performance in the loss to the Packers. The play-calling also was an issue after Chicago rushed for 106 yards on 19 carries in the first half — and 34 yards on just 12 attempts in the final two quarters.

The heartbreaking loss turns up the heat on Nagy and general manager Ryan Pace, but the coach said he isn't interested in talking about his job security.

“I don’t get into any speculation on any of that,” he said. “What my job is to do is to make sure that each and every week I’m giving it everything I can as a coach and as a leader with these guys. I have to make sure that I do that, and any other thing that’s a distraction, that would be taking away from our team. And that would be not good for me or them, so I don’t even get into that.”