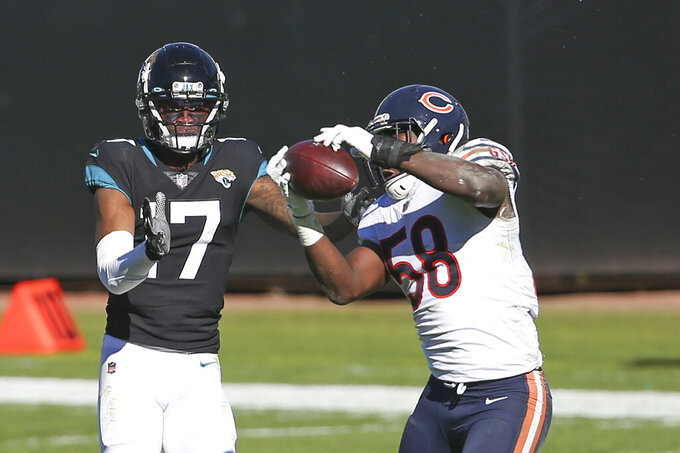 JACKSONVILLE, Fla. (AP) — Jimmy Graham disappeared into a tunnel following his second touchdown catch of the day. He re-emerged after what seemed like forever and found a group of Chicago teammates waiting to celebrate.

It was symbolic of the Bears' season. The team that lost its sixth consecutive game earlier this month has now won three in a row and is on the verge of making the expanded NFC playoffs.

Mitchell Trubisky accounted for three scores, including two TD passes to Graham, and the Bears pounded Jacksonville 41-17 Sunday in a game that meant as much to the Jaguars' long-term future as it did to Chicago’s short-term fate.

The Bears (8-7), who gained control of their postseason path when Arizona lost to San Francisco on Saturday, can make the playoffs for the second time in three years by beating Green Bay at home next week.

“With where we’re at right now as a team, it’s definitely different,” Chicago coach Matt Nagy said. “Green Bay is a hell of a football team and there’s a reason why they’re sitting right now as the No. 1 seed. For us, we’ve got to worry about us. ...

“We’re guaranteed one more game, nothing else. If we do well in that one game, then we’ll have an opportunity for more. But we can’t worry about that. We just worry about us.”

The Jaguars (1-14), meanwhile, set a franchise record by losing their 14th consecutive game and locked up the top pick for the first time in franchise history when the New York Jets beat Cleveland 23-16 a few minutes later.

Bears fans could be seen in every direction at TIAA Bank Field, and the visiting team gave them plenty to cheer about with 28 straight points to start the second half. Numerous Jaguars fans celebrated, too, clearly wanting Lawrence to land in Jacksonville.

It sure seems like a reality for the small-market team that's spent the better part of the last two decades searching for a franchise quarterback. The potential game-changing moment came on the same day the Jags reached a new low for losing.

The Bears' playoff chances appeared to be a long shot following a sixth straight loss. But they responded by winning three in a row, thanks mostly to a suddenly potent offense.

Chicago scored 30 or more points for the fourth consecutive week, the first time the Bears have accomplished the feat since 1965. This one came courtesy of a strong second half. Trubisky started the scoring spree with a 6-yard run and later connected with Graham for the second time.

“It does give us confidence,” Trubisky said. “It all starts with an expectation, just having a high expectation for us in this offense that, ‘This is what we’re capable of and nothing less is going to be acceptable.’”

Trubisky completed 24 of 35 passes for 265 yards, with two touchdowns and an interception. His performance was far from perfect. His interception came in the end zone late in the first half — he inexplicably scrambled and threw into a crowd — with the Bears in field-goal range, and he nearly had another early in the third.

But safety Jarrod Wilson dropped the ball and then dropped to the ground to do 10 pushups.

Allen Robinson finished with 10 catches for 103 yards against his former team. Robinson spent the first four years of his NFL career with the Jaguars.

Graham had four receptions for 69 yards.

Former Bears quarterback Mike Glennon made his fourth start of the season for Jacksonville after competing with Gardner Minshew in practice and had two touchdown passes and two interceptions. Glennon nearly had a third turnover, but nose tackle Bilal Nichols dropped a ball at the line of scrimmage that hit him in the chest.

“It was definitely an interesting week,” Glennon said. “But no excuse for anything like that. We came out pretty well. It was a 10-10 ballgame, but then a poor decision by me before the half and then they got three points and it seemed like it went kind of downhill from there. Unfortunately, we couldn’t kind of recover from there.”

Jaguars fullback Bruce Miller was ruled out with a concussion after a helmet-to-helmet hit on Bears punt returner Anthony Miller.

Bears: Can clinch a playoff berth by beating Green Bay in Chicago next Sunday.

Jaguars: Finish the season at Indianapolis, where nothing can change their enviable draft position.