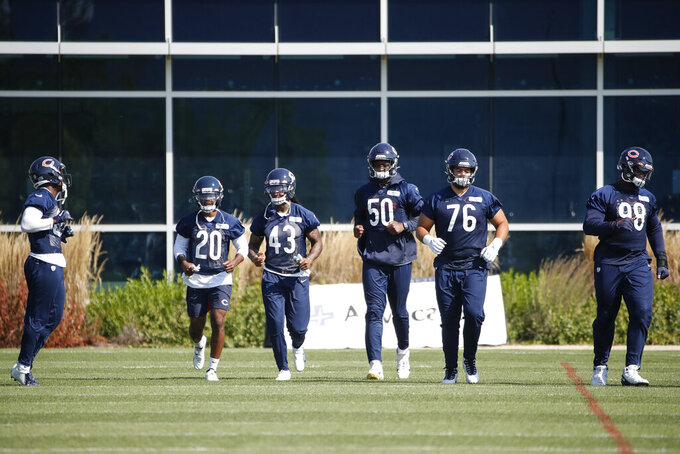 LAKE FOREST, Ill. (AP) — Chicago Bears coach Matt Nagy and his assistant coaches will put on a few pots of coffee and work into the night behind closed doors.

The Bears are finally on the verge of a quarterback decision between Nick Foles and Mitchell Trubisky. They will be watching loads of training camp film, with a decision coming possibly Sunday or even sooner on who starts the season opener against the Detroit Lions.

If the idea was to produce a lopsided winner, the Bears have come up short.

“We feel really good about both of them,” Nagy said. “Being brutally honest as I could be, it’s difficult.”

The Bears have a light practice on Sunday before a day off on Monday. It’s possible Nagy will decide to reveal the starter rather than wait until late in the week as a sort of gamesmanship to throw off the Lions.

“There is one part of it where you could say, ‘Well there is gamesmanship and it hurts Detroit to not know who it is.' But there is another side to it where you just say, ’You know what? It’s hurting yourself if you do that and you need to be able to make a decision to help both of these quarterbacks, and not to mention help our staff as well,' " Nagy said. “So we are taking all of that into consideration.

"We want to do it the right way. It’s out of respect to focus in more on our team than our opponent.”

Not having preseason games was a blow to how Nagy and staff wanted to make assessments. So when coaches make the decision, they’ll be looking at several clear-cut areas. Past performances count somewhat, but what coaches saw in camp means more.

“You always start with decision making and accuracy,” Nagy said. “In our opinion, too, there is situational football involved. Those are probably the top three that we look at, and then how did they perform in training camp, how did they handle certain situations, and both of them we thought did well."

Foles was Super Bowl 52's MVP for Philadelphia as a backup quarterback, and his career has been spent coming off the bench on a moment’s notice. Yet he found this competition difficult due to the lack of offseason work resulting from COVID-19, and getting very little time in the offense.

“I mean it’s been a really unique situation with everything going on in the world, and this year, and not having OTAs, and getting here,” Foles said. “Everything’s expedited. Not only are you trying to play football and learn this new offense, which has similarities to what I’ve done before, but there’s still a ton of new.

“You’re also meeting a lot of new people and trying to build those relationships and learn their names while also learning the area, so all that pulls from your energy. It’s not the first time that I’ve done it, but it’s most expedited, I would say.”

Trubisky had a long way to go after a passer rating of 83.0 last year, 12.4 points below his mark in 2018 when the Bears won the NFC North. He thinks he made his improvement apparent.

“I think overall, just showing that I’ve improved throwing the ball downfield in situations with the team and one-on-one (drills) and routes, just showing that I could make better decisions with the football for the offense ... and being more accurate, especially out and to the left and outside the numbers,” Trubisky said. “I think I’ve shown that I can make those throws and I’ve done better with my footwork, and just being able to lead and run this offense."

NOTES: Defensive end Akiem Hicks returned to practice Thursday for the first time since Aug. 20 after getting past a quad muscle injury. ... The Bears have wide receiver Allen Robinson available now after an ankle sprain earlier in camp, but starting running back David Montgomery remains out with a groin strain and his name is likely to show up on the injury report next week.