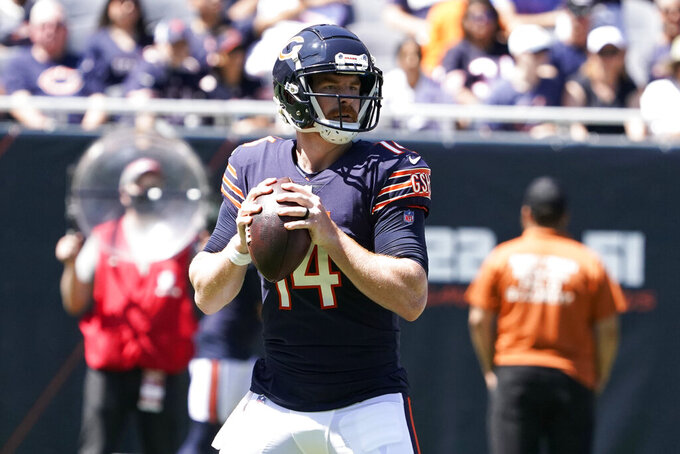 Chicago Bears quarterback Andy Dalton (14) looks to pass against the Miami Dolphins during the first half of an NFL preseason football game in Chicago, Saturday, Aug. 14, 2021. (AP Photo/David Banks)

While this might terrify many NFL quarterbacks, the real trouble for Dalton might be behind him in the form of Bears backup quarterback Justin Fields as Chicago opens the season at SoFi Stadium.

“That’s the worst thing you can do is look over your shoulder,” Dalton said.

Bears fans have clamored throughout the preseason for Fields to start, even while the plan all along has been for Dalton to face the Rams.

“We’re talking about tuning out the stuff you don’t need to focus on and knowing where you need to put your time and effort and all that kind of stuff,” Dalton said. “I think that’s just where I’m at. You don’t worry about all the other stuff.”

The other stuff would be the calls for Fields to play.

Dalton was booed by fans during his very limited play in the preseason, but Bears offensive coordinator Bill Lazor thinks his experience lets him shrug off everything from challenges for his job to charging All-Pro defensive linemen such as Donald.

“It’s hard to put something up there that he hasn’t faced at some point,” Lazor said. “Not that we aren’t going to have the same answer for it that he has, but there tends to be very little panic from a guy who’s faced it before and has had success.

“That’s just kind of what he brings to the table. That (calm) gets pushed onto (teammates) when he’s calling the plays.”

There could be plenty of chances to panic against the Rams.

The Bears struggled to put a viable offensive line on the field in the preseason because of a back injury to rookie left tackle Teven Jenkins and injuries to other blockers.

Donald has 85 1/2 sacks in seven NFL seasons and Dalton knows what his line will be up against.

“I mean, he’s the type of player you have to know where he’s at at all times,” Dalton said. “And I think for him, arguably the best defensive player in the league and I mean he can change a game and we understand that.

“So we’ve got to give him his respect because he’s a great player.”

Dalton has been promised the start since signing in Chicago in March and it’s possible a strong showing against Donald and the Rams defense could go a long way toward cementing his position ahead of Fields.

The Bears will not say whether Fields could get into Sunday’s game in some type of special situations, such as third downs or goal line.

“You know it’s something that, you know, I don’t know,” coach Matt Nagy said at the end of preseason, while wearing a big smile.

Dalton has other concerns.

“There’s a lot that’s gone on since March, but all that’s led to this point right here,” Dalton said. “Regardless of everything that’s gone on, we’re here at Week 1, and this is exactly what I wanted. I wanted this opportunity.

“And now we’re looking forward to making the most of it.”

NOTES: Wide receiver Darnell Mooney and outside linebacker Robert Quinn were limited in practice Wednesday because of back issues. ... Inside linebacker Danny Trevathan, who is on injured reserve, has changed his jersey number from 59 to 6. ... New defensive coordinator Sean Desai said he will direct the team’s defensive scheme from the coaches’ box rather than the sidelines.