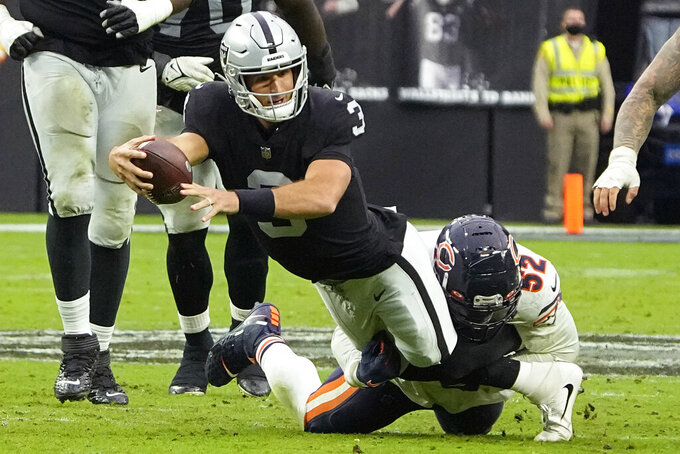 LAKE FOREST, Ill. (AP) — As long as rookie quarterback Justin Fields is still learning on the fly, it never hurts the Chicago Bears to have someone else who can shoulder the burden.

Fields threw for just 111 yards in Sunday’s 20-9 victory over the Las Vegas Raiders, but the defense turned in its second straight dominant effort and the running game continued to thrive even without the injured David Montgomery.

Khalil Mack and the defense, in particular, have helped the Bears (3-2) go from a devastating 26-6 loss in Cleveland two weeks ago to playing for the NFC North lead this weekend at home against the Green Bay Packers (4-1).

“I really felt like we were relentless the whole day against a really good offense,” Bears coach Matt Nagy said Monday about his defense. “You could feel it.

“It was a game where we were able to affect them and I think it all started, too, with 52 (Mack). Every single play, Khalil was all over the place. It was really one of those games you could see that they knew where he was on every play, and he was able to still affect the game.”

The Bears added three more sacks to what had been a league-leading team total of 15 and Mack had one. He also had one on an 2-point conversion which doesn’t go on his stat total, but did impact the game greatly.

“So all in all, it was 11 guys on defense that were just flying around against a really good offense with a lot of good skill players,” Nagy said.

The Bears moved into the top 10 on defense through Sunday’s games, and now are seventh in points allowed.

Their offense ran for 143 yards Sunday to complement that defense. A running team with a strong defense isn’t exactly what pass-happy Nagy intended when he came to Chicago, but if it’s winning football he will live with it.

“I think you adapt to your personnel that you have,” Nagy said. “Every year could be a little bit different.

“I think you see that with some offenses as they grow and as they get to certain things. What I like is that I think we have a really good mix right now within our offense of ways to get to things. If they shut something down we’re able to get to it because we have some multiplicity within the offense. I’m good with it. I like it.”

Run defense. The Bears held the Raiders to 71 yards rushing even without injured Akiem Hicks at defensive end, one of their best run stuffers. They held four of their five opponents to 91 yards or fewer in the run game.

The passing attack. Fields threw his first career TD pass and was lauded by Nagy and teammates for his toughness in a game when he took big hits, but the TD was a 2-yarder to tight end Jesper Horsted and the Bears had no pass plays longer than a short toss that running back Damien Williams broke for 18 yards.

Fields sees the passing game blossoming in the future if they continue to get run blocking as they had Sunday.

Running back Khalil Herbert. Tasked with being a backup to Williams while David Montgomery recovers on injured reserve from a knee sprain, the former Virginia Tech and Kansas back had game highs of 18 carries and 75 yards, while Williams added 64 yards on 16 carries.

“I felt like as a young kid, coming into this environment, he held himself great,” Williams said of Herbert.

WR Damiere Byrd. Acquired as a possible third or fourth receiver, Byrd hasn’t had a reception or been targeted since the season opener, but he has played no less than 28% of the snaps in each game.

Fields suffered a hyperextended knee against the Raiders and Nagy said Monday there is no change in his condition. Fields was well enough to finish the game without a problem.

Starting right tackle Germain Ifedi suffered a knee injury against the Raiders and outside linebacker Jeremiah Attaochu a pectoral muscle injury. Rookie inside linebacker Caleb Johnson had a knee injury. Nagy had no update on those injuries. Elijah Wilkinson stepped in for Ifedi and was effective in run blocking.

8 — The number of tackles by Khalil Mack on Sunday, tying his high total since joining the Bears.

The Bears host the rival Green Bay Packers on Sunday at Soldier Field.