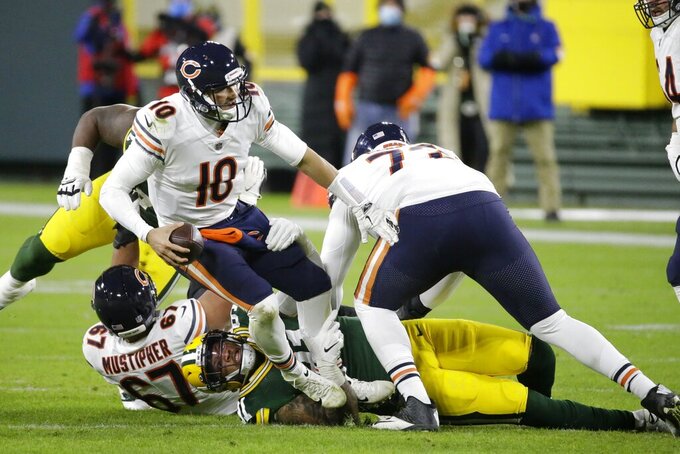 So it’s nothing out of the ordinary for them to approach another week without knowing whether Mitchell Trubisky or Nick Foles will play quarterback. What is a real concern is when their defense is leaking.

Bears coach Matt Nagy on Monday challenged his defense to regain its old form to try and snap a five-game losing streak after a 41-25 loss to the Green Bay Packers.

“We’re fighting and fighting and you get a deficit like that and it’s just hard to overcome. And, oh by the way, it’s even more difficult when you’re playing Aaron Rodgers.”

Rodgers threw for four touchdowns and led three long scoring drives on the Packers’ first three possessions in Sunday’s victory. It seemed to leave Nagy at a loss to explain as the Bears turned their attention to facing Detroit on Sunday at Soldier Field.

“Whatever it is, I know this: We better wake our tails up,” Nagy said. “Every freaking coach on the staff, every player, better wake up and start understanding where we’re at. Have some personal pride. Have a freaking sense of urgency.”

The Bears had been ranked in the top 10 defensively most of the season, but playing without end Akiem Hicks and lineman Roy Robertson-Harris made it difficult to stop simple Packers runs up the middle. The Packers’ 182 rushing yards were the most allowed by the Bears since Dec. 24, 2016, when Washington ran for 208.

“We gave up way too much first and second downs, let them run the ball at will.”

Hicks has a hamstring injury and is day to day. His status for the Lions game is uncertain.

They’re already without Robertson-Harris (shoulder) for the rest of the year due and have been without starting nose tackle Eddie Goldman after he opted out due to COVID-19.

The Bears trail Arizona for the last playoff spot by one game and will know more about a quarterback starter for Detroit later in the week. If they don’t snap out of this tailspin, it might go beyond missing the playoffs: It’s always possible it could mean coaches’ jobs.

“Yeah, I mean, what I would say to that is that’s all a part of our business,” Nagy said. “I mean when we sign up for this every one of us, not just head coaches but coordinators, position coaches, all of our families, we all sign up for that. So you know, that comes along with where we’re at.

“I can’t worry about that right now,” Nagy added. “What I have to do is make sure that I, we, do whatever we’re not doing, we get it fixed, and we get it right.”

The running game made a revival with David Montgomery returning to the lineup. He ran for a season-high 103 yards, based largely on a career-long 57-yard run. The Bears rushed for 122 yards as a team, their most since Week 3.

“I thought David ran really hard,” Nagy said. “I thought the line blocked well for him. David’s a hard runner now. He cares immensely about this game. He’s going to give it every ounce that he has.”

Third-down and red-zone defense was poor for the Bears against Green Bay. They led the league in both categories coming into the game, but gave up touchdowns on four of Green Bay’s five possessions in the red zone and allowed 6 of 11 conversions on third downs.

Mack went without a sack for the third straight game. He has made nine total tackles for the three games without making a hit on a quarterback.

“You gotta understand this situation, get ready for next week, throw this one in the trash, get ready,” Mack said.

The Bears escaped without further injury, and Hicks’ recovery from the hamstring appears their major concern at the moment.

The Bears host Detroit (4-7) on Sunday with Darrell Bevell making his debut as Detroit’s interim coach.