Bears' disappointing season comes down to lack of execution 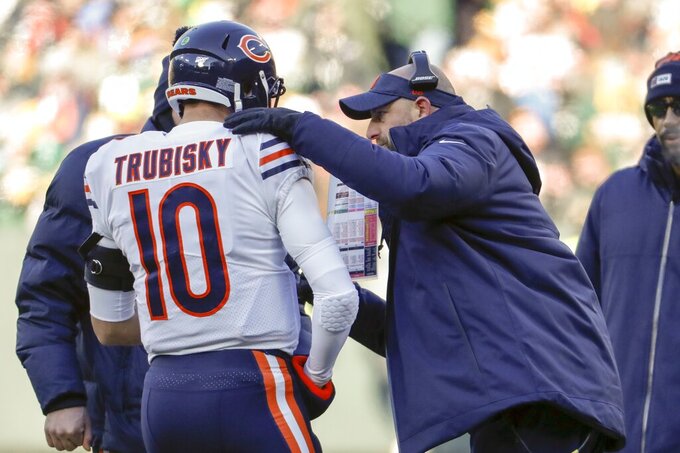 Now, following a 21-13 loss to the rival Green Bay Packers on Sunday, and the Bears eliminated from playoff contention, Chicago fans are having a hard time figuring out what to think.

“It’s tough," Bears wide receiver Allen Robinson said. "As far as us, I think we fought. Just looking at today, we’ve been banged-up a little bit and things like that. I mean, that’s not an excuse at all, but we fought hard. We just haven’t executed as much as we needed to.”

A lack of execution has doomed Chicago (7-7) all season.

Chicago had the ball for nearly 10 minutes more than the Packers on Sunday. But the Bears punted on their first three possessions, turned the ball over on downs on their fourth, and went 9 for 20 on third downs and 1 for 3 in the red zone. Not to mention fumbling the ball inside the Green Bay 7 to end the game after lateraling their way down the field.

“It just didn’t go our way," said Bears quarterback Mitchel Trubisky, who completed 29 of 53 passes for 348 yards, a touchdown and two interceptions. “”ut you can’t ever let one play dictate how the game goes. There were a bunch of plays throughout that game that if we could have made, it could have been different. But you could say maybe ifs ands or buts. There’s a lot of hypotheticals that we just can’t get into. We’ve got to fix the mistakes, watch the film and get better from there.”

The offense was supposed to get better in Nagy’s second year. Trubisky was expected to take a step forward. Rookie running back David Montgomery was going to be the piece the team was missing last season.

None of that happened.

Trubisky was inconsistent throughout the year, often looking worse than he did in 2018, Montgomery failed to live up to the hype.

Nagy elected to keep it positive after Sunday's loss.

“Every year’s different," he said. "Last year for us was a really good year in a lot of different ways, and that was our only year together with me here. This year, it has had its challenges in certain ways, but I said last week it’s made us mentally calloused. So, no one cares about that, but that’s what it has done. And the results, we want to be better, we want to do everything we can, but none of it’s for lack of effort and that’s the part that I appreciate.”

The Bears have two games remaining to salvage what's left of 2019.

“We’ll see what happens," Nagy said. "I know one thing, our guys will continue to fight. They’ll play hard, we’ll coach hard, do everything we can to control again what we can do and that’s playing next week.”