Bears enter draft with issues to address on offense, defense 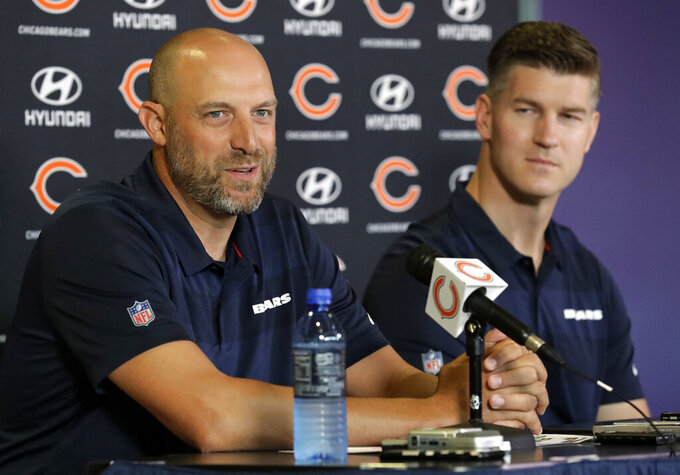 FILE - In this July 19, 2018, file photo, Chicago Bears head coach Matt Nagy, left, speaks as general manager Ryan Pace looks on at a news conference during an NFL football training camp in Bourbonnais, Ill. The Bears come into the draft with a long to-do list and big questions about the direction of the franchise. For all the uncertainty, one thing is clear. Pace and Nagy cannot afford to fumble this. (AP Photo/Nam Y. Huh, File)

CHICAGO (AP) — The Chicago Bears come into the draft with a long to-do list and big questions about the direction of the franchise. For all the uncertainty, one thing is clear.

Chairman George McCaskey opted to stick with them even though the Bears went 8-8 in the regular season for the second year in a row. But the heat clearly is on Pace and Nagy.

The Bears have eight selections and a lengthy list of issues to address on offense and defense, starting Thursday with the No. 20 overall pick.

They could use help on the offensive line and at receiver, not to mention a quarterback to develop behind recently acquired veteran Andy Dalton. There are issues on defense, too. The Bears let former All-Pro Kyle Fuller go for salary-cap reasons and could use another edge rusher opposite Khalil Mack after Robert Quinn managed two sacks last season.

They're in a win-now mode, though they haven't done enough of it lately. They got knocked out in a wild-card loss at New Orleans and haven't advanced in the postseason since the 2010 team played in the NFC title game.

If they don't improve next season, big changes could be in store.

The Bears have a first-round pick for the first time since they took linebacker Roquan Smith at No. 8 overall in 2018. And he's the only one remaining since Pace was hired in 2015.

Receiver Kevin White (No. 7 in 2015), linebacker Leonard Floyd (No. 9, 2016) and quarterback Mitchell Trubisky (No. 2, 2017) were either outright busts or simply did not perform the way Chicago hoped.

The Bears dealt their 2019 and 2020 first-rounders to the Oakland Raiders for Mack prior to the 2018 season.

ESPN draft analyst Mel Kiper Jr. expects the Bears to address the offense in the early going. He could see them taking Oklahoma State offensive tackle Teven Jenkins at No. 20 and going with speedy Auburn receiver Anthony Schwartz in the second round.

“It lines up with the needs,” Kiper said.

The 6-foot-6, 317-pound Jenkins — who opted out of the final month after playing seven games last season — started the past three years, mostly at right tackle with some time at left tackle. He is known as an explosive blocker, particularly in the run game, with his strength and instincts.

Schwartz, a former track star nicknamed “Flash,” is skipping his senior season. He had a team-leading 54 receptions for 636 yards and three touchdowns in 10 appearances before opting not to play in Auburn's bowl game.

The only quarterback Pace has drafted is Trubisky. He is now backing up Buffalo's Josh Allen after four disappointing seasons in Chicago.

If the Bears are going to get one of the top five QBs, they'll have to trade up to do it. Clemson’s Trevor Lawrence and BYU’s Zach Wilson are expected to go to Jacksonville and the New York Jets with the top two picks, and Alabama’s Mac Jones, Ohio State's Justin Fields and North Dakota State’s Trey Lance likely won't be available much longer.

Potential options on Day 2 or 3 could be Stanford's Davis Mills, Texas A&M's Kellen Mond, Florida's Kyle Trask and Georgia's Jamie Newman, who opted out of his lone season with the Bulldogs due to COVID-19 concerns after transferring from Wake Forest.

One difference for the Bears this year compared to 2017 is Pace is working with Nagy and not John Fox.

“It’s just us being connected on the style of quarterback that fits our offense, what we’re looking for from an intangible standpoint," Pace said. “I think it all comes back to the personnel department and the coaches being connected in every move we make. That’s not just quarterback.”

Though they signed Marquise Goodwin and liked what they saw from Darnell Mooney as a rookie, the Bears still seek another playmaking receiver to go with Allen Robinson.

If the Bears decide to address their defense at No. 20, two options at cornerback could be Northwestern's Greg Newsome II and Virginia Tech's Caleb Farley. Newsome was limited to 21 games over three seasons. Farley, who opted out last year because of COVID-19 concerns, underwent a back procedure in March that kept him out of Virginia Tech's pro day.