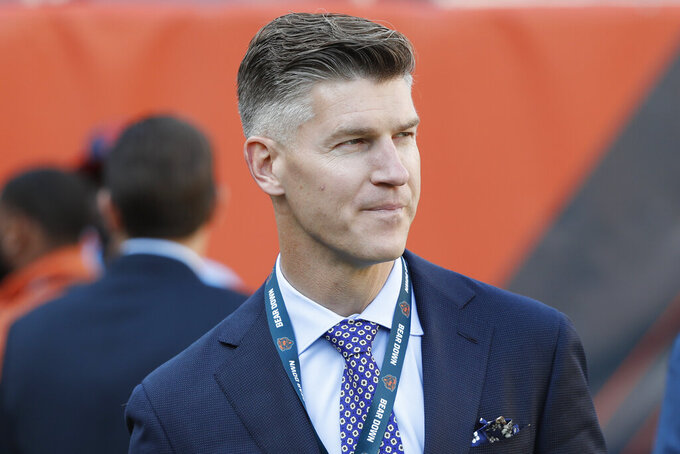 FILE - Chicago Bears general manager Ryan Pace walks the field before an NFL football game against the Green Bay Packers in Chicago, in this Thursday, Sept. 5, 2019, file photo. The Bears head into the offseason with some big issues to address after going 8-8 for the second year in a row, starting with whether general manager Ryan Pace or coach Matt Nagy will be retained. (AP Photo/Charles Rex Arbogast, File)

The Chicago Bears looked as if they were propping open a championship window when they captured the NFC North at 12-4 two years ago.

The Bears head into the offseason with some big issues to address after going 8-8 in the regular season for the second year in a row, starting with whether general manager Ryan Pace or coach Matt Nagy will be retained.

Though they made the playoffs for the second time in three years, they got knocked out in convincing fashion by New Orleans in a wild-card game on Sunday.

“We gave ourselves a shot," star receiver Allen Robinson said Monday. “Obviously we haven’t gotten the outcome that we wanted.”

The biggest question is what the Bears decide on Pace and Nagy. That will be up to chairman George McCaskey.

The Bears dropped eight of their final 11 games counting the playoff loss to New Orleans. A six-game skid — their worst since 2002 — following a 5-1 start turned up the heat on Pace and Nagy.

Chicago jumped back into contention by winning three in a row against struggling teams before closing the regular season with a loss to Aaron Rodgers and the Green Bay Packers.

The Bears reached the postseason as the seventh seed in an expanded field because Arizona fell to the Los Angeles Rams in Week 17. Chicago then lost 21-9 at New Orleans, failing to score a touchdown until Jimmy Graham caught one on the final play.

“When you look at it that way and you say you lost this many heading into the end of it, I think what we need to do as a staff is we’ve gotta say, ‘Why is that? Where is it? And how do we get better?’” Nagy said after the game.

It's not just Pace and Nagy who have uncertain futures. Robinson and quarterback Mitchell Trubisky have expiring contracts.

Trubisky said he wants to remain in Chicago.

Whether the Bears want to keep him — and whether there is a better option through a trade or free agency — is another matter.

“Obviously a lot of that is out of my control, but it feels like home and it feels like we have unfinished business,” Trubisky said.

The No. 2 pick in the 2017 draft, Trubisky has had his ups and downs in Chicago. He made the Pro Bowl as an alternate in 2018, only to take a step back the following year.

The Bears acquired Nick Foles from Jacksonville in the offseason and declined the fifth-year option for 2021 on their once-prized quarterback. Trubisky opened this season as the starter, only to get benched in favor of Foles during a Week 3 win at Atlanta. He returned to the lineup in late November and appeared more comfortable, with the Bears calling more rollouts rather than have him drop back to pass.

Robinson said “everything is pretty much on the table," whether it's re-signing with the Bears or joining another team. Chicago could also slap the franchise tag on him.

No matter what happens, he's in for a big payday.

Robinson said he has a “great fondness” for the city and the organization. But? “Sometimes in things like this there are more things that weigh out than just fondness,” he said.

The Bears could wind up paying a big price for not agreeing to an extension with Robinson, whether they keep him or lose their leading receiver.

“From my standpoint, I personally feel like we had an opportunity to be able to get something done over the past 365 days,” he said. "But again, I don’t know that that really affects me too much as far as however things play out.”

Chicago's defense ranked among the top 10 for much of the season. But that group looked more vulnerable as the year progressed.

The Bears ranked 11th overall. But they tied for 25th in the NFL in takeaways with 18 and finished with 35 sacks, 17th in the league.

Running back David Montgomery will look to build on a breakout season. A third-round draft pick in 2019, he ran for 1,070 yards and eight touchdowns. He also had 438 yards receiving and two TD catches.

Montgomery was helped down the stretch by a revamped offensive line, running for 598 yards and seven touchdowns in the final six regular-season games.

Kicker Cairo Santos set a franchise record for consecutive field goals made and gave the Bears the stability they'd been seeking since they cut Robbie Gould prior to the 2016 season.

Santos made his final 27 attempts in the regular season plus a 36-yarder on his lone try on Sunday. Gould held the Bears previous records for consecutive field goals made in a season (24 in 2006) and overall (26 from 2005-06).