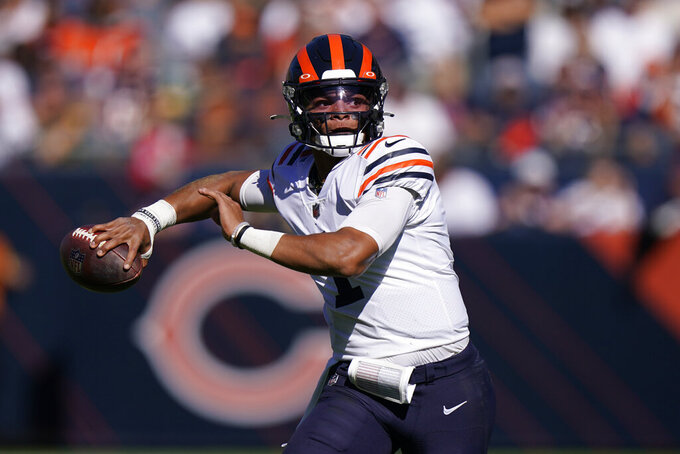 LAKE FOREST, Ill. (AP) — What Justin Fields learns by battling teams with Hall of Fame-caliber quarterbacks takes on less significance than what he learns guiding the Bears offense against NFL defenses.

Sometimes, though, they can be one and the same.

For the second straight week, Fields squares off against an opponent with a quarterback destined for the Pro Football Hall of Fame in Tom Brady, after the Bears rookie passer learned a valuable lesson facing Green Bay’s defense last week when Aaron Rodgers and the Packers pulled out a 24-14 win at Soldier Field.

The lesson learned was NFL success stems from repeating good plays and not just producing one on occasion.

“That’s one big difference I’m starting to find out is you’ve got to put drives together rather than just have a good play here, have a good play there,” Fields said. “I mean, because if you have a bad play in college, it’s easy to get that yardage you just lost the next play. Where in the NFL, it’s not as easy.

“So just putting good plays together back to back and just creating more drives that create more momentum and just get us more in a rhythm.”

Fields put together a series of strong plays twice last week and coach Matt Nagy saw it as a sign of real progress.

One was on the first Bears possession when Fields completed two passes and then Marquise Goodwin drew a defensive pass interference penalty at the Green Bay 1-yard line.

“When you can play quarterback and play on time and in rhythm you see good things happen and that was awesome, those three plays right there,” Nagy said.

The other series was a fourth-quarter TD drive when Fields improvised a few times.

“There is an ability of him right now,” Nagy said. “I think what we’re doing is we’re finding some throws that we see he does well within the offense. So what we want to do is be able to do more of those.

“On top of that, his decision-making in general has been pretty good, and that’s growing. Once he keeps getting that better and better, the athletic stuff of making plays and making throws is gonna come.”

The Bears have won two of the four starts by the former Ohio State standout and another game when he played more than a half in place of the injured Andy Dalton.

The defeats and sacks he has taken have also taught him something.

“You just have to not necessarily accept the fact, but we’re not in the Big Ten where Ohio State is most likely more talented than the other teams you play,” Fields said. “It’s the NFL now. It’s a longer season so you just have to bounce back — you get knocked down you just have to keep coming back.

“As long as we do that we will be good and we will continue to grow.”

Doing this and winning against Tampa Bay and Brady won’t be easy after the Bears surprised the eventual Super Bowl champions 20-19 last year at Soldier Field with Nick Foles at quarterback.

Tampa Bay’s defense is No. 1 against the run and forces passing attacks into pressure-packed situations.

Fields saw Rodgers handle a difficult situation against a strong Bears defense last week, and learned from it. What he learned is exactly what he sees from Brady on film, and what he has noticed in his own play.

“I think you can just take away how (veterans) operate their drives and how they operate a game,” Fields said. “I think that’s one thing I took away from last week is just, like I said before, the drives that you have to put together to consistently score.

“You have to put together a lot of plays on a good drive to score. It just can’t be two, three good plays on a drive.”