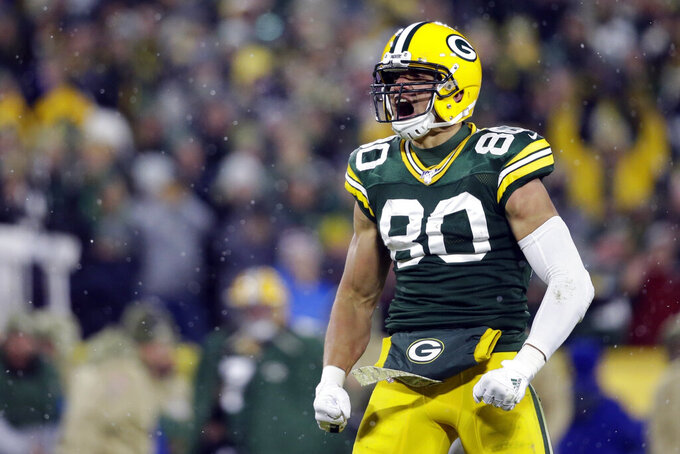 Bew FILE - In this Nov. 10, 2019, file photo, Green Bay Packers' Jimmy Graham reacts after catching a pass for a first down during the first half of an NFL football game against the Carolina Panthers in Green Bay, Wis. The Chicago Bears have finalized a two-year contract with Graham on Thursday, March 26, 2020. (AP Photo/Jeffrey Phelps, FIle)

LAKE FOREST, Ill. (AP) — Jimmy Graham insisted he can become a dominant tight end again. And he looks forward to showing it in Chicago.

The Bears finalized a two-year contract with the former All-Pro and one-year deals with six other players on Thursday.

The Bears hope Graham can rediscover the form that made him a star with New Orleans and Seattle before getting released by Green Bay two weeks ago. That would give them a huge boost at a position where they got little production last season, and help boost an offense that ranked among the NFL's worst.

“This opportunity is everything for me,” Graham said. “I take it extremely serious. I’m excited for us to get by this as a country so I can get back to work and march my way back up to the top, because I’ve always said, if I didn’t think I had the ability to dominate this league then I wouldn’t play anymore.

The NFL has placed restrictions on travel and access to team facilities because of the COVID-19 pandemic.

“This is kinda the first world event, to this magnitude, since probably World War II," Graham said. "A lot of people are struggling and a lot of people are hurting as we just live day by day. And to go kinda through this, to see my second free agency period, just like everyone else is going through, it’s been completely different and just weird. As I think everyone here in America and all across the world, every day for them is kinda weird, to see empty streets and to be at home trying to get through this.”

A five-time Pro Bowl selection, Graham has 7,883 yards receiving and 74 touchdown catches in 10 seasons with New Orleans, Seattle and Green Bay. He spent his first five years with the Saints, when Chicago general manager Ryan Pace worked in their front office.

Pace had a hand in drafting Graham even though he played only one season of football at Miami after four years on the Hurricanes' basketball team. The Saints took him in the third round in 2010.

Graham made the Pro Bowl in his second season and was an All-Pro for New Orleans in 2013 when he had 1,215 yards and led the NFL with 16 touchdown receptions. He had 447 yards and three touchdowns for Green Bay last season and was released two weeks ago by the Packers after two years.

“Obviously that's kind of one of the big stories this offseason is our quarterback room, but I'm excited to work with both of them and to see where I can help both of them and where we can all get on the same page,” Graham said.

Chicago finished 8-8 last season and missed the playoffs for the eighth time in nine years after winning the NFC North at 12-4 in 2018.