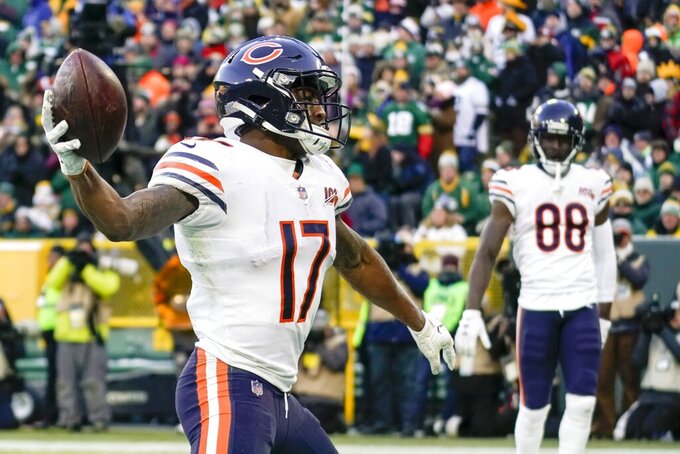 LAKE FOREST, Ill. (AP) — The playoffs are out of the picture for the Chicago Bears after Sunday's 21-13 loss to the Green Bay Packers.

Matt Nagy's second season as coach had resulted in a 7-7 record but nothing will change for the team going into its final two games.

Nagy said Monday the team will not sit out starters to look at other players against the Kansas City Chiefs on Sunday night. Mitchell Trubisky remains at quarterback and the idea is to play out the string as if they were still competing for a playoff berth.

"So my message to the guys is, we're rolling," Nagy said. "There's nothing that changes. It stinks that we can't get to the playoffs, but that's on us. We made this.

"Hopefully we learn from it and remember this feeling. But these next two games, to us, are very important and we're gonna play them hard.”

The Bears won the division title last year at 12-4 in Nagy's first season.

"This is the first time that we're in this situation in the year and a half or two years that I'm here," Nagy said. "I know how our guys will respond."

Against the Packers, the Bears experienced many of the same problems they had offensively in losses prior to their three-game winning streak against the New York Giants, Detroit Lions and Dallas Cowboys.

It resembled their first game with Green Bay in the way the running game struggled, Trubisky had trouble throwing within the pocket and his offensive linemen struggled to block a persistent Packers pass rush.

It led to Trubisky openly questioning his coach's tactics for helping his blockers and moving the pocket.

"I felt like we could've taken more pressure off them moving the pocket a little more and getting me out," Trubisky said afterward.

Nagy said there were adjustments made to Green Bay's defense as the game progressed.

"We communicated that with the whole team and made adjustments on the fly," Nagy said. “I think for all of us, just the biggest thing, is just trying to do it together and execute everything that's there.”

The pass defense stood out through much of Sunday's game as they held Aaron Rodgers to less than 50 percent completions (16 of 33) and only 203 yards with one touchdown and a passer rating of 78.2. Three completions accounted for 110 yards so they held Rodgers to 93 yards on his other 13 completions.

The running attack struggled after two straight games of improvement, preceded by an entire season of being mired. Running backs averaged only 2.9 yards a carry with 67 yards on 23 attempts. David Montgomery was limited to 39 yards on 14 runs.

Allen Robinson earned his second 1,000-yard receiving season with seven catches for 125 yards. He has 1,023 yards, and also achieved a career high in receptions with 83.

Khalil Mack had one tackle against the Packers, a tackle for loss. He went without a sack for the seventh time this season and has two sacks in the past six games. Mack is still 2 1/2 sacks shy of extending his streak of double-digit sacks to five straight seasons.

Mack has been getting double- and even triple-teamed by blockers.

"That's never gonna change for the rest of his career," Nagy said. “Would we love to be able to see more (sacks)? Yeah, but none of it is because of effort or scheme or anything like that. That's just the way it was yesterday.”

Though the Bears escaped without additional reported injuries, concern focuses on defensive end Akiem Hicks. He came off injured reserve to play and wore a large brace on his dislocated left elbow. Then he left twice in pain to go to the injury tent but returned both times to play. Asked afterward if he'll keep playing with only two meaningless games remaining, Hicks said: "I love the game."

"I will say this in regards to how he played yesterday, he was unbelievable," Nagy said of Hicks. “I thought he played lights-out. Even all the stuff, fighting through the aggravations of the injury throughout the game, the way he played and the plays he made yesterday, that was fun. We missed that. That was fun to watch.”

7 — The Bears went seven full quarters before they scored a touchdown against Green Bay's defense this season.

Nagy faces his mentor, Kansas City coach Andy Reid, at Soldier Field on “Sunday Night Football.” For the Bears, the game means nothing more than pride. The Chiefs are headed to the playoffs and still could get a first-round bye, but trail New England by a game.