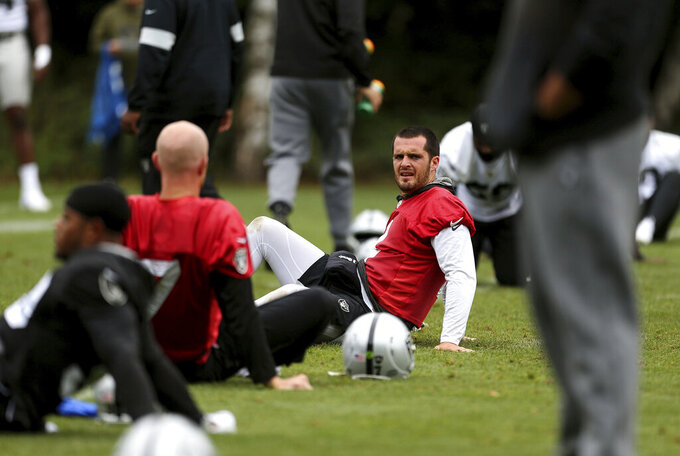 Oakland Raiders quarterback Derek Carr attends a training session during the media day at The Grove Hotel, Watford, England, Friday, Oct. 4, 2019. The Oakland Raiders are preparing for an NFL regular season game against the Chicago Bears in London on Sunday. (Steven Paston/PA via AP)

LONDON (AP) — The Oakland Raiders and Chicago Bears are taking vastly different approaches to their trip to London.

The Raiders spent the entire week here after flying straight from Indianapolis following last week's game. They held three practices just like they would back home, got some opportunities to take in some sights, like a soccer game, and did plenty of bonding while acclimating to a new time zone and environment.

"It's been wonderful," Raiders coach Jon Gruden said Friday. "We've had a great acclimation here to the time zone. The hotel setup is great, the practice field is sensational and we're not going to have any negative impact on our performance because of the time zone. We'll be ready to go."

Gruden opted for this approach after choosing to spend most of the week back home in the Bay Area last year before arriving on Friday and losing 27-3 to Seattle in London.

For the Bears, the game on Sunday is like a business trip. They arrived from Chicago on Friday morning, held a practice at a rugby field in the afternoon and then tried to rest up before playing their game. Coach Matt Nagy opted for that approach after having done it the same as an assistant for Kansas City in 2015 when the Chiefs beat the Lions 45-10.

"It wasn't too bad," receiver Allen Robinson said. "Once you got out there and got the blood going a little bit, it wasn't too bad. I thought we had a really crisp practice today, not just for getting off the plane but in general. We looked sharp today. I don't envision any jet lag on Sunday."

Not that an early arrival guarantees any success. The Raiders went straight to London from the East Coast in 2014, getting a full practice week here and time to acclimate. They ended up losing 38-14 to Miami and coach Dennis Allen was fired soon after they arrived home.

But they still decided spending more time would be the better approach this year.

"Certainly, we thought it would be an advantage for us," said offensive coordinator Greg Olson, who is coaching his eighth game in London. "We had a chance to come last year, we came over on a Thursday and we just didn't feel like our players were rested enough, so we decided to make a change this year in the schedule and that's the reason why we decided to come Sunday, but I feel like right now our players had a good practice. They were full of energy, they looked rested, so we're counting on the fact that we came here Sunday to give us a little bit of an advantage."

The extra time allowed some of the players to check out Tottenham Hotspur Stadium on Tuesday for a Champions League game against Bayern Munich.

Quarterback Derek Carr got to see the stadium where he will play, got to sit in the chairman's suite and even had tea at halftime in an experience far different from what he is used to back home.

But the biggest benefit comes in the extra rest.

"I definitely feel better, that's for sure," he said. "My body feels better, I know our team feels better. Having that day off when you first get here and then having another day off after that to rest and get right and eat, get your metabolism going back the right way and things like that. As a family man I hate it, if I'm going to be honest, but as a quarterback I love it. So, I think coming the whole week is a good move."

The Bears took the opposite approach, staying in Chicago after last week's home game against Minnesota to get a couple of practices in at their facility before leaving Thursday.

Star edge rusher Khalil Mack said he'd wait to do sightseeing until coming back on vacation. His focus is on playing his former team for the first time.

"People could put us in Australia, China, whatever," he said. "The Chicago Bears will be ready to play ball on Sunday."

NOTES: DE Clelin Ferrell (concussion) and WR Tyrell Williams (foot) have not practiced all week for the Raiders and are questionable. ... WR Dwayne Harris (ankle), receiver J.J. Nelson (knee), and G Richie Incognito (back) are also listed as questionable for Oakland. ... Bears DL Akiem Hicks (right knee) will be a game-time decision. ... QB Mitchell Trubisky (shoulder), WR Taylor Gabriel (concussion) and G Ted Larsen have all been ruled out for Chicago.