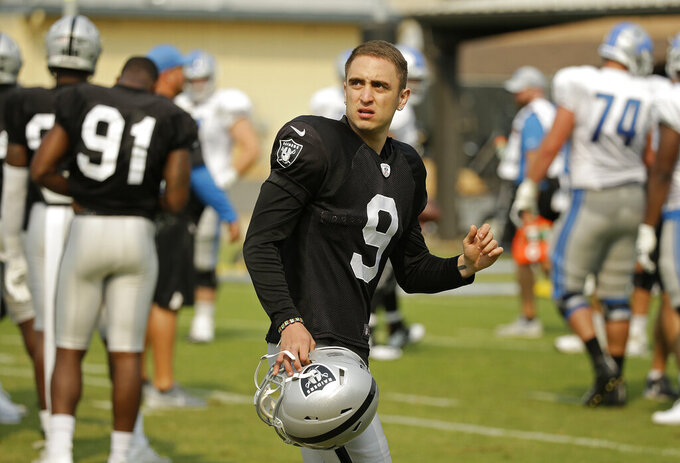 FILE - In this Aug. 7, 2018 file photo Oakland Raiders kicker Eddy Pineiro prepares to warm up during NFL football practice in Napa, Calif. Elliott Fry and Eddy Pineiro alternate day by day performing the kicking duties for the Chicago Bears as they seek to replace former kicker Cody Parkey. Both have shown strong, accurate legs in the first practices, hitting from 60 yards or longer. (AP Photo/Eric Risberg) 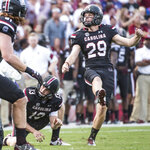 "That was pretty exciting," Smith said. "You don't have many guys hitting a 60-yarder. It's pretty sweet."

Then Eddy Pineiro made everyone forget the 60-yarder by making a 63-yard field goal at Sunday's practice.

When training camp began, coach Matt Nagy suggested the kicking competition might resemble a free-throw contest at a basketball camp. It actually has been more like a tennis match, with one player trying to hold serve one day and the other trying the next day, as the Bears seek to end a kicking problem lingering from Cody Parkey's double-doink miss in the playoffs.

"Everybody knows that we've got to get this thing right," Nagy said. "The kickers know that. We've been very honest with them on where we're at going about this thing.

"I think when you're honest with them, there's no surprises. And it's on them. It's not anybody else but them to make it and produce."

Fry is the accurate former South Carolina and Alliance of American Football kicker who signed as an undrafted free agent. The Bears spent a seventh-round pick to acquire strong-legged Pineiro from the Oakland Raiders after an extensive offseason search that once saw nine kickers trying field goals at Halas Hall.

The kicking format at camp is unusual.

Instead of alternating kickers each practice attempt, Nagy gives each kicker the full day to try a series of field goals in the middle of practice under a simulated kick rush. They might also get a few more attempts during two-minute drills. The other kicker sits that day.

One day it was Fry making all but one kick and drilling a 60-yarder, then the next day Pineiro missed just once and chose to move it back 3 yards for his 63-yarder.

On Monday, Fry tried in conditions the Bears will find difficult to duplicate for Pineiro. He kicked in the rain on a wet field and made 6 of 8, with one miss coming when he slipped badly and fell while trying a 51-yarder. Fry then got up and made a 51-yarder.

"I love it," Pineiro said. "I think alternate days is awesome. It gives the whole day for that person and just that person instead of going one-and-one, one-and-one."

Fry finds the day when he doesn't kick is a benefit.

"I think No. 1 it lets us kind of rest our legs," Fry said. "That's a big deal with kickers, making sure you're fresh every day.

"But I think just like not having confusion and getting some rhythm kind of going where you know that today's your day, just like it would be in a game. You know you're not going to be in the season splitting reps between someone. It's going to be your day and you're going to go for it."

The pressure builds as teammates watch, and added pressure for kickers comes from fans who have packed into Bears training camp. On the weekend, they had more than an estimated 17,000 for two practices and they were hollering at the kicker, who normally is all but invisible in training camp.

"I've never seen so many people cheer so loud in a practice before," Pineiro said. "I mean, I've heard it in a game, but in a practice it's unreal."

If they were missing the kicks, it could turn the other way with impatient fans who remember the Parkey situation.

"It's like the quarterback position," Nagy said. "There's only one. And then obviously when the microscope is on them and us because of what happened last year, they get it."

Fry said he's more worried about making his kicks than about what happened with Parkey last year.

"I think probably a lot of people outside the building probably talk about it, probably fans and stuff, but again the team and the coaches and all of us are focused on this year," Fry said. "I wasn't here last year. It really has nothing to do with us."

Nagy said the preseason will mean a great deal for both kickers, just like the daily competition.

The Bears were heavily criticized for how they were trying to find a kicker using an unorthodox manhunt style. They even brought in a kicking adviser to assist special teams coordinator Chris Tabor in determining a winner.

Nagy has faith all will eventually work out for a team with few weaknesses aside from kicker.

"How do you not love two kickers battling for one spot, competing their tails off after everything that's gone on with our team and our city?" Nagy said. "I appreciate that."