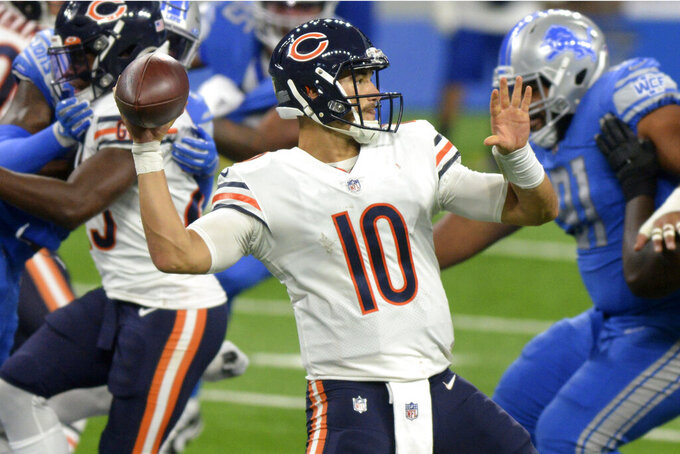 FILE - In this Sunday, Sept. 13, 2020, file photo, Chicago Bears quarterback Mitchell Trubisky throws a pass in the second half of an NFL football game against the Detroit Lions in Detroit. The Bears hope to win back-to-back games to start a season for the first time in seven years and deny the Giants their first victory under new coach Joe Judge when New York visits Soldier Field on Sunday (AP Photo/Jose Juarez, File)

CHICAGO (AP) — The Chicago Bears came into the season determined to show they're more like the team that won the NFC North in 2018 than the one that missed the playoffs a year ago.

The Bears aim to win back-to-back games to start a season for the first time in seven years and deny the Giants their first victory under new coach Joe Judge when New York visits Soldier Field on Sunday.

Chicago rallied from 17 points down behind three fourth-quarter touchdown throws by Mitchell Trubisky and hung on for a 27-23 victory at Detroit last week. The Giants lost 26-16 to Pittsburgh on Monday night.

“To battle back the way we did says a lot about this team and this offense and what we’re capable of," Trubisky said.

Coming off an 8-8 year, the Bears looked for three quarters like they were headed toward a loss. But they came out on top in a season opener for the first time since a 3-0 start in 2013.

The Giants, with 12 wins since the 2016 playoff season, also have much room to improve. Saquon Barkley got swarmed by the Steelers and was held to 6 yards on 15 carries in one of his worst games since he was drafted with the No. 2 overall pick in 2018. He'll try to get going against a top 10 defense that got picked apart at times last week.

“We’ve got to do some things to help Saquon throughout the game," Judge said. "He’s a key part of our team, he’s an integral part of our offense. We’re going to keep feeding him the ball and he’s going to make some plays for us.”

A shotgun quarterback since he was in middle school, Trubisky might have a new home under center. He took about half his snaps there in the opener. And it looks like more of that is coming.

“You want to be able to keep things off-balance, and we still have a lot of stuff from the gun," coach Matt Nagy said. “But as we’re trying to create this identity of who we are you can probably feel there’s a little bit more of that for sure this year.”

The change stems from the Bears' self-scouting in the wake of last season. They decided the offense would work better and keep defenses guessing more with the quarterback taking fewer shotgun snaps.

Trubisky felt the line blocked better when he was under center, that play-action functioned more smoothly, and the passing game benefited as a result.

“If you’re just going gun every time, I think it makes it hard on the O-line, they’re going to pin their ears back and get a lot of tough rushing,” he said. "And if you go under center, it really slows the rush down because they have to respect more of the run factor.”

The Giants’ didn’t have a running game against the Steelers.

Not only was Barkley shut down, he had eight rushes for negative yards. His longest run was 7 yards. New York finished the game with 20 carries for 29 yards, largely because quarterback Daniel Jones had four runs for 22 yards.

Much of the pressure is on the revamped O-line.

While guards Will Hernandez and Kevin Zeitler returned, there are three new starters, Andrew Thomas, the No. 4 overall draft pick, is at left tackle. Nick Gates has been converted to a center and veteran Cam Fleming is at right tackle. Look for improvement — or some changes up front.

When it came to third-down conversions last week, the Bears were third rate. No surprise, extending drives was a big point of discussion this week.

The Bears were 2 of 11 on third downs in the opener, failed on all six in the first half and missed their first seven in all. They finally broke through late in the third quarter, when Anthony Miller caught an 18-yarder to keep a touchdown drive going.

At 18%, Chicago tied San Francisco for the worst rate in the NFL.

The Giants signed a solid cornerback, getting James Bradberry from the Panthers in free agency.

They are still looking for somebody to play the other side. DeAndre Baker was supposed to start, but he was released because of an offseason arrest. Second-year pro Corey Ballentine got the start against the Steelers, and Ben Roethlisberger went after him. Ballentine, who was good in run support, probably will be in the starting lineup again. Don’t be surprised if either Isaac Yiadom or Darnay Holmes gets a little more playing time.

The Bears' defense ranked among the NFL's best in recent years. It was hard to tell at times in the opener.

The Monsters of the Midway gave up 426 yards and sacked Matthew Stafford just one time. They also came up with one turnover, though it was a big one: Kyle Fuller's interception to set up the go-ahead touchdown.