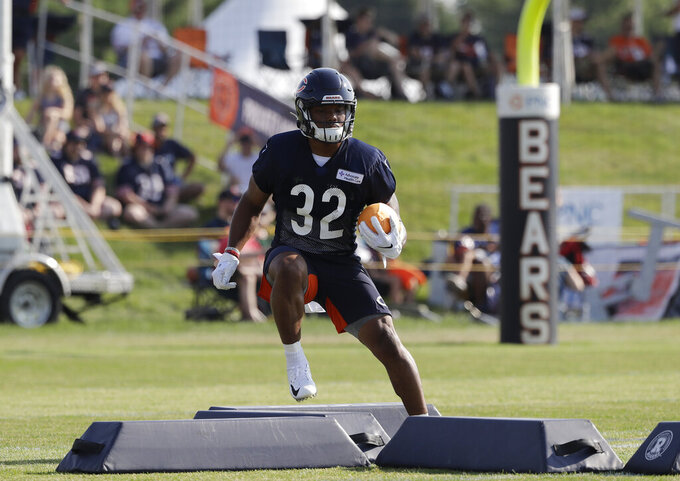 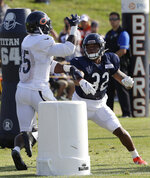 One thing Trubisky is hoping to see from the Bears' offense when they open the preseason Thursday at home against the Carolina Panthers is the running game.

The Bears traded running back Jordan Howard to Philadelphia in the offseason and drafted Montgomery in the third round to lead a revamped running game. They haven't had much chance in practice to see Montgomery play to his strengths of breaking tackles and making tacklers miss, although he did break four tackles on one run last week.

They'll have the first real chance to see how he fits in coach Matt Nagy's attack against the Panthers.

The running game is just one of two questions about the offense the Bears hope to answer against Carolina, but every indication so far is that Montgomery can handle stepping into a versatile role as a runner, pass receiver and pass blocker.

"Nothing is going to change from what we saw on tape at Iowa State," Nagy said. "He has some of the best vision that I've seen in a long time. He feels where the defenders are before they show up.

"Now, the defenders in this league are a little bit bigger, they're a little bit faster and they hit a little bit harder, and the one thing he did in his career was he protected that football. And that's what he's going to have to continue to focus on. I know that he'll do that."

Montgomery has seemed at ease catching passes, but running pass routes in a complex offense requires time to master.

"It's definitely something new to me as far as coming from college and not running a lot of routes," Montgomery said. "But I'm definitely capable of getting better and running better routes."

"Pass pro is usually something in college that guys aren't asked to do a lot," London said. "He's understanding how we want to attack guys and how the best way to pass protect is. So we're happy with him there."

"It's a great playbook for any guy who wants to come out here and work hard and try to run the ball and try to do what (Nagy) asks for," Montgomery said.

The Bears have one other key concern now besides their running game.

The health of their top two tight ends is in question. First Adam Shaheen missed a series of practices because of back stiffness. After Shaheen returned, starter Trey Burton missed the last three practices following what Nagy labeled "sluggish" earlier practices.

Burton had offseason sports hernia surgery and has started slowly before going to the sideline.

Nagy said he has no timetable for Burton's return, but it shouldn't be surprising Burton is still not ready to go 100%.

"He didn't do a lot, with the surgery and everything for five months," Nagy said. "It's hard to come back and just be thrusted in and try to look like yourself.

"We're trying to slowly do it. We'll pick it up. We'll start getting him more reps as we go here. But I'm protecting him right now."

Bears kickers followed a sterling effort in Saturday's scrimmage at Soldier Field with one of their worst days in training camp. Eddy Pineiro missed three times and Elliott Fry missed twice. "They know they've got to be better," Nagy said. "Today wasn't their day. But, again, how do they respond the next time they're out there?" ... Rookie WR Riley Ridley continues missing practice with a hamstring injury suffered in the first practice of camp.