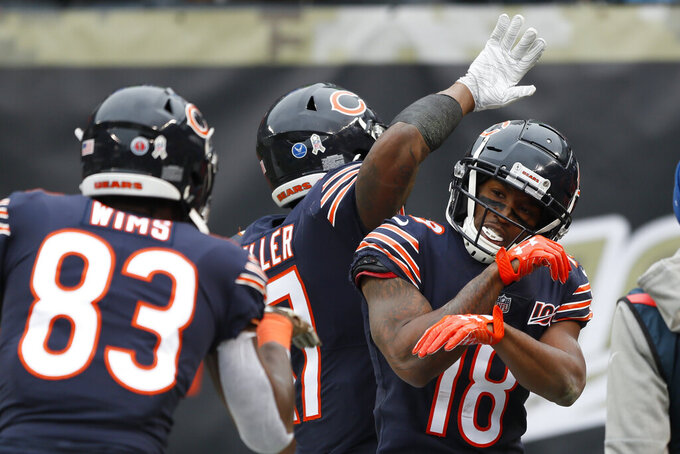 LAKE FOREST, Ill. (AP) — It would have been easy for the Chicago Bears to get carried away with their emotions after ending a four-game losing streak.

Instead, the Bears recognized a 20-13 victory over the injury-riddled Detroit Lions for the flawed effort it was, and they turned their focus on preparing for a Sunday night game in Los Angeles against the Rams.

"And hopefully it builds confidence for our offense, and we just keep working hard and get back to it and try to be 1-0 next week again."

Although the Bears (4-5) scored 20 points in a stretch of just under six minutes, and Trubisky broke out of a recent slump with three touchdown passes, they went through huge chunks of the game unable to advance the ball against a struggling Detroit defense.

After taking a 20-6 lead with touchdowns on three straight possessions, the offense went three-and-out on five of its last six possessions. The defense needed to make a final stand to preserve the win.

"Just finish, let's keep our foot on the gas and finish," wide receiver Allen Robinson said. "We had been able to find some success in that second quarter and get some completions. As long as we continue to string some completions together, we'll continue to make plays."

The Bears struggled to protect their 20-6 lead against backup quarterback Jeff Driskel, who filled in for Matthew Stafford, who was sidelined by hip and back injuries.

"There's still a lot of things that we need to get better at, we understand that," coach Matt Nagy said.

The rush defense continues to thrive despite losing inside linebacker Danny Trevathan in the first half with a left elbow injury. The Bears allowed Lions running backs to gain only 61 yards on 22 rushes.

The way the Bears open games on offense has to improve if they're going to make a run in the season's second half. They have scored only one touchdown on an opening drive in nine games and have had three-and-outs to open three of their last four games. They haven't had the ball for more than four plays on opening possesions to start any of the four games.

"It goes back to right now we got to be better on the opening drive," Nagy said. "We're not as good there, and we need to be better."

Fourth-year linebacker Nick Kwiatkoski came on after Trevathan's injury and had an interception, a sack and nine tackles. Earlier this year, Kwiatkoski replaced Roquan Smith and produced a similarly strong effort.

"When you lose a guy like Danny in the middle, that leadership part, you lose a little bit, but then you have Kwit come in and do such a great job," Nagy said. "He was all over the field (Sunday). That was really neat to see."

Tight end Adam Shaheen didn't make it onto the field Sunday in uniform. He was deemed inactive.

The second-round pick of general manager Ryan Pace in the 2017 draft, Shaheen had 13 starts and 27 games played but has just nine receptions this season and lost a fumble on a kickoff at the end of a 22-14 loss Nov. 3 to the Eagles.

Nagy spelled out what he expects of Shaheen.

"We want all of our players to be able to be completely detailed and play hard and do everything they can to be the best player they can be," he said.

Trevathan's left elbow injury was serious enough that injured reserve could come into play, according to Nagy. Trevathan left the field with the arm dangling and more will be known on the injury later in the week. Trevathan is a free agent after this season. ... Also hurt was tight end Trey Burton, who suffered a calf injury.

5 — The Bears allowed the Lions five sacks after Detroit made only 14 sacks for the entire first half of the season. The five sacks matched the most the Bears have allowed this season and came on a Sunday when they switched left guard Cody Whitehair to center and center James Daniels back to left guard. Moving those players back to positions they played last year didn't seem to help a great deal. The Bears still averaged only 3.4 yards a rushing attempt.