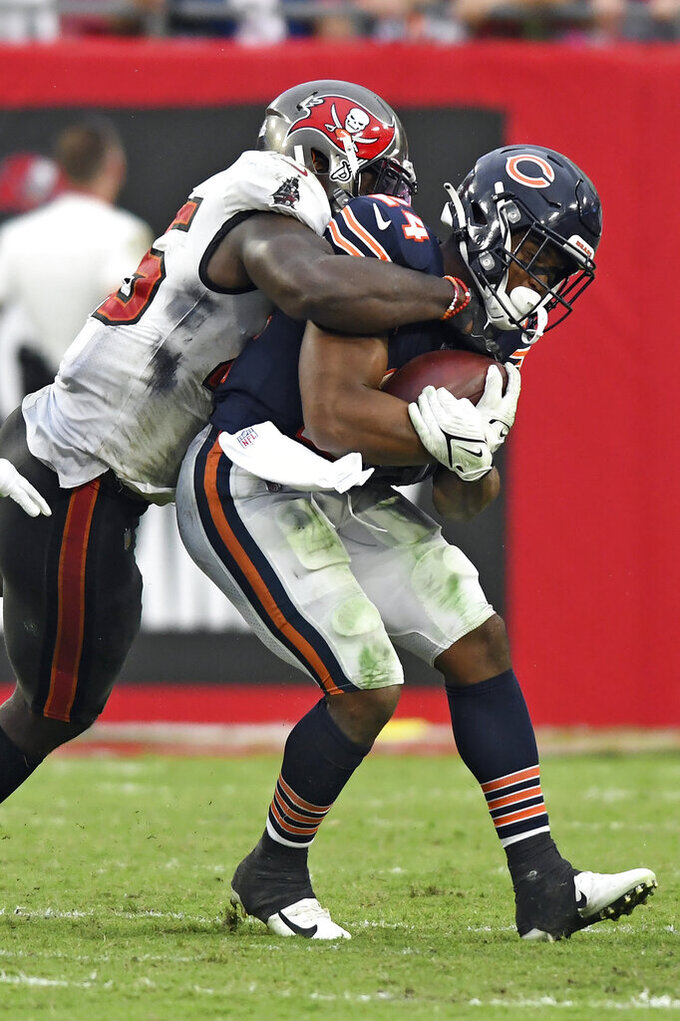 Chicago Bears running back Khalil Herbert (24) is stopped by Tampa Bay Buccaneers inside linebacker Devin White (45) on a run during the second half of an NFL football game Sunday, Oct. 24, 2021, in Tampa, Fla. (AP Photo/Jason Behnken)

LAKE FOREST, Ill. (AP) — Chicago Bears coach Matt Nagy insisted he understands why his comments about the team's closeness and unity might ring hollow to those on the outside.

A 38-3 beatdown by Tom Brady and the Tampa Bay Buccaneers didn't exactly scream togetherness. It showed just how wide the gap between the Bears and the reigning Super Bowl champions is.

The Bears (3-4) will try to steady themselves after back-to-back losses to rival Green Bay and the Buccaneers when they host San Francisco this week. But the past two games have been rough. They went from having Aaron Rodgers screaming “I still own you! I still own you!” to fans at Soldier Field in yet another loss to their rivals to simply getting blown away as soon as they stepped on the field at Tampa Bay.

Rookie quarterback Justin Fields committed five turnovers behind an overwhelmed offensive line, and the Bears suffered their most lopsided loss since Nagy was hired in 2018. That didn't stop the coach from saying afterward the team had “become as close as we have the last 24, 48 hours.”

Culture has been a buzzword around Halas Hall particularly since chairman George McCaskey cited it when announcing after last season Nagy and general manager Ryan Pace were being retained. But it's not translating into wins.

The Bears went 8-8 in 2020 for the second straight year since the 2018 team won the NFC North at 12-4. And the blowout in Tampa Bay was another low for a team that delivered one of the worst offensive performances the NFL has seen with 47 yards in a loss at Cleveland last month.

Fields, who threw three interceptions and lost two fumbles, wasn't sure what to make of it all.

“I’ve never been in this position,” he said. “Where I’m losing. So I don’t know how to feel. My only reaction to this is just to keep working. I’m not angry at all. At the end of the day, it happened. We have bad days. Y’all have bad days. And y’all can either get depressed. Or y’all can get up the next day and go to work.”

In two years at Ohio State following his transfer from Georgia, the Buckeyes were a combined 20-2. Their only losses were to Clemson in the 2019 Fiesta Bowl and Alabama in the national championship game in January.

The Bears consistently put their defense in tough spots, and the Buccaneers took advantage of the short fields.

Adding to Chicago's woes are COVID-19 issues that have gripped the team the past two weeks. They had four players on the COVID-19 list, including star linebacker Robert Quinn and veteran tight end Jimmy Graham, and Nagy announced Monday he tested positive.

The kicking game. Not much was working for the Bears against Tampa Bay. But Cairo Santos made his lone field-goal attempt, hitting a 28-yarder to give him 35 consecutive regular-season conversions and extend his club record.

The offense. The Bears were the only team averaging more yards rushing per game than passing through Sunday. And they ranked 30th in the NFL in scoring at 14.4 points on average.

Running back Khalil Herbert. The rookie had another solid outing, with a season-high 100 yards on 18 carries facing the NFL's stingiest run defense. That gave him 272 yards the past three games with David Montgomery (sprained knee) sidelined, and 279 on the season.

WR Allen Robinson. After being targeted four times and catching just two passes for 16 yards, Robinson has 23 receptions for 250 yards. That's well off his pace last season, when he finished with a career-high 102 catches for 1,250 yards. Robinson has been dealing with an ankle injury.

The Bears announced no injuries during the game, though they did place LB Caleb Johnson and RT Elijah Wilkinson on the COVID-19 list on Sunday.

11 — touchdowns the Bears have this season, tied with Houston for 30th in the league. That includes an interception return by linebacker Roquan Smith.

The Bears host the San Francisco 49ers this week.