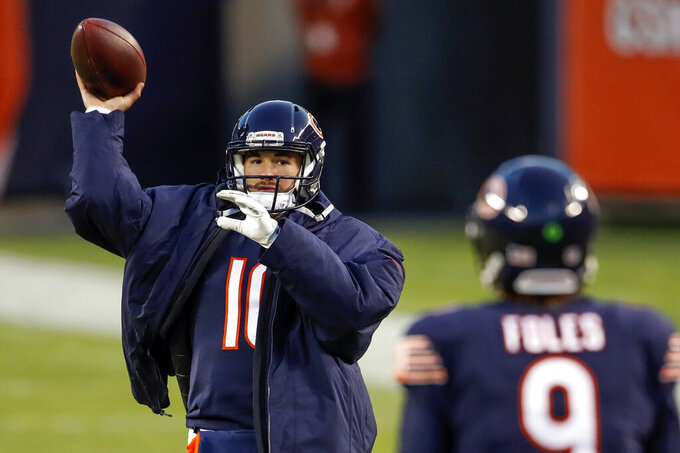 FILE - In this Nov. 1, 2020, file photo, Chicago Bears quarterback Mitchell Trubisky, left, warms up as he throws the ball to quarterback Nick Foles, right, during an NFL football game against the New Orleans Saints in Chicago. The college quarterbacks class is shaping up nicely, just in time to perhaps rescue some NFL teams from themselves. Those guys salivating about such prospects work in the personnel departments of the Jets, Jaguars and Bears. Maybe for the Lions, Patriots, Falcons, Saints and 49ers. (AP Photo/Kamil Krzaczynski, File)

Trubisky took all the first-team snaps at practice this week but Nagy had stopped just short of designating him the starter, just in case Nick Foles was able to return from a hip and glute injury. But Foles was unable to practice again Friday and Nagy turned to Trubisky.

The Bears are trying to end a four-game losing streak.

Nagy said it's still possible Foles could be the backup quarterback for the game.

Trubisky suffered a right shoulder injury Nov. 1 against New Orleans while he ran on a zone-read, his only play since being benched against Atlanta in Week 3. Foles’ injury occurred on a sack in the fourth quarter of a 19-13 loss to Minnesota on Nov. 16.

Nagy turned to Foles seeking a spark for his team's offense, and he rallied Chicago from 16 points down in the fourth quarter to beat Atlanta after Trubisky was benched. But the Bears are 2-5 with Foles as the starter, averaging 16.7 points per game.

Foles has completed 202 of 311 passes for 1,852 yards with 10 touchdown passes and eight interceptions. He has a quarterback rating of 81.0.

Trubisky is 51 of 86 for 560 yards with six touchdowns, three interceptions and a passer rating of 87.4. The Bears won both games that Trubisky started and finished, including a rally from 17 points down in the fourth quarter in the opener at Detroit.

By Rob Maaddi 16 minutes ago
By Josh Dubow an hour ago
By David Brandt 6 hrs ago
By Teresa M. Walker 6 hrs ago
By Tom Withers 17 hrs ago