Bears not making it easy on themselves despite 2-0 record 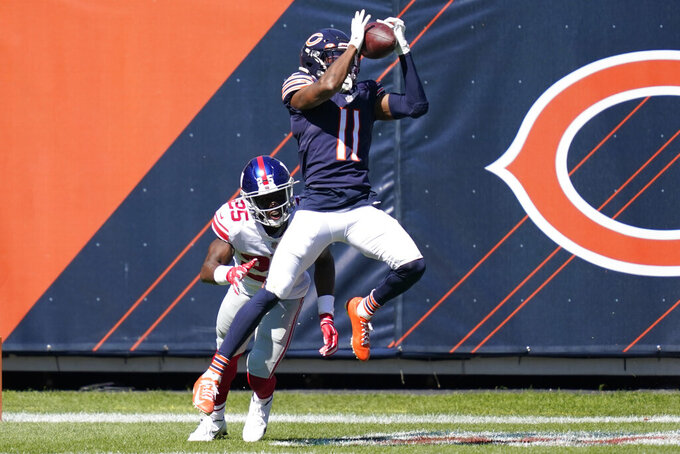 CHICAGO (AP) — The Chicago Bears are 2-0 for the first time since the 2013 team won the first three games. They're just not making it easy on themselves.

The Bears nearly blew a 17-point lead against the Giants, hanging on for a 17-13 win when New York's Golden Tate got flagged for pushing off Eddie Jackson on an incomplete pass as the final seconds ticked away. The late escape came after they rallied from 17 down to win the opener at Detroit.

“I would say we’re just OK right now. I think we expect a little better,” coach Matt Nagy said. “But I’m not criticizing our players and our coaches. That’s a part of being in the second week with no preseason. So, we have high expectations. And we want to be better. So I think that’s just speaks to who our guys are as people.”

Two narrow wins against teams not expected to contend for playoff spots haven't exactly inspired confidence around Chicago. If the Bears are going to bounce back from a disappointing 8-8 season, they clearly have room to improve.

A good time to start would be this week at Atlanta (0-2). The Falcons blew a 20-point lead at Dallas and lost 40-39 on a game-ending field goal.

The Bears had success on the ground for the second time in as many games.

David Montgomery carried 16 times for 82 yards, giving him 146 on the season. He also had a 28-yard touchdown catch on the game's opening drive.

The Bears have played three good quarters out of eight.

They picked up where they left off in the opener by jumping out to a 17-0 halftime lead against New York. But rather than put the game away in the second half, they nearly lost it. The Giants rallied even though star running back Saquon Barkley suffered a season-ending right knee injury at the start of the second quarter.

The fifth-round draft pick from Tulane caught three passes for the second time in as many weeks. He scored his first touchdown Sunday on a 15-yarder from Mitchell Trubisky to make it 17-0 with 14 seconds left in the first half.

“It was kind of like a scramble drill, and I thought he was going to throw it in the back corner,” he said. “It was a little short. But I knew I wanted the ball. I felt it coming to me. And then it was just securing the catch and doing a little bit of celebration afterward.”

Ted Ginn Jr. was a healthy scratch against New York after getting targeted just once without a reception in the opener. One reason the 35-year-old veteran was not active against the Giants was Mooney.

“I just wanna say that Ted Ginn has been really, really good for us in a lot of different ways and he’s going to become an important part of this team as we go," Nagy said. "And it’s nothing other than just probably numbers and where we were at personnel-wise today.”

The Bears suffered no major injuries in the first two games.

Running back David Montgomery hurt his neck in the second quarter Sunday when he landed headfirst on a short run after going airborne over New York's Austin Johnson, but returned in the second half.

Nagy said Monday there was “nothing significant” on the injury front.

The Bears look to match their best start in seven years, while the Falcons try to bounce back.