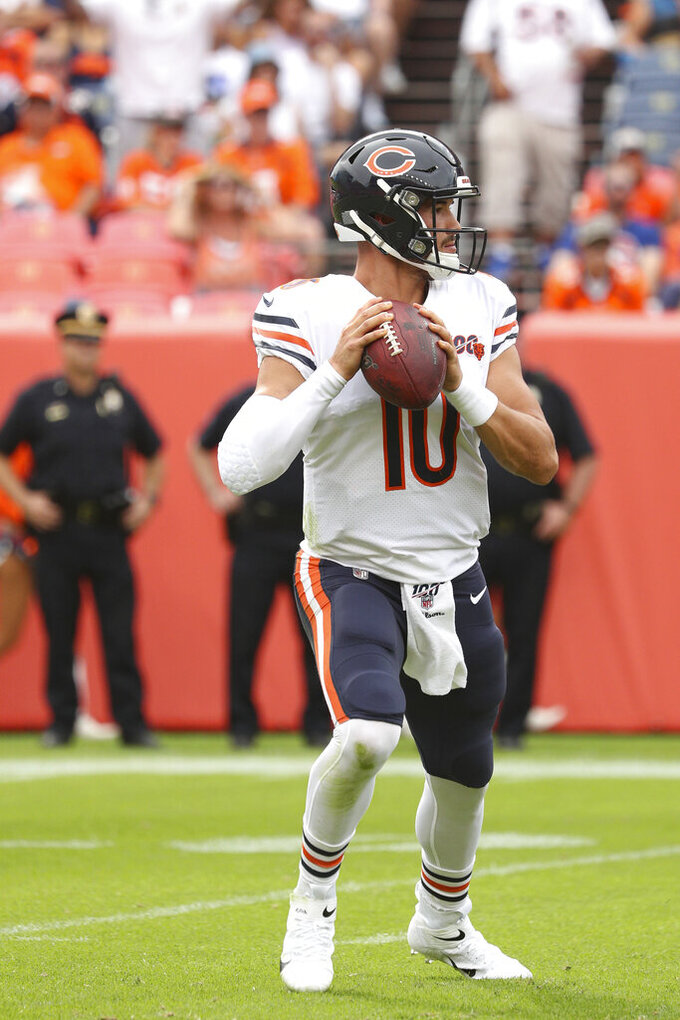 Chicago Bears quarterback Mitchell Trubisky (10) looks downfield for a receiver in an NFL game against the Denver Broncos, Sunday Sept. 15, 2019, in Denver. The Bears defeated the Broncos 16-14. (Margaret Bowles via AP) 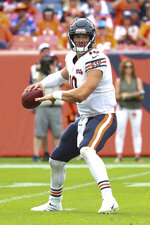 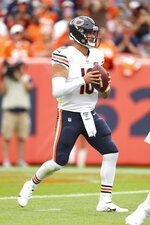 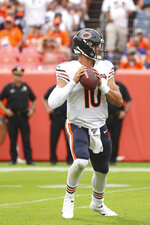 LAKE FOREST, Ill. (AP) — Quarterback Mitchell Trubisky is taking the heat after the Chicago Bears scored only 19 points in the first two games.

Teammates and coaches insist there's blame to go around for the poor start on offense as the Bears (1-1) get ready to try to find the end zone when they travel to face the Washington Redskins (0-2) Monday night.

"So we kind of had this last year in the beginning of the season where we had some offensive struggles on third down, not clicking," Trubisky said Thursday.

There are parallels to 2018, especially in yardage and the overall record. The Bears have only 12 fewer passing yards (328) and 26 fewer rushing yards (199) than last season after two games, when they were also 1-1.

The difference has been the point production and Trubisky's lack of consistent passing. They had 33 points from their offense last year at this time. Trubisky is coming off a 120-yard passing performance.

"Hopefully that is not us anymore," Trubisky said.

The problem is the Bears spent all offseason trying to convince everyone it wasn't their offense anymore and it has been. They are back near the bottom, ranked 30th in yardage and ahead of only the lowly Miami Dolphins in scoring.

"We went through a very similar deal here last year as this team and I think that in a lot of other different scenarios — different head coaches, and quarterbacks and offenses — there's a lot of examples out there that are very, very similar to what we are going through right now that have turned into pretty, pretty special places," Bears coach Matt Nagy said.

Yet, this was supposed to be Year 2 of Nagy's offense, the advanced 200-level course for Trubisky and all the players.

Instead, the defense has carried them and made the 16-14 win possible Sunday at Denver. Kicker Eddy Pineiro pulled it out with a 53-yard field goal as time expired.

"We can't keep doing that, but I like that we're going through some adversity right now," Nagy said. "I like that we got the win, I like that it's mentally callousing us.

"It's making us mentally tougher and when you can get mentally stronger and still win the game, you figure things out, you stick together, you become a lot stronger in the end and I think that's where we're at right now. We're learning from that."

Whether the Bears offense learns enough to do damage to the struggling Redskins defense starts with Trubisky, even if he isn't the entire reason for their struggles.

Trubisky sits near the bottom of all NFL starters with a 65.0 passer rating. His completion rate of 58.3 percent is worse than in both of his first two seasons.

The Bears' lone touchdown came on a 1-yard David Montgomery run against Denver.

"It's good, it's good," Trubisky said. "You just gotta believe this week is gonna be the week. So we haven't been executing the way we want to. There is definitely some things that we are missing on film but we're coming together and we're correcting them.

"The most important thing to me is that my guys still believe in me. I believe in myself and we're one unit, we're together"

The running game started coming together last week. Montgomery gained 62 yards, and they had 153 rushing yards thanks to a 46-yard run around left end by Cordarrelle Patterson.

Guard Kyle Long thinks staying with a block another second or two might open it up for Montgomery.

The passing game in Week 1 had been without tight end Trey Burton, a key contributor. He returned from a groin injury a bit wobbly last week and has been gaining strength.

Burton recalled the poor offensive start last year as being similar to this season, as well, and pointed out how they went to Arizona in Week 3 and won 16-14. It wasn't quite as dramatic as last week's 16-14 win in Denver, but close.

"(Nagy) reminded us about that a couple times, but the guys that were here know about it," Burton said. "All we've got to do is win."

The Bears went on to a 12-4 record then, but this offense has to indicate it can turn it around as it did last year.

"None of us are panicking by any means," Burton said.