Bears offensive problems starting to wear out their defense 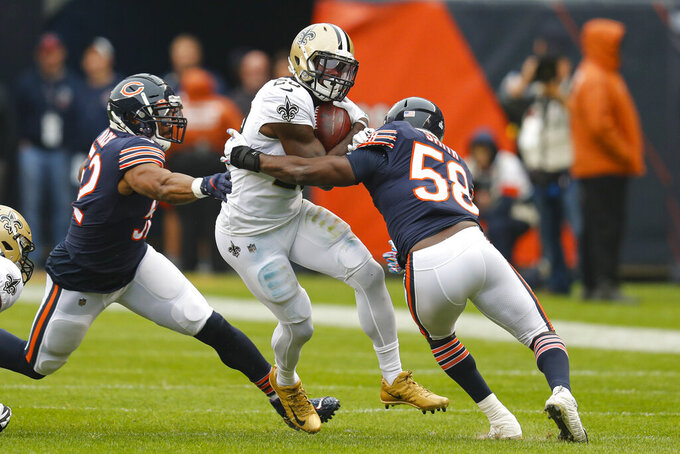 New Orleans Saints running back Latavius Murray (28) is tackled by Chicago Bears inside linebacker Roquan Smith (58) and outside linebacker Khalil Mack (52) during the first half of an NFL football game in Chicago, Sunday, Oct. 20, 2019. (AP Photo/Charles Rex Arbogast) 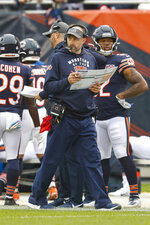 LAKE FOREST, Ill. (AP) — The lackluster Chicago Bears offense is taking a toll on its defense.

Quarterback Mitchell Trubisky didn't need to see his weary teammates on the other side of the ball after Sunday's 36-25 loss to New Orleans to know the offense is holding everyone back.

"I just feel like we're letting them down in a way by not doing our jobs," Trubisky said. "It starts with me doing my job better and going from there to help our defense out and ultimately to help our team win and do better on offense."

Chicago ran only seven times for 17 yards against the Saints. It had only four first downs through three quarters, helping the New Orleans' offense reduce what had been one of the NFL's strongest defenses to a worn-out, empty husk. Chicago's offense had only 22 ½ minutes of possession time to 37 ½ for the Saints and couldn't run or pass until late in the game when the Bears trailed 36-10.

The ground attack is particularly problematic. The Saints and Raiders ran it 74 times on the Bears in two games, while the Bears ran just 24 times.

The seven rushes were a franchise record low, but the Bears were gaining only a few yards on the ground at best early in the game. They also had a fumble by David Montgomery and Anthony Miller in their seven runs.

'There weren't a lot of runs and then we ended up getting behind in the second half," Nagy said. "But to have seven rushes and two fumbles — that's not good either. "

The defense had been among the league's best against the run, but in the past two games gave up 169 and 151 yards rushing after losing defensive end Akiem Hicks to an arm injury. Defensive players felt the Saints took control against them in the second half, and avoided citing weariness as a problem.

The kicking game is a huge plus for the Bears after they became synonymous with Cody Parkey's double-doink playoff miss last season. Eddy Pineiro is 9 of 10 on the year, including a 46-yard field goal against the Saints. He matched Parkey's start to last season, and now the Bears can only hope Pineiro goes on to keep making them.

The run blocking must start to open up before the Bears can begin to hand the ball off with confidence to Montgomery. The 17 yards rushing against New Orleans were the fewest by Chicago in 28 games, dating to a 31-3 loss at Philadelphia on Nov. 26, 2017, when they ran for 6 yards.

"Definitely we'd like to get the run game going," Trubisky said. "(It's) still an emphasis to help the pass game. But I wouldn't say it's one or the other. We're just out of sync and it comes down to execution."

Nagy also said he saw poor footwork by Trubisky while facing the pass rush. Trubisky was 34 of 54 for 251 yards.

"For me playing the position when you have sloppy footwork it can lead to other issues and I think that's what we saw is that," Nagy said.

Nagy said it's a difficult problem to correct in practice since Trubisky isn't facing a live rush then.

Cordarrelle Patterson ran a kick back 102 yards for a touchdown, tying for second-longest in team history. He is averaging 34.2 yards a return, and his career best was 32.4 as a rookie in 2013.

Outside linebacker Leonard Floyd had two sacks and four tackles in the opener against Green Bay. In five games since, he has no sacks, one hit on a quarterback and only seven tackles.

Defensive back Sherrick McManis has entered the NFL concussion protocol after suffering a concussion on a special teams play in Sunday's loss.

19. The number of receiving yards by Tarik Cohen on nine receptions against the Saints.

The Bears (3-3) host the Los Angeles Chargers (2-5) on Sunday, another team struggling to run. The Chargers have 106 yards rushing in their last three games and average 51.6 yards their last five.