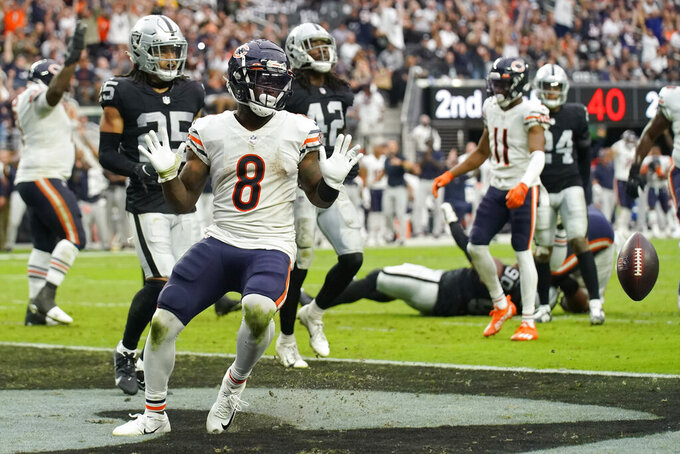 Chicago Bears running back Damien Williams (8) reacts after scoring at touchdown against the Las Vegas Raiders during the first half of an NFL football game, Sunday, Oct. 10, 2021, in Las Vegas. (AP Photo/Rick Scuteri)

LAKE FOREST, Ill. (AP) — The Chicago Bears placed running back Damien Williams on the reserve/COVID-19 list on Thursday, putting his status for their game against the Green Bay Packers in question.

The Bears (3-2) are already missing their leading rusher with David Montgomery on injured reserve because of a sprained knee.

Williams is second on the team with 137 yards and two touchdowns. He ran for 64 yards and a score last week, helping the Bears win at Las Vegas.

Williams, who scored two late touchdowns in Kansas City's Super Bowl 54 win over San Francisco, signed with the Bears in March after opting out of the 2020 season.

Linebacker Khalil Mack (foot) and receiver Allen Robinson (ankle) were held out of practice for the second straight day on Thursday.