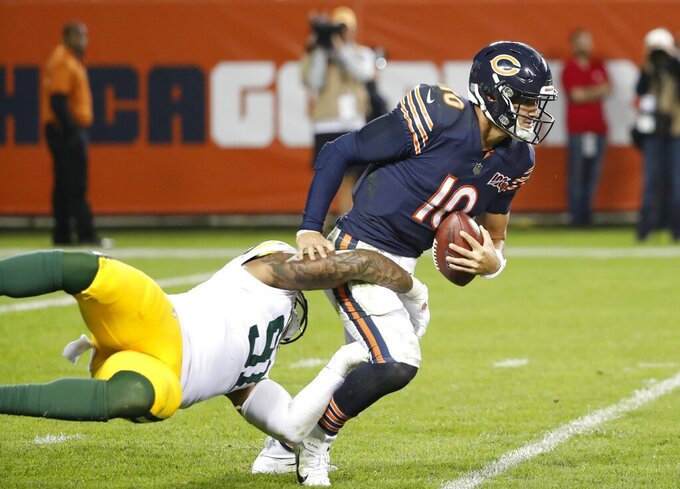 LAKE FOREST, Ill. (AP) — Mitchell Trubisky has been down this road before after a rough game as Chicago Bears quarterback.

A poor night against the Green Bay Packers in Thursday's season opener made for a difficult start to Trubisky's season in a 10-3 loss, and against Denver he'll seek to immediately rebound Sunday — as he's done often in the past.

"It was a long, weird weekend with playing on Thursday and just sitting on that (loss) for a couple days," Trubisky said. "You think about it a lot, and see what went wrong.

Trubisky completed 26 of 45 for 228 yards, with a crucial interception in the end zone to seal the loss. The Bears reached the red zone only twice, once on a field goal early and then on the drive ending with the interception.

The Bears were inches from breaking several big plays early and making it a different game, Trubisky found after watching film.

"Sometimes the ball just doesn't bounce your way but you've just got to bounce back, and that's what we're trying to do with that week," Trubisky said. "And we're trying to get those inches to go our way to make sure that we're doing our jobs and we're going out there and having fun."

Trubisky had a 62.1 passer rating against the Packers. Nine times Trubisky has followed a passer rating of 77.2 or worse with a rating in the 80s or higher the next week. The Bears went 8-1 in those nine games.

The only times Trubisky hasn't quickly recovered from a poor effort came twice when he didn't play the next week.

"We're still positive about it," Trubisky said. "We're still confident in what we can be as an offense, and we just gotta go out there and play that way this week."

Bears coach Matt Nagy isn't calling it a Mitchell Trubisky problem as much as a Bears offensive problem overall.

To Trubisky, problems with Chicago's offense last week stemmed more from preparation than something on the field.

"It's kind of hard to see on tape," Trubisky said. "I think it's like the in-between stuff, the overall focus, studying and being in our (play) books maybe too much at times; and everybody not being on the same page.

"So I think we just need to tighten down. Everybody focus in a little more, a little more sense of urgency in and out of the huddles, better communications on the sideline and in the huddle so we have more time to operate at the line of scrimmage, and then just playing fast."

Trubisky wasn't alone in absorbing blame. The running game accounted for only 46 yards and the Bears had 10 penalties for 107 yards.

Guard Kyle Long chose to look at the other side of a horrendous start.

"The positive is that there's so much room for improvement it's awesome," Long said.

The Bears hope Trubisky can benefit from getting starting tight end Trey Burton back from a groin injury. Burton was only able to practice Wednesday on a limited basis, as he did prior to missing last week's game.

If Trubisky and the offense are to rebound, they'll have to do it under difficult conditions on the road and against their former defensive coordinator, Broncos coach Vic Fangio.

Denver struggled in a 24-16 loss at Oakland on Monday night, but the Bears anticipate Fangio will use every bit of his experience in Chicago against them.

"We can't prepare for what he does know or what he doesn't know," Bears wide receiver Allen Robinson II said. "We've got to go out there and do what we do."

The answer to Nagy in getting Trubisky ready to face Fangio's deceptive pass coverage schemes is to keep it simple.

"I think that's where, if you start getting too crazy with too much volume of plays, then you don't become an expert at that play," Nagy said. "And that's what I want to make sure I help Mitch do."