Bears QB Mitchell Trubisky will be a game-time decision 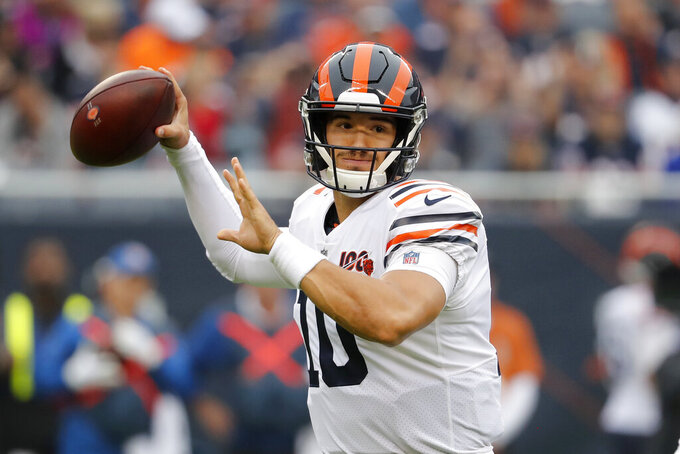 FILE - In this Sept. 29, 2019, file photo, Chicago Bears quarterback Mitchell Trubisky throws during the half of an NFL football game against the Minnesota Vikings, in Chicago. The Bears envisioned Trubisky showing why he was drafted with the No. 2 overall pick in 2017 and a more dynamic offense helping take the load off one of the NFL’s best defenses in coach Matt Nagy’s second season. So far, it’s not happening. (AP Photo/Jeff Roberson, File)

LAKE FOREST, Ill. (AP) — Chicago Bears quarterback Mitchell Trubisky, who has been out since Sept. 29 with a left shoulder injury, will be a game-time decision Sunday against the New Orleans Saints, even after he practiced all week without limitations.

Trubisky was injured early in the Bears' 16-6 victory over the Minnesota Vikings. Chase Daniel relieved Trubisky in that game and started the next game for Chicago (3-2), a loss to the Oakland Raiders. The Bears are coming off a bye.

"He's been doing good in practice," coach Matt Nagy said of Trubisky. "I like where he's at.

"We said early in the week it's going to be like a day-by-day thing. So far, he's stacked good days together."

Nagy expressed some uncertainty and didn't want to announce Trubisky as the starter ahead of Daniel. Trubisky took all the first-team snaps Friday at practice.

"Without saying he's going to be the guy, I feel good that he could be the guy."

Trubisky will play with a harness on his left shoulder, but the Bears don't think the right-handed passer will be affected by it. The question is whether Trubisky can take a hit.

Nagy said he knows Trubisky will be hit at some point if he plays, and his advice is to be cautious.

The Bears also have reason to be concerned about how Trubisky will play after not seeing game action for three weeks. He had a similar three-week absence last year and returned to record his lowest single-game passer rating — 33.0 — against the Rams in a 15-6 victory.

"That's a good defense that they (Rams) have," Nagy said. "There was probably a little bit of rust coming back."

If Trubisky plays, he will have the services of wide receiver Taylor Gabriel, who has recovered from a concussion and will be available after missing the last two games.